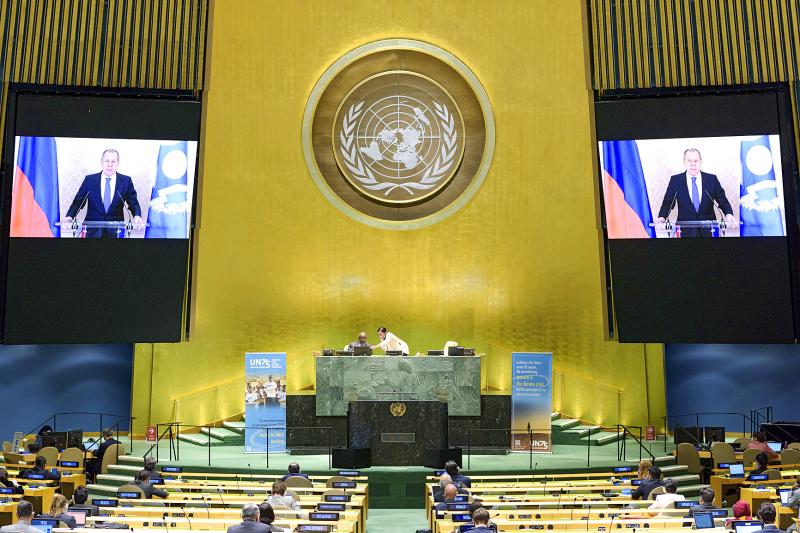 The UN’s first virtual meeting of world leaders started yesterday with pre-recorded speeches from some of the planet’s biggest powers, kept at home by the COVID-19 pandemic that is likely be a dominant theme at their video gathering this year.

Leaders have been invited to send in pre-recorded messages, to be played over the coming week in the vast General Assembly hall, where each delegation can send a single masked diplomat.

Among those scheduled to speak yesterday were US President Donald Trump and Brazilian President Jair Bolsonaro, whose countries have reported the highest and second-highest COVID-19 death tolls respectively, as well as Chinese President Xi Jinping (習近平) and Russian President Vladimir Putin.

After Monday’s introductory session marking the UN’s 75th anniversary, the meeting’s central event — speeches from each of its 193 member nations — started yesterday.

“When we met in New York a year ago, no one could have imagined that 2020 would arrange such a powerful crash test for our world,” Ukrainian President Volodymyr Zelenskiy said in his video speech for Monday’s anniversary commemoration.

Russian Minister of Foreign Affairs Sergey Lavrov used his speech to complain about countries using sanctions to meddle in the domestic affairs of other nations, saying that such penalties hamper an effective worldwide response to issues such as the pandemic, climate change, military conflicts and terrorism.

In a speech delivered when it was early yesterday in Moscow, but still Monday in New York City, Lavrov said in a speech on behalf of the Collective Security Treaty Organization, which consists of Russia, Belarus, Armenia, Kazakhstan, Kyrgyzstan and Tajikistan, that the attempts by some countries to “meddle in the domestic affairs of other states, using unilateral sanctions” interfere with addressing “challenging threats the world is facing today.”

A record number of heads of states and governments are due to speak at the virtual meeting, rather than sending ministers or diplomats.

That is a good thing, “but the idea that prime ministers and presidents are going to be sitting at home with a bucket of popcorn watching each other’s televised speeches is a bit silly,” said Richard Gowan, who oversees UN issues for Crisis Group, a Brussels-based think tank.

The UN is also moving ahead with thematic meetings — also virtual — on the sidelines of the summit to tackle major issues including the pandemic as well as climate change, biodiversity and the political turbulence in Libya and Lebanon.