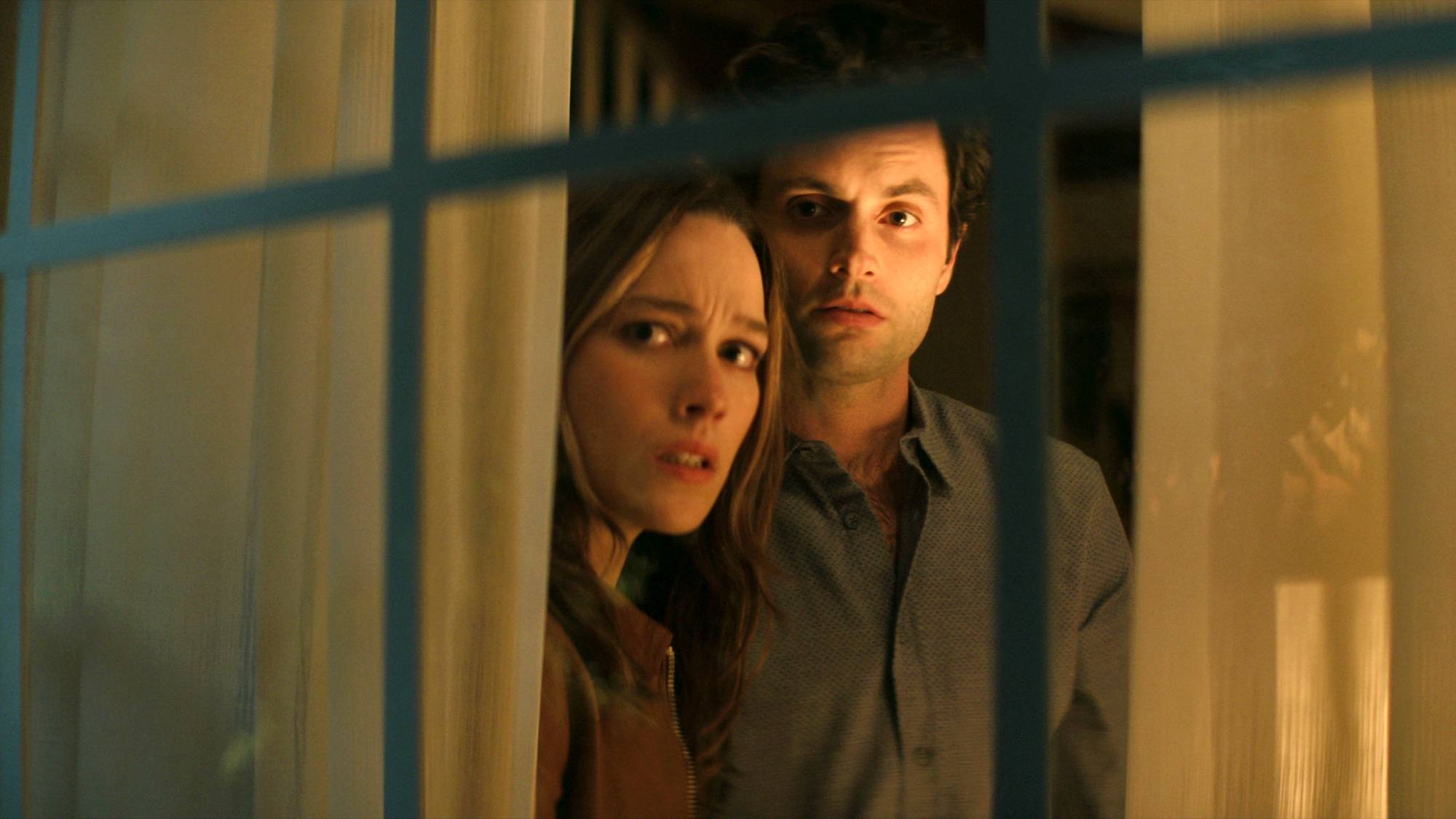 Halloween is just around the corner, so this weekend’s new movies and TV shows provide plenty of thrills and chills. Prepare for fright nights on Netflix, Disney Plus, Peacock and other streaming services.

The weekend lineup is led by You season 3, which continues the creepy story of stalker/killer Joe Goldberg. He’s become a dad and moved to the suburbs, but that doesn’t stop him from finding a new obsession. Then there’s Halloween Kills, the latest film in the franchise, which finds Laurie Strode still facing off against slasher Michael Myers. And for younger viewers, Just Beyond is a mildly-spooky anthology series from the mind of R.L. Stine.

In non-Halloween content, Dopesick is a star-studded fictionalized account of the rise of OxyContin and the opioid crisis. The documentary Velvet Underground chronicles the iconic band’s formation and influence. And Succession season 3 is here with more cutthroat antics from the billionaire Roys.

And that’s not all: There are a ton of new TV shows and specials available on broadcast and cable. If you’ve cut the cord, just sign up for one of the best cable TV alternatives for access to your favorite channels.

Here are our picks for the new movies and TV shows to watch this weekend.

Season 3 premiere | Episodes 1-10 (TV-MA) | Watch now
Serial killer Joe Goldberg is married, has a baby and lives in the suburbs, so one would think he’s reformed his murderous ways. Well, you would be wrong. The tension with wife Love Quinn (Victoria Pedretti), the pressure of parenting and the ennui of cul-d-sac life all push Joe back to his stalking shenanigans. His new target is neighbor Natalie (Michaela McManus). Poor thing has no idea she’s just the next in a long line of Joe’s victims. Or maybe she’ll be offed by a jealous Love. Let us not to the marriage of truly deranged minds admit any impediments … to a non-stop binge.

Movie | 1 hr 46 min (R) | Watch now
Jamie Lee Curtis is back, again, in this sequel to 2018’s Halloween, which saw the actress reprise her role as Laurie Strode. The action picks up right where the previous flick left off — killer Michael Myers (Nick Castle) has escaped Laurie’s trap and is continuing his bloody spree. An injured Laurie fights through the pain to rally the residents of Haddonfield to fight back against Michael. The Strode women, including Laurie’s daughter, and other survivors form a vigilante mob in a bid to end his reign of terror once and for all.

I Know What You Did Last Summer (Amazon Prime Video)

Series premiere | Episodes 1-4 (R) | Watch now
No hit movie or show is sacred and beyond a reboot, not even the 1997 film starring luminaries Jennifer Love Hewitt, Sarah Michelle Gellar, Ryan Phillippe and Freddie Prinze Jr. Like that adaptation, this series is based on Lois Duncan’s 1973 novel and follows a group of teens who are involved in a deadly car accident on graduation night. They promise to cover it up and go their separate ways. A year later, they start receiving threatening messages from someone who, well, knows what they did last summer. As the teens work to identify their stalker, they uncover dark secrets about their town.

Series premiere | Episodes 1-3 (TV-MA) | Watch now
The American tragedy that is the opioid epidemic is chronicled in a harrowing limited series adapted from the book Dopesick: Dealers, Doctors, and the Drug Company That Addicted America. The story traces the rise of OxyContin, made by Purdue Pharma. The sprawling cast of characters is led by a rural physician (Michael Keaton) who is reluctant to prescribe the drug and his patient, a young coal miner (Kaitlyn Dever) who becomes addicted to it. There’s a persistent Purdue sales rep (Will Poulter) and profit-seeking company chief Richard Sackler (​Michael Stuhlbarg), as well as a DEA agent (Rosario Dawson) and U.S. Attorney (Peter Sarsgaard) mounting a case against Purdue.

The Velvet Underground (Apple TV Plus)

Documentary | 2 hr 1 min (R) | Watch now
The pioneering band gets the documentary treatment, but fittingly, in an unconventional way by the provocative director Todd Haynes. The film traces the band’s rise in the 1960s, when downtown New York was throbbing with avant-garde art, film and music. Visually, Haynes deploys a psychedelic treatment that recalls the band’s early shows, which were staged by Andy Warhol. There’s also the more typical footage and interviews, including with founding member John Cale, that show how Velvet Underground paved the way for glam rock, punk and later innovations.

Season 2 premiere | Episodes 1-8 (TV-G) | Watch now
The Baby-Sitters Club emerged last year as a refreshing, wholesome, yet thoroughly modern take on the beloved book series. Season 2 doubles down on the authentic issues and strong relationships that make the show so good. The club’s year kicks off with Kristy dealing with her mom’s marriage to Watson and her new blended family. Mary Anne is dealing with her new boyfriend. Stacey gets to put on a fashion show but still has to manage her diabetes, while Claudia experiences a family tragedy. Meanwhile, new members Jessi and Mallory enter the fray and discover baby-sitting can be as difficult as it is rewarding.

Just Beyond (Disney Plus)

Series premiere | Episodes 1-8 (TV-PG) | Watch now
R.L. Stine’s graphic novels come to somewhat-spooky life in an horror/comedy anthology of the same name. The eight episodes follow different teens in situations “just beyond” reality, where they encounter ghosts, aliens, witches and parallel universes. The supernatural elements are mixed with relevant themes such as bullying, anxiety and social media. Think of it like The Twilight Zone, but for kids and young adults. The stories are only mildly scary, and suitable for ages 7 and up.

Series premiere| Episodes 1-2 (TV-MA) | Watch now
Kate Beckinsale stars in this dark comedy as award-winning journalist Beth Baker, who is disgraced in a scandal and forced to work at a clickbait website. In a bid to revive her reputation and career, she latches onto a lead about young Black woman named Toni (Jules Latimer) who claims she was falsely convicted for her husband’s murder. Her case is a stew of racial injustice, corruption and murder that’s seeming designed to make headlines. The show has a satirical tone, but it’s serious about examining how Beth’s selfish motivations and privilege conflict with the harsh reality of Toni’s situation.

Special | 55 min (TV-MA) | Watch now
Phoebe Robinson is a true multi-hyphenate: comedian, podcaster, actress, screenwriter and bestselling author. You may be familiar with her hilarious podcast 2 Dope Queens with Jessica Williams. Robinson’s first solo stand-up special finally gives her the spotlight she has long deserved. Sorry, Harriet Tubman touches on everything from the pandemic to interracial dating to hanging out with Michelle Obama.

Season 2 premiere | Episodes 1-10 (TV-MA) | Watch now
Over two years have passed since the sci-fi drama left off on a dramatic cliffhanger. The alien race called the Achaia destroyed the planet Zakir and set its sights next on Earth. On the spaceship Salvare, Captain Niko Breckinridge (Katee Sackhoff) struggles with how to negotiate with the Achaia now that they’ve witnessed such brutality. If diplomacy doesn’t work, she’ll have to lead her crew in a race back home to save humanity from a similar fate.

Season 4 premiere | Episode 1 (TV-MA) | Watch now
Detective Harry Ambrose is back, but he’s not on the case — at least, at first. He’s still suffering from PTSD triggered by the events of season 3 and wrestling with his inner demons. His partner suggests they go on a relaxing getaway to the New England coast, where he unexpectedly gets caught up in a mystery. He crosses paths with Percy Muldoon (Alice Kremelberg), heir to her family’s fishing empire, then sees her seemingly fall to her death. But a body is never found and Ambrose is drawn into the investigation.

Season 7 premiere | Episode 1 (TV-MA) | Airs Sunday, Oct. 17 at 9 p.m. ET
The OG Walking Dead is in the midst of its final season, and so is young adult spinoff World Beyond. Fear the Walking Dead may soon be the only series left in the franchise. So much has changed since the show first debuted, but fans can always count on more zombies popping up everywhere. Season 7 sees Morgan’s group in Texas trying to survive the nuclear fallout triggered by Teddy and his followers. Yeah, on top of the zombie apocalypse, everyone now has to deal with a nuclear one. The premiere episode is streaming now after dropping a week early on AMC Plus.

Season 3 premiere | Episode 1 (TV-MA) | Airs Sunday, Oct. 17 at 9 p.m. ET (Watch on HBO Max)
The lifestyles of the rich and the Roys are once again on display in the third season of Succession, the premier example of the genre “wealthy people who are fascinating in their horribleness” (see also: The White Lotus). All of the Roys are awful — and I love each and every one of them. The story picks up where it left: the immediate aftermath of Kendall throwing his father under the corporate bus for the cruise line scandals. Of course, this means war, with both Logan and Kendall attempting to marshal the troops aka their family members to their side. Shiv and Roman have their own agendas, per usual. The new episodes bring in some fresh faces, Alexander Skarsgard and Adrien Brody. Bring on all the tall men!