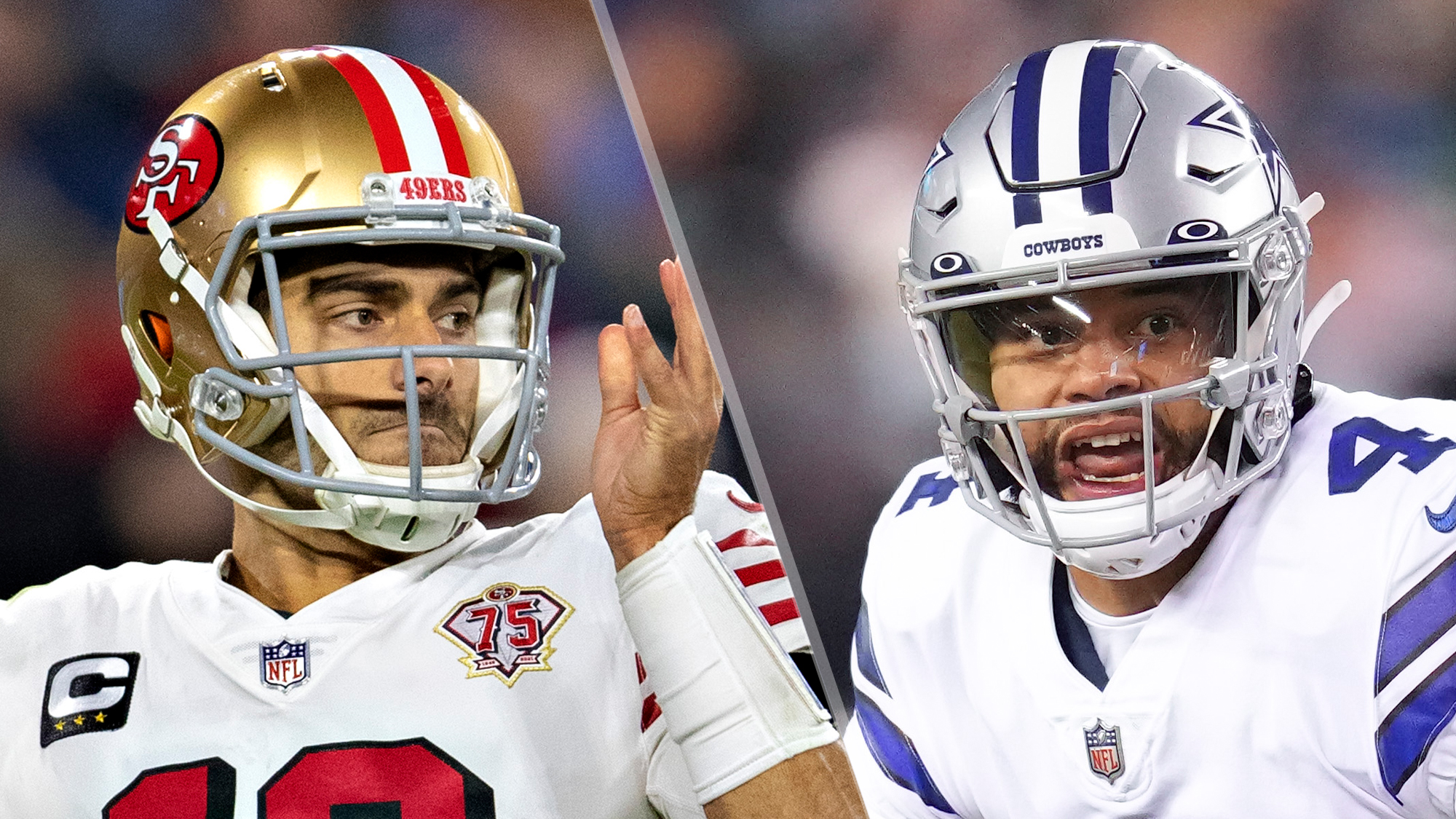 The 49ers vs Cowboys live stream is coming up today, and it features a classic NFC playoff matchup between these historic franchises. This time around it will be the NFC East Champion Cowboys and Dak Prescott against Jimmy Garoppolo and the sixth seeded Niners kicking it off in this NFL live stream.

The 49ers (10-7) just squeaked into the playoffs following a 27-24 overtime win over the Rams in week 18. The win featured 21 second-half points by the Niners and a game winning field goal in overtime. A San Francisco loss, coupled with the New Orleans Saints winning their final game of the season, would have bounced the 49ers from postseason contention.

After missing the playoffs last year the Niners started this season just 3-5. Then the turnaround started which included a 7-2 finish to the season. Garoppolo shook off a torn ligament late in the season to help the team rally to comeback in the week 18 win. Wide receiver Deebo Samuel has been the team’s go-to player. The soon-to-be 26-year-old was fifth in the NFL in receiving with 1,405 yards while he also caught six touchdowns, ran for eight and threw for another. That’s a full year!

The Cowboys (12-5) are in the playoffs for the second time in the Dak Prescott era and it would be harder to find a team hotter than Dallas as the postseason gets underway. Prescott and company ended the regular season with two 50-point games in the final three weeks of the year. They beat Washington 56-14 in week 16, then beat the Eagles 51-26 to wrap up their season.

Prescott showed no ill-effects from the broken foot that ended his season in week five last year, or from the shoulder strain he suffered this past training camp. He threw for a career-high 37 touchdowns, posted a 100-plus passer rating for the first time since his rookie season (104.2) and led the Cowboys to the second-best passing attack in the NFL with 282.4 passing yards-per-game. Only the Tom Brady-led Bucs averaged more yards through the air per-game than the Cowboys.

The Cowboys are 3-point favorites against the 49ers. The over/under is 51.

How to watch 49ers vs Cowboys live stream from anywhere

If you’re away from home and can’t watch 49ers vs Cowboys you can still see the game. Using the best VPN makes it so that you can appear to be surfing the web from your home town, so you can access the same streaming services you already pay for.

49ers vs Cowboys live streams in the US

In the U.S., the 49ers vs Cowboys live stream is going to be broadcast on CBS, which is available with most cable packages and on one of our favorite streaming services: fuboTV.

You can get your local CBS network’s NFL games via Paramount Plus, if you want.

So, that makes it really easy to recommend where cord-cutters should turn to watch the NFL season: Fubo TV. Built for all things sports, Fubo has all three of those local broadcasters, plus ESPN and NFL Network. That’s why it’s one of the best streaming services.

Sling TV doesn’t have CBS (not without AirTV at least), so while that’s one of our favorite services, it’s not ideal for football fans.

Paramount Plus combines what used to be CBS All Access with even more content from the deep ViacomCBS vault. Get access to Survivor and Big Brother episodes, as well as originals like Star Trek: Picard and The Good Fight. And more great stuff is on the way, including Frasier and Criminal Minds revivals.

With one of our best TV antenna picks you can watch live for free if — and only if — your local CBS affiliate is showing 49ers vs Cowboys.

49ers vs Cowboys live streams in the UK

American football fans across the pond can watch 49ers vs Cowboys on Sky Sports, the typical home to more than 100 live games per NFL season.

Get in, folks, we’re going to Da Zone. Or to be more specific, Canadian football fans will need DAZN to watch 49ers vs Cowboys live streams in Canada.