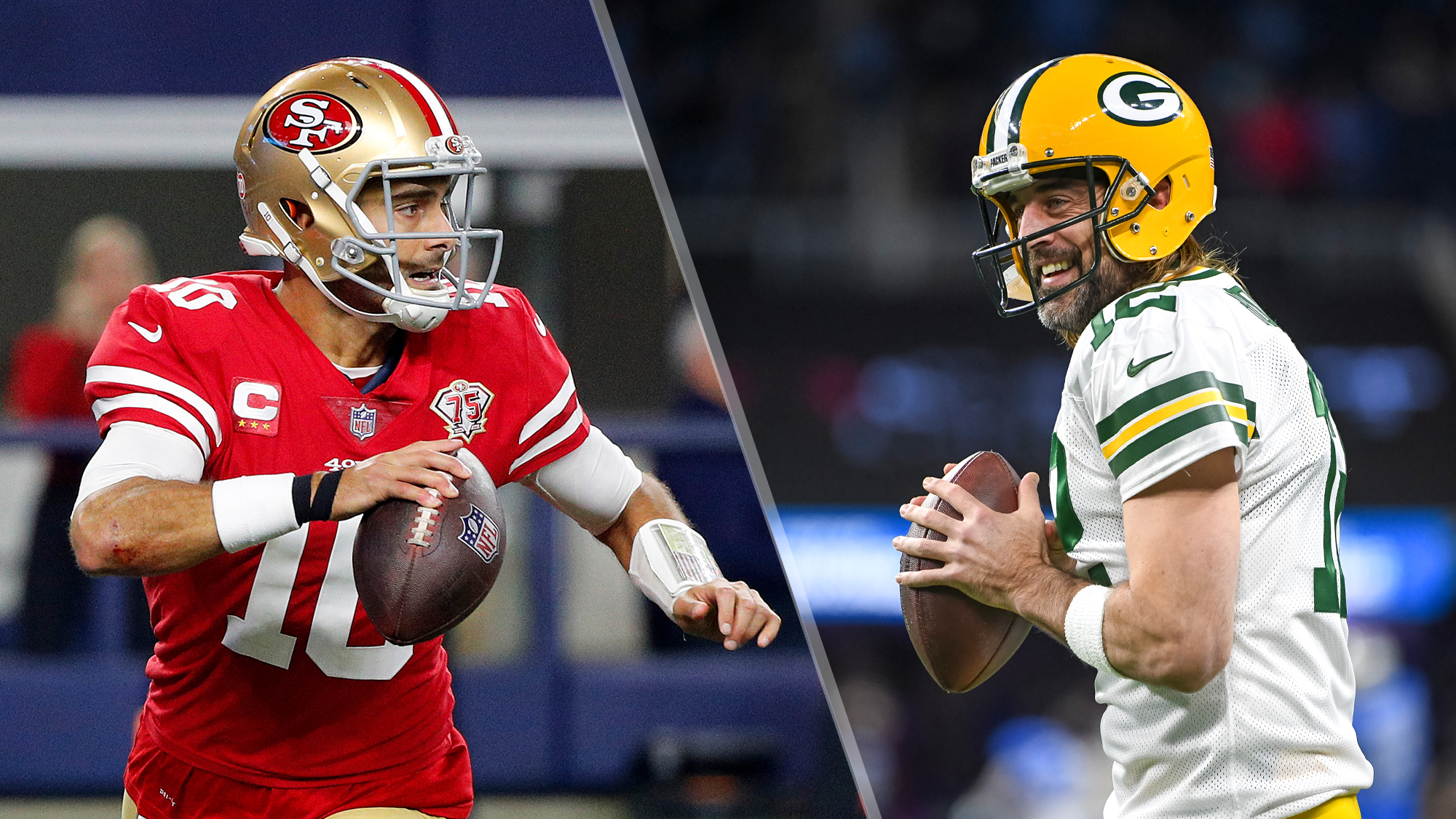 The 49ers vs Packers live stream is starting soon, and it has Aaron Rodgers looking for his sixth trip to a conference championship game.

Rodgers lost to his Saturday night counterpart, Jimmy Garoppolo, in the 2019 postseason as San Francisco was en route to a Super Bowl appearance. But this is a different and more dominant Packers team in this NFL live stream.

The 49ers (10-7) are proud owners of the wild card rounds’ only upset victory as they held on to beat the Cowboys, 23-17. The very versatile Deebo Samuel came up with a 26-yard touchdown run that gave San Francisco a 23-7 lead with 3:03 to go in the third quarter. The Niners then survived a late surge from Dallas to clinch the win. Samuel finished with 110 yards from scrimmage.

Despite the late push from the Cowboys, the 49ers’ defense came to play. Charles Omenihu, who had zero sacks through the regular season came up with a sack and half against Dallas. In total, the Niner D brought Dak down five times in the win. San Francisco is waiting to hear word on Nick Bosa who left the wildcard game after suffering a concussion. Bosa was fourth in the NFL with 15.5 sacks.

The Packers (13-4) are the NFC’s top seed and had the luxury of resting during last week’s opening round. Now they will start their quest in making a third-straight NFC Championship appearance. Green Bay has already been to five conference championship games in Aaron Rodgers’ 14 years as their starting quarterback. They’re just 1-4 in those games.

These teams did play in week three of the regular season with the Packers winning 30-28. Green Bay took a 17-0 lead into halftime before the Niners fought back in the second half and even took a 28-27 lead with :37 left on the clock. Then Rodgers hit Davante Adams twice for a total of 42 yards and that was all Mason Crosby would need to drill the game-winning 51-yard field goal.

The Packers are currently 5.5-point favorites against the 49ers. The over/under is 47. Temperatures in Green Bay Saturday night are expected to be below 10 degrees with wind gusts up to 18 m.p.h.

49ers vs Packers live streams in the US

In the US, 49ers vs Packers is going to be broadcast on FOX, which is available with most cable packages and on two of our favorite streaming services fuboTV and Sling TV.

If FOX, ESPN, NBC and NFL Network have typically been enough to get you all the football you need, you could rely on Sling (which doesn’t include CBS, and RedZone is available with the Sports Extra add on). You can get your local CBS NFL games via Paramount Plus, if you want.

It’s a case of “you get what you pay for” as Sling Orange & Blue (which you’d need to get ESPN, FOX, NBC and NFL Network) costs $50 per month, while the Fubo TV Standard package gives you all of the above, for $65 per month.

If you can stand to miss CBS games, Sling TV provides a middle ground — and there’s a 3-day free trial! The $50 per month Sling Orange + Blue package has NBC affiliates for this game, as well as local FOX affiliates plus ESPN.

How to watch 49ers vs Packers from anywhere

If you’re away from home and so can’t watch the 49ers vs Packers live stream, you can still see the game. Using the best VPN makes it so that you can appear to be surfing the web from your home town, so you can access the same streaming services you already pay for.

With one of our best TV antenna picks you can watch live if — and only if — your local FOX affiliate is showing 49ers vs Packers.

49ers vs Packers live streams in the UK

American football fans across the pond can watch 49ers vs Packers on  Sky Sports, the typical home to more than 100 live games per NFL season.

Get in, folks, we’re going to Da Zone. Or to be more specific, Canadian football fans will need DAZN to watch 49ers vs Packers live streams in Canada.