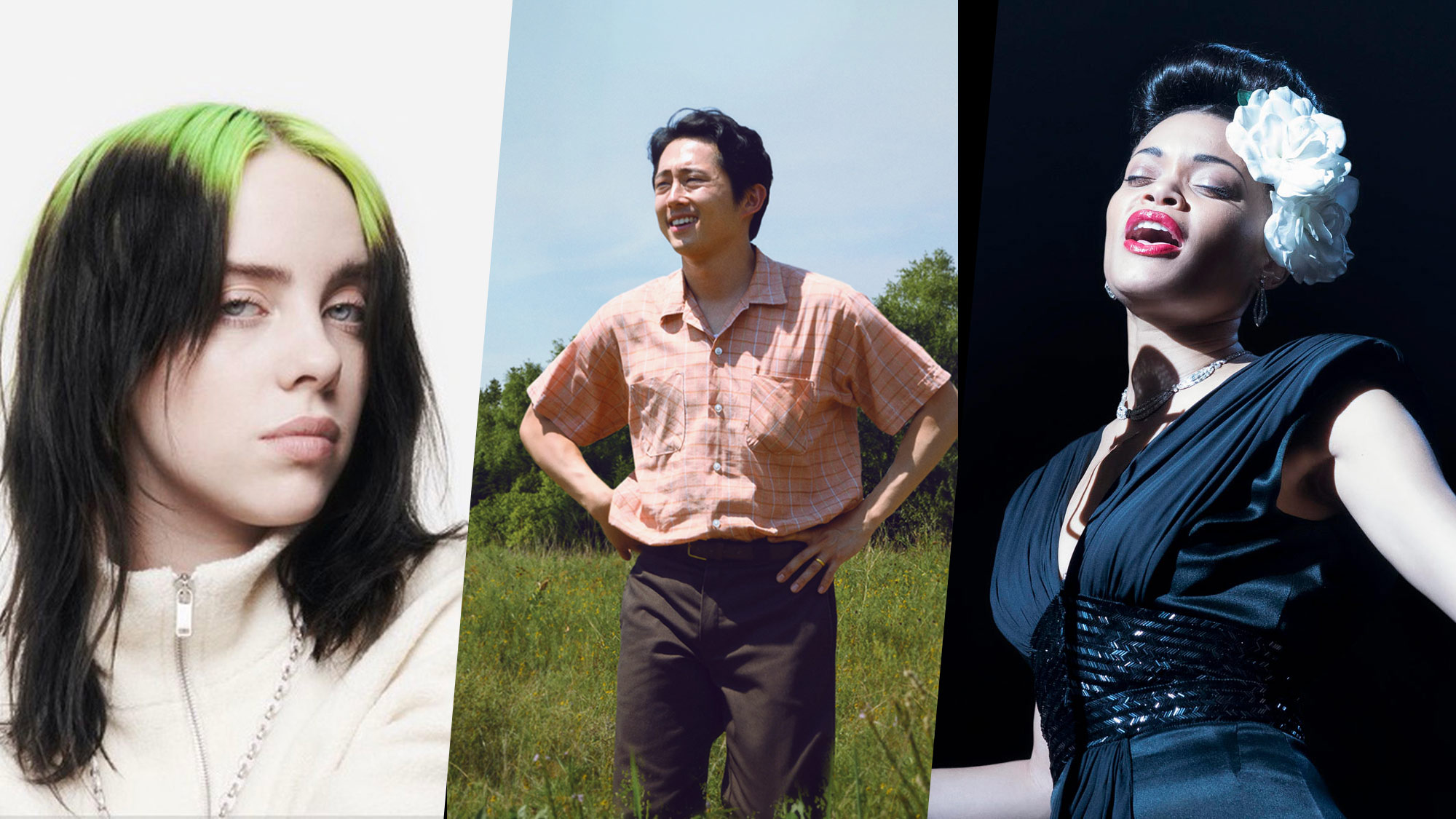 Want to know what to watch? Awards season has delivered us a bountiful number of excellent new movies and TV shows to stream this weekend. Yes, even though this year’s awards shows are starting later, we’ve still got a lot of films to watch to prepare. And almost all of the major streaming services have new releases to offer, including Netflix, Hulu, Apple TV Plus and HBO Max.

Our selections include two films that are likely to bag Oscar nominations, as well as a bingeable popcorn dramedy and a documentary about one of music’s biggest stars. Not to mention, WandaVision episode 8 is streaming now on Disney Plus. It’s the penultimate installment of the Marvel series, so you don’t want to miss out.

Streaming now on Netflix
If Ginny and Georgia sounds a bit like Gilmore Girls, with its central mother-daughter relationship, it’s because the show itself wants you to draw the comparison. Georgia (Brianne Howey) is a hot-mess, trophy-wife type who had 15-year-old Ginny (Antonia Gentry) at the same age. They move to a new town, where Ginny finally (and happily) finds friendship and romance and Georgia sets her eyes on the handsome mayor (Scott Porter). But there’s more going on to this story than typical teen troubles or mother-daughter conflict; Ginny and Georgia tosses in some criminal intrigue to spice things up. The show checks off so many genre boxes that it may be the perfect product for Netflix’s algorithm.

Starts streaming Friday, Feb. 26 on VOD
The drama about a Korean-American immigrant family was unfairly categorized by the Golden Globes as a foreign film (as we said, they’re problematic), but it’s cruising toward an Oscar bonanza. The film is getting rave reviews for its quiet and elegant storytelling, Steven Yeun’s lead performance and an adorably sassy grandmother/grandson duo. When A24 released Minari in its virtual theater a couple of weeks ago, most screenings sold out. Now, the wider digital release gives you the best chance to watch the likely Oscar nominee.

Airing Sunday, Feb. 28, 8 p.m. ET on NBC
It feels weird to watch an awards show after the pandemic delayed most of 2020’s biggest movies. And the Globes will be especially awkward after  reports have brought to light the fact that the Hollywood Foreign Press Association doesn’t have a single Black member. The Golden Globes have always been problematic, but they’ve thrived by being the most fun of all awards shows thanks to free-flowing champagne and mashing up movie and TV stars in pairs at the podium.

This year’s ceremony won’t even have those highlights, since nominees will beam in remotely. But we’re still looking forward to whatever biting commentary that hosts Tina Fey and Amy Poehler deliver, even if they are doing it separately from opposite coasts. Check out our guide on how to watch the Golden Globes if you are looking for where to watch them online after cutting the cord.

Starts streaming Friday, Feb. 26 on Hulu
Under-the-radar singer Andra Day is deservedly getting time in the spotlight for her magnetic performance as the jazz legend in this biopic. The story follows Billie as most knew her: a tremendous performer. But it also shows her as a drug addict targeted by federal narcotics agents. As Billie struggles with fame and her heroin problem, she also unknowingly falls for an undercover agent (Trevante Rhodes). The outcome may be tragic but Billie’s brilliance and artistry shine through even the darkest moments.

Starts streaming Friday, Feb. 26 on Apple TV Plus
Speaking of iconic music stars named Billie, last year’s Grammy winner Billie Eilish takes center stage in this documentary from filmmaker R.J. Cutler. The World’s a Little Blurry gives fans a front-row seat to the teen singer’s life as it explodes into a supernova of fame and awards. The doc is as much a coming-of-age story as a concert film; watch Eilish learn to drive, jet around the world on tour and then take home five Grammys, including Album of the Year.

Streaming now on Peacock
Gen X is getting reboots of all their beloved shows. The Punky Brewster sequel series sees the titular character still sporting mismatched sneakers, even though she’s all grown up. Punky is a photographer, just like her late father Henry (RIP George Gaynes), and she’s raising three kids with her ex-husband (Freddie Prinze Jr.). This Punky Brewster reboot is more earnest and less meta than the new Saved By the Bell series, with liberal doses of catchphrases (yes, “Punky Power” is also back). One thing that doesn’t seem to have ported over into the new era is the Very Special Episode. Thank goodness, because we couldn’t handle worrying about Cherie getting locked in an abandoned refrigerator again.  Here’s how to dive right in and watch Punky Brewster on Peacock.

Airing Sunday, Feb. 28, 9 p.m. ET on AMC
Much like the zombies, The Walking Dead seems to just keep going. But the series is not actually unkillable; in fact, it’s ending with season 11. This batch of six “bonus” episodes follows up on the fall finale, which saw the defeat of the Whisperers and the return of Maggie (Lauren Cohan). Of course, when one threat is eradicated, another pops up. There’s no rest for the weary survivors — nor for Walking Dead viewers.

Airing Friday, Feb. 26, 8 p.m. ET on VH1
RuPaul’s Drag Race season 13 takes a break this week to air this behind-the-scenes special, which chronicles how the show was filmed during the COVID-19 pandemic. The doc features interviews with contestants Kandy Muse, Symone, Utica Queen, LaLa Ri and others. “I’ve been tested, my hands are washed, I’ve been quarantined,” Kandy Muse says of the health and safety precautions put into place. Tamisha Iman declares, “I’ve survived corona, I’ve survived cancer, I’m not going to tell you what else I’ve survived, just trust me, I’ve survived some things.” Bow before the queens.

Starts streaming Friday, Feb. 26 HBO Max
The classic cartoon gets yet another reboot in the 15th film starring Hanna-Barbera’s top cat and mouse duo. This one is an animated/live-action hybrid featuring Chloe Grace Moretz as a wedding planner who hires Tom to get rid of Jerry before one of her events. The movie is filled with slapstick humor, the kind of unsubtle comedy that some younger kids like but older ones (and adults) will likely find eye-rolling and crass.

What to watch this weekend: ICYMI

Catch up on these recent releases, which you may have missed:

Nomadland (Hulu)
In this gorgeous and graceful film from director Chloe Zhao, Frances McDormand stars as a woman left with nothing when the local mine shuts down. She moves into her van, works gig jobs at Amazon and campgrounds to earn money and joins a community of fellow itinerants in the American West.

For All Mankind season 2, episode 1 (Apple TV Plus)
Ten years have passed in the space-faring drama. The U.S. has made huge strides in its moon program — its lunar station is a mansion now — but the country is still locked in a cold war with Russia. And the situation gets even more tense as solar

I Care a Lot (Netflix)
This dark comedy/thriller takes glee in the sordid story of a con woman (Rosamund Pike) whose grift is to become the legal guardian of unsuspecting senior citizens. Things get complicated and dangerous when her latest victim turns out to be related to a mobster (Peter Dinklage).