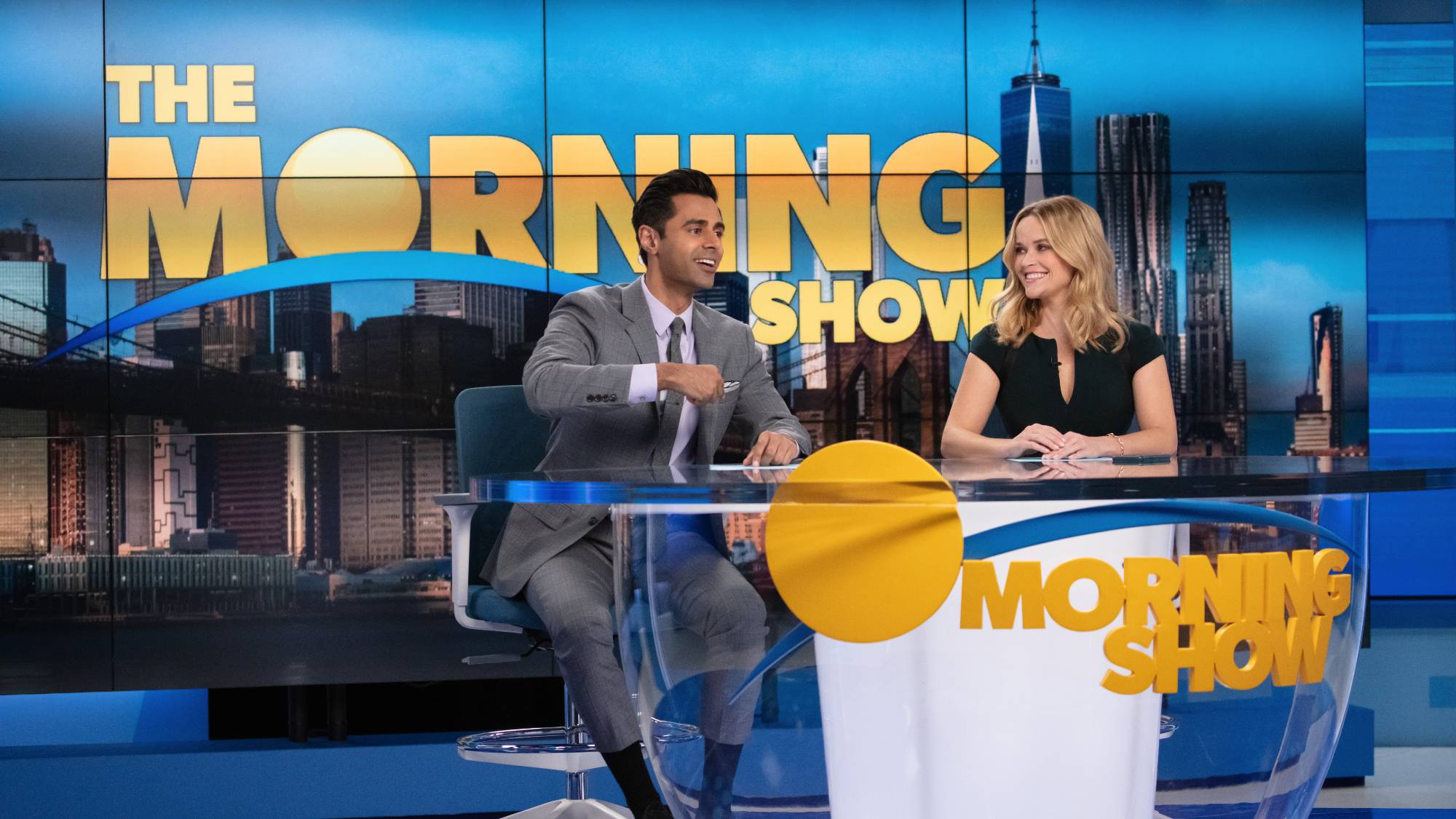 The fall television season is just getting started, but already, a slew of new movies and TV shows are streaming on Netflix, HBO Max, Peacock, Hulu and other services. Things will really amp up next week, after Sunday’s Emmy Awards, when the networks debut their new lineups.

This weekend’s offerings run the gamut. The Morning Show season 2 returns by waking up and choosing chaos, and Sex Education season 3 does much of the same. New school year, new principal, same complicated love lives. The series premiere of Y: The Last Man finally brings the post-apocalyptic comics to the screen, after a long and winding road through development. And Clint Eastwood unveils his newest film, Cry Macho, which might be the most Clint Eastwood-y of them all.

And that’s not all: There are a ton of new TV shows and specials available on broadcast and cable. If you’ve cut the cord, just sign up for one of the best cable TV alternatives for access to your favorite channels.

Here are our picks for the new movies and TV shows to watch this weekend.

The Morning Show (Apple TV Plus)

Season 2 premiere | Episode 1 (TV-MA) | How to watch The Morning Show online
Apple TV Plus launched by plastering the faces of Jennifer Aniston and Reese Witherspoon everywhere. The streamer was essentially saying, “Look, we’ve got the big bucks to get the really big stars.” The show is set in the cutthroat world of morning news; the titular program is a take on The Today Show. The first season was good, if uneven. And thanks to Billy Crudup’s sublime performance as a network executive, Apple TV Plus got its first Emmy right out of the gate. Season 2 picks up in the aftermath of the explosive finale, which saw anchors Alex Levy and Bradley Jackson exposing UBA’s toxic workplace. Alex quit the show, but Cory Ellison wants to bring her back. New faces Hasan Minaj, Julianna Margulies, Holland Taylor and Greta Lee stir up more drama amid the chaos.

Series premiere | Episodes 1-3 (TV-MA) | How to watch Y: The Last Man online
At last, Y: The Last Man has risen from the depths of development hell and emerged into the bright light of streaming. The adaptation of the popular comic books has been in the works at FX since 2015. After some shuffling of showrunners and writers, and a switch to FX on Hulu, it’s finally arrived. Like the comics, the story is set in a post-apocalyptic world where every mammal with a Y chromosome has been mysteriously killed. The only exceptions are a man named Yorick Brown (Ben Schnetzer) and his pet monkey. They, along with the survivors, grapple with their new reality. Leading the charge is Yorick’s mother, U.S. president Jennifer Brown (Diane Lane).

Season 3 premiere | Episodes 1-8 (TV-MA) | Watch now
School is back in session! Teen Otis (Asa Butterfield) is having casual sex, while his mom Jean (Gillian Anderson) deals with her pregnancy. Eric and Adam (Ncuti Gatwa and Connor Swindells) have made their relationship official, while Aimee (Aimee-Lou Wood) discovers feminism. Oh, and that whole Otis/Maeve voicemail situation still needs to be resolved. There’s also a new headteacher at Moordale, Hope (Jemima Kirke), whose new philosophy and style turn the school upside down.

Movie | 1 hr 43 min (PG-13) | Watch now
With that title, this could only be a film by Clint Eastwood. And of course, he plays a grouchy former Texas rodeo star named Mike Milo. After a career-ending injury, he takes up horse training. His boss (Dwight Yoakam) fires him, but gives him another gig: go to Mexico and bring back his 13-year-old son Rafo (Eduardo Minett). There, Mike finds the teen has turned to a life of drinking, gambling and cockfighting. The two, along with Rafo’s prize rooster Macho, go on the run from the cops and menacing bodyguards. Their journey takes a surprising turn and Mike’s mission becomes less about saving Rafo and more about saving himself.

The Premise (FX on Hulu)

Series premiere | Episodes 1-2 (TV-MA) | Watch now
BJ Novak’s new anthology series explores different hot button topics du jour, from online bullying to gun control to social justice. The Premise has shades of Black Mirror, though with less of a focus on technology. The stories are not so much ripped from the headlines as ripped from social media. In one episode, an Instagram influencer (Lola Kirke) ponders the motives of her biggest troll. Another revolves around a white man’s embarrassing sex tape that also captured footage of cops beating a Black man (Jermaine Fowler). Should Ethan (Ben Platt) prove his allyship by releasing the tape or save himself the humiliation?

Series premiere | Episode 1 (TV-14) | How to watch Dan Brown’s The Lost Symbol online
Mystery-solving symbologist Robert Langdon became a popular figure thanks to Dan Brown’s novels The Da Vinci Code and Angels and Demons. Tom Hanks embodied the character in the movie adaptations. For The Lost Symbol series, the clock is turned back to a time when Robert was a young professor (portrayed by Ashley Zukerman). The action kicks off when his mentor, Peter Solomon (Eddie Izzard), is kidnapped. With the help of Peter’s daughter Katherine (Valerie Curry), Robert must solve a series of cryptic puzzles to rescue him.

Movie | 1 hr 35 min (PG-13) | Watch now
The English-language remake of 2017’s Mon Garçon follows the same improvisational technique used in the original. Star James McAvoy didn’t get a script; he learns what’s happening as the movie goes along. He plays a man whose 7-year-old son goes missing from a campsite. He travels to the area to meet with his frantic ex-wife (Claire Foy) and the police. Their suspicion is that the boy has been kidnapped and it may be tied to the father’s work. He is set on a grim path filled with twists and danger as he searches for his child.

Series premiere | Episodes 1-8 (TV-MA) | Watch now
The ever-expanding genre of adult animation adds this slice of deep dish pizza to its menu. The series is based on Chris Witaske’s satirical Twitter account and chronicles the disorganized life of Diane (Lauren Ash), a hot mess of a hairdresser. Her husband has just moved out, and her salon has been acquired by a hipster corporation headed by boss Gideon (RuPaul). On top of all that, she gets a new roommate when her nerdy nephew Daniel (Rory O’Malley) decides to take a gap year in Chicago before heading off to Stanford.

Special | Airs Sunday, Sept. 19 at 8 p.m. ET | Watch via Paramount Plus
For all of Netflix’s dominance in getting Emmy nominations, the streamer still hasn’t nabbed one of the top prizes, best drama or best comedy. It still won’t win the latter this year, since Ted Lasso has that pretty well in the bag. But Netflix is expected to take the crown jewel of the Emmys thanks to The Crown. The royal drama should also clean up in the acting categories, too, with trophies for Josh O’Connor (Prince Charles), Emma Corrin (Princess Diana) and Gillian Anderson (Margaret Thatcher). Aside from Ted Lasso, the comedy honors are more up in the air. HBO Max should be happy, though, since either Kaley Cuoco (The Flight Attendant) or Jean Smart (Hacks) will probably go home as best actress. And it’s likely the late Michael K. Williams will finally earn his first Emmy, posthumously, for Lovecraft Country.