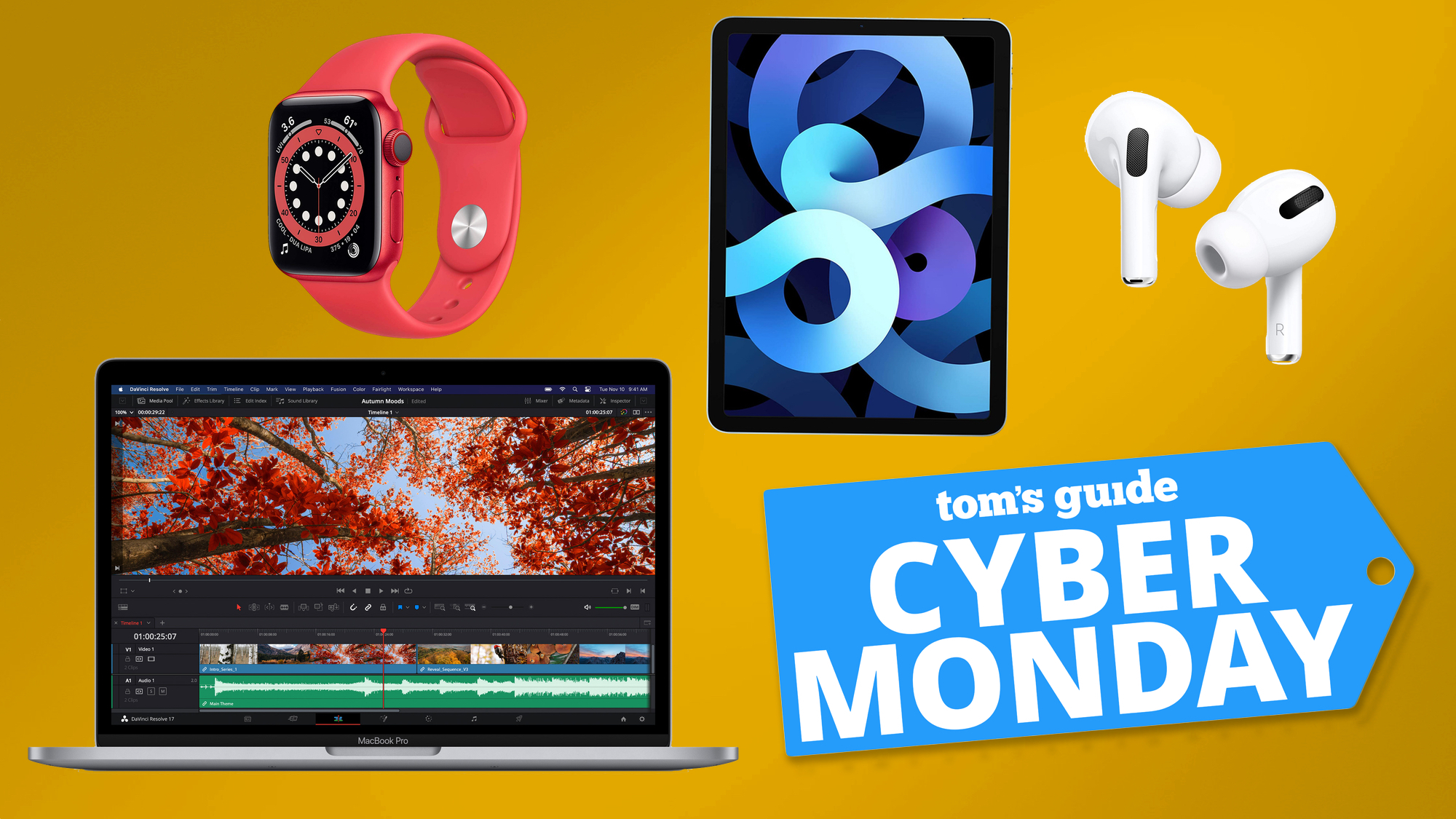 Apple Cyber Monday deals are here, and that means discounts on normally premium-priced devices. Whether you’re searching for a MacBook Pro or a pair of AirPods, Apple products are often some of the most popular Cyber Monday deals out there, and we’ve been keeping an eye out for the early deals that have already started.

These Apple Cyber Monday deals run across all the major retailers, and not just Apple itself. You’ll often find the best savings at sites like Walmart and Best Buy, as you won’t see discounted prices on products in Apple’s Cyber Monday sale. Instead, the Apple Store is offering gifts cards to redeem against future purchases and not all of the items eligible are current-gen devices. That sale started on Black Friday (Nov. 26) and lasts until Monday (Nov. 29).

AirPods 3rd gen: was $179 now $169 @ Amazon
The new AirPods 3 look similar to the AirPods Pro and offer Spatial Audio, which creates immersive listening experiences for music-listening, movie-watching, and more. They’re also IPX4 sweat and water resistant, a feature that was previously exclusive to the AirPods Pro.

Apple AirPods Pro: was $249 now $169 @ Amazon
The Apple AirPods Pro had dropped to $159 at both Amazon and Walmart, but that price is now gone. At least there’s still a discount for Amazon shoppers, while the AirPods Pro are no longer in stock at Walmart as of this writing.

AirPods: was $159 now $119 @ Amazon
Amazon has the second generation Apple AirPods with standard charging case on sale for $119. That’s $40 off, though it doesn’t match the best price of $114. These AirPods feature Apple’s H1 chip for fast wireless connectivity with Apple devices.

AirPods w/ Wireless Case: was $199 now $149 @ Best Buy
For a limited time, you can get the AirPods with Wireless Charging Case for just $149 at Best Buy. They come with a Qi-compatible case that allows for wire-free charging.

Apple Watch 7: buy two, get $330 off @ AT&T
AT&T is offering a BOGO deal on its Apple Watch 7 preorders. Purchase any two Apple Watch 7 devices at AT&T and you’ll get $330 off your total purchase. The new watch comes in 41mm and 45mm sizes. It features a larger/brighter display, better durability (IPX6 certification), and up to 33% faster charging.

Apple Watch 7: was $399 now $389 @ Amazon
If you’re looking for the newest Apple Watch, it’s also been discounted right now on Amazon. You can save on the 41mm Apple Watch 7 with GPS right now, and the deal is across the white, red, and green colorways. Price drops fluctuate between $10 and $20.

Apple Watch Series 5 (GPS + Cellular, 40mm): was $749 now $459 @ Amazon
This Apple Watch is now two generations old, but it was the first with an always-on display, one of the best features about the Apple Watch. It also has an ECG app and fall detection, and this model has the attractive steel Milanese loop.

Apple Watch 5 (44mm/Cellular): was $749 now $459 @ Amazon
Save $290 right now on the Apple Watch 5 with GPS and Cellular. Despite being a couple of years old, the Series 5 remains one of the best Apple Watches around. It has an always-on display, GPS, a heart rate monitor, and more. Grab it while you can.

Apple TV 4K: buy one, get a $50 gift card @ Apple
Probably the best streaming box for Apple fans, thanks to solid integration with iOS, MacOS, HomeKit, and your iTunes library. Prices start at $179 for the 32GB model, and once your purchase is complete you’ll get a $50 gift card to spend on some other Apple purchase.

MacBook Air (M1): was $999 now $899 @ Amazon
Larger discounts can be found below, but this is the sale that you should check out first. The latest MacBook Air mixes long endurance and high performance thanks to the M1 chip, and it’s a favorite at Tom’s Guide.

MacBook Pro M1: was $1,299 now $1,199 @ B&H Photo
The new MacBook Pro M1 is powered by Apple’s new M1 chip. That means it’s a lot faster and delivers longer battery life than previous MacBook Airs. And now you can save $100 one of the best laptops you can buy. B&H is running this sale through Nov. 30.

MacBook Air (Intel): was $999 now $829 @ B&H
This  discounted MacBook Air gives you Apple’s awesome ultraportable for $829. While not the discount we saw earlier, you’ll still save $170.This configuration features an Intel Core i3 processor, 8GB of RAM and 256GB of storage. Act fast on this limited time deal!

MacBook Pro M1 13-inch: was $1,299 now $1,199 @ Amazon
The MacBook Pro M1 delivers stunning performance via Apple’s silicon and more than 16 hours of battery life. Add in a sharp and bright Retina display and a comfy keyboard and you have a great Cyber Monday deal that will go fast.

MacBook Pro (M1/512GB): was $1,499 now $1,349 @ Amazon
Apple’s 13-inch MacBook Pro with M1 chip delivers a huge performance boost over previous models (and rival Windows laptops) plus a battery that lasted for more than 16 hours in our tests. This 512GB model also gives you plenty of storage space.

10.2″ iPad (64GB/2021): currently $329 @ Amazon
We hate to say it, but deals on the base iPad are going to be near-impossible to find. Just finding it in stock is hard enough. If you’re lucky and see it drop to $299, buy it immediately. Although prices hit $249 last year, we doubt we’ll see those prices again in 20201. As a reminder, the new 2021 iPad features Apple’s A13 Bionic CPU, a new 12MP front camera, and 64GB of storage (instead of 32GB like its predecessor). You also get support for Center Stage, which uses machine learning to adjust the front-facing camera during FaceTime video calls. Walmart offers the same iPad for $459.

Apple Pencil (2nd gen): was $129 now $99 @ Amazon
The perfect accessory for the new iPad Pro models, the 2nd-generation Apple Pencil helps you draw, sketch, take notes and more on your tablet. Support for double-tapping lets you easily change tools without setting it down, while the flat edge attaches magnetically for charging and pairing.

Apple Smart Folio: was $79 now $74 @ Amazon
The Apple Smart Folio (for 10.9-inch iPad Air/4th Gen) protects the front and back of your iPad Air. It also automatically wakes your iPad when opened and puts it to sleep when closed.

iPhone 13 Pro: free w/ trade-in + unlimited @ AT&T
AT&T is offering some of the best Apple Black Friday deals on the new iPhone 13. New and existing customers can get the iPhone 13 Pro for free with an eligible trade-in. You’ll need to purchase your phone via a monthly installment plan and you’ll also need to sign up for an unlimited data plan.

iPhone 13: up to $700 off w/trade-in @ Apple
If you’d rather have an unlocked iPhone 13, you can still save a significant amount by buying directly from Apple. trading in your old device means you can get up to $700 off the cost of a new iPhone 13, meaning you can get one for as little as $129.

iPhone 12: Buy one, get $699 off a second@ Verizon
Verizon will give you $699 back in bill credits on a second iPhone 12 when you buy the first model. You’ll need to sign up for an unlimited plan. New customers who switch will get an extra $800 credit via a prepaid Mastercard.