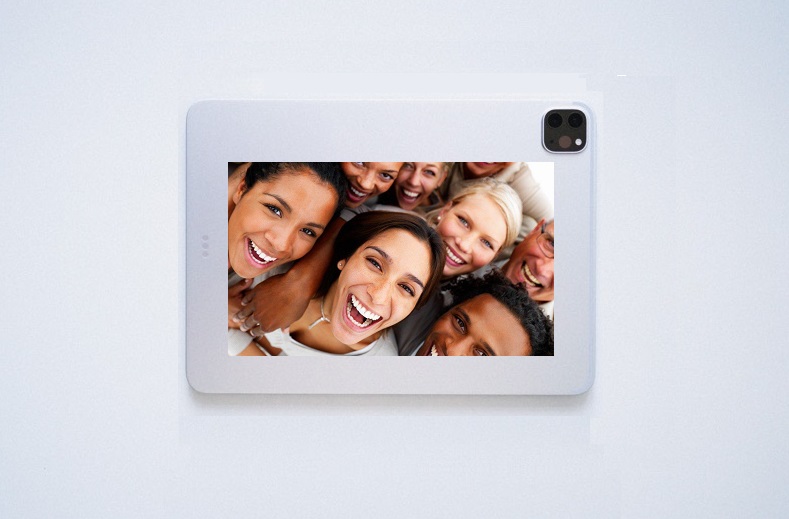 Apple could be shaking up the iPhone and iPad designs in a big way.

Among the Apple patents published this week by the US Patent and Trademark Office (USPTO) is one that could see Apple install a second display on the back of devices “configured to show text, colors, line drawings, photographs, animations, video and the like.”

Why would this be important? As spotted by Patently Apple, the main purpose seems to be to improve photography of people, as the rear display could provide “stimulus features” to make subjects respond with a laugh or smile just as the shutter closes.

Below, Patently Apple imagines an example where an iPad shows a subject an Animoji panda as their photo is taken — a handy way of grabbing a child’s limited attention at the key moment.

While the report mentions that the second screen could feature Apple staples like multi-touch, its main appeal could be something far simpler: selfie quality. The front-facing cameras on phones tend to be inferior to the rear shooters. With a screen on the back, iPhone and iPad users could massively improve the quality of their selfies while still being able to see themselves.

This could be taken a step further: if the rear camera is suddenly good for selfies, then the front-facing camera could be removed altogether, ditching the need for a notch and opening up the door to a true full-screen display. That’s likely a step too far, though. Apple’s Face ID relies on the clever series of sensors in the front of the screen, so it’s unlikely that the TrueDepth camera is going away anytime soon.

Plenty of patents never see the light of day, and if they do, they don’t necessarily arrive in the form originally imagined. But we could see something like this for the eventual iPhone Flip or iPhone 14.