FEBRUARY 28 — Recently, we’ve published a comparison of penalties imposed by fibre broadband players for customers that cancel before their contract expires. What we noticed is that some had changed their T&C which requires customers to pay the full subscription amount for the remaining months of their contract.

As mentioned in the earlier post, it is unfair to make customers pay in full for something that they no longer use. We’ve reached out to the Malaysian Communications and Multimedia Commission (MCMC) and here’s their official response on the matter.

When we asked the MCMC if there are any regulations in place which caps the penalty charge to a fixed amount to protect consumers, they told us that there’s a General Consumer Code of Practice (GCC) in place to provide guidelines for self-regulation.

The commission points to Part 2 Provision of Information under Terms & Termination, it is a Service Providers’ duty to inform a consumer on pertinent details detailing a contract including its minimum contract term (if applicable),
minimum period & the manner of notification of termination and amount or method of calculating any charges payable for early termination.

The MCMC said “Thus, it is important for consumers to read the legal contract as every word is part of the legal agreement. When SP does not provide that information, then it may possibly be breach of GCC and will be subject to regulatory action.”

The answer is also the same when we asked the MCMC if providers are allowed to demand back hardware (such as the fibre broadband BTU) even after they have fulfilled their minimum contract period. In their official reply, they told us that consumers would need to read the Terms & Conditions before subscribing.

The MCMC said “Consumers have a responsibility to reach a service contract as that is based on a willing buyer willing seller principle. Consumers opt to subscribe to a service and not forced into one. It is not the BTU that is to be returned but the modem router usually. Therefore, for such moveable item, it will be defined in the contract.”

Consumers are responsible for accepting the T&C

Based on the response, it appears that telcos can charge any amount for penalties as long as customers are agreeable to the terms. When we posted our comparison, both TM and Maxis would require its new customers to pay its remaining subscription fees in full. For example, if your subscription fee is RM199/month and you have 10 months remaining, the penalty charge would be RM1,990, which is ridiculously high. 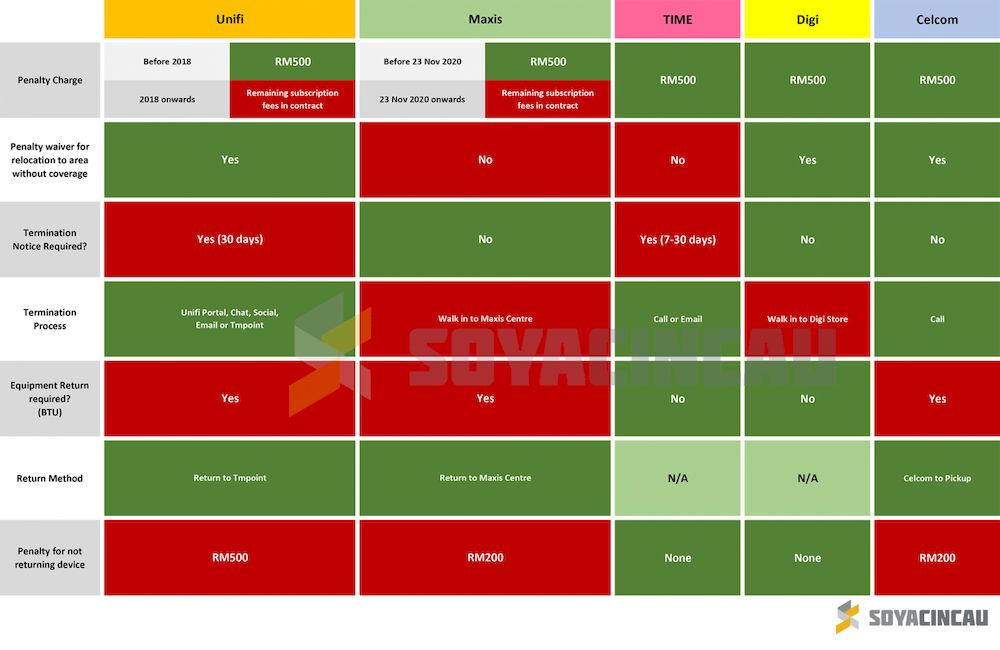 Previously, both providers charge a one-off RM500 penalty for early termination, which is what other fibre broadband players are currently charging. RM500 is a fair amount for telcos to recoup their initial cost for installation and for providing the hardware.

However, it is also worth mentioning that TM can waive the penalty if you’re relocating to a different address that is out of coverage. Unfortunately, this waiver isn’t available for Maxis fibre broadband customers.

In conclusion, it appears that customers would have to fend for themselves when it comes to such unfair contracts. Before signing the contract, always ask questions especially when it comes to early termination, fair usage policy, speed cap and monthly data limits. You can ask the sales representative to point out the terms so that it is absolutely clear of what you’re getting yourself into. Always keep a copy just in case if there are any sudden changes without prior notice.

As mentioned by the MCMC, it may possibly be a breach of the General Consumer Code if the service provider fails to provide these crucial information and action can be taken. However, once you’ve signed the subscription contract, there’s nothing much you can do. — Soyacincau