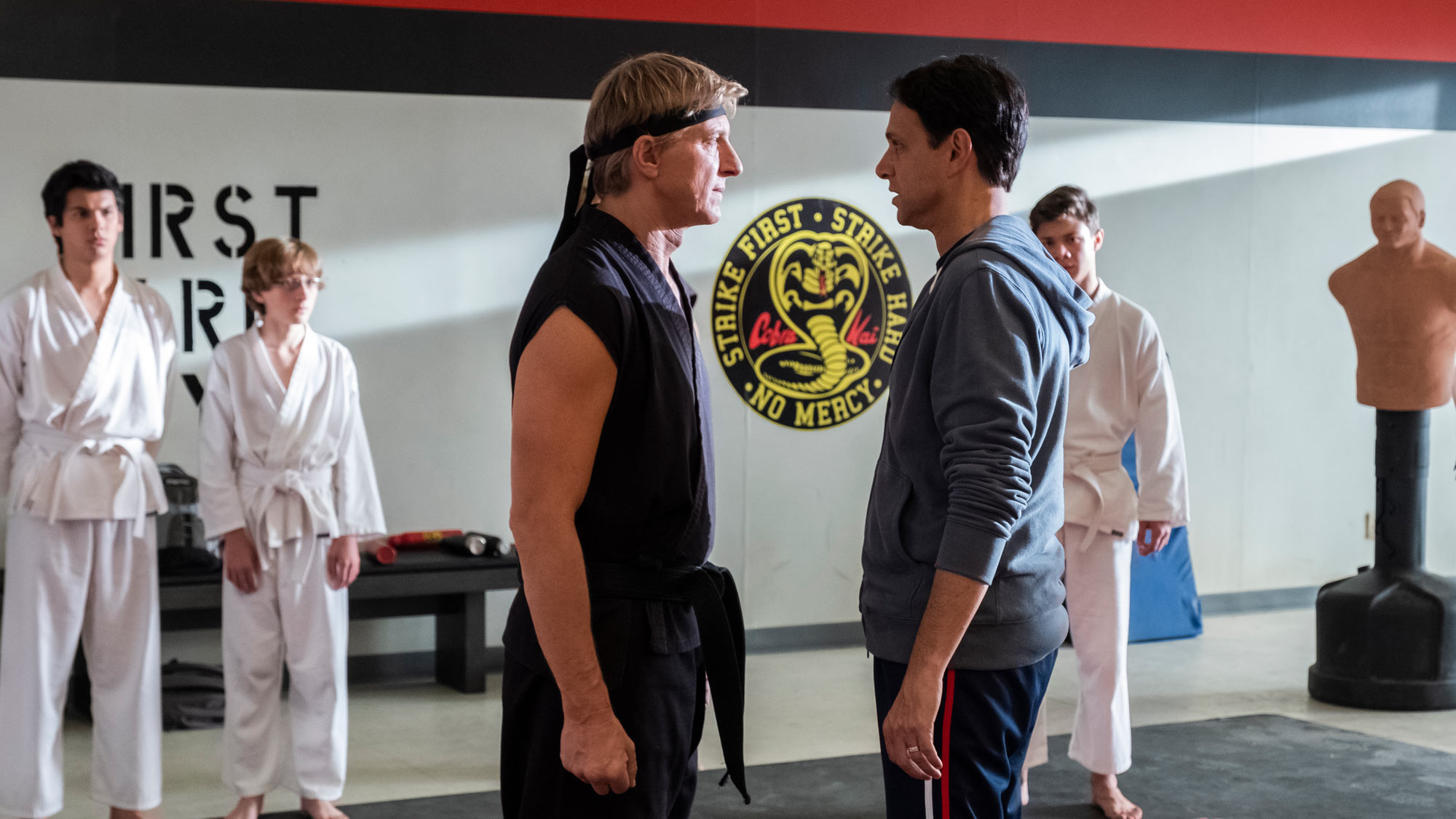 Cobra Kai has already been a hit for Netflix, maintaining a place in the service’s Top 10 list. The series first premiered on YouTube Red in 2018, but moved to Netflix in August 2020. That includes the first two seasons as well as the upcoming third installment.

Spoiler alert: The following story has spoilers for Cobra Kai seasons 1 and 2.

Now, they’re older, though not necessarily wiser. Daniel is a successful car dealership owner, while Johnny is down and out. But after Johnny helps a teen named Miguel (Xolo Maridueña) fend off some bullies, he finds himself reopening his old dojo and teaching a misfit group of pupils his style of karate. That doesn’t sit well with Daniel, who vows to shut it down. Things get more complicated when Daniel’s daughter Samantha (Mary Mouser) starts dating Miguel, and when Daniel starts mentoring Johnny’s son, Robby (Tanner Buchanan), in karate.

Season 2 leaves off on a huge cliffhanger, with one of the characters suffering a possibly life-ending injury. More on that below.

Here’s everything you need to know about Cobra Kai season 3.

Cobra Kai season 3 will be released on Netflix sometime in 2021.

Show co-creator Jon Hurwitz teased the news on Twitter, saying the season has already been filmed and edited. “Ready to go,” he noted.

That means season 3 might debut as early as January or February.

That’s a relief to antsy fans, since so many film and television productions have been delayed due to the coronavirus pandemic. But Cobra Kai season 3 was able to complete filming before the end of 2019.

Co-creator Josh Heald told CBR, “Thankfully with season 3, we wrapped production before the end of 2019 … We were still doing some finishing touches for the effects and some quality checks on season 3 while the quarantine aspect of the pandemic was just beginning but we finished our final mix – the last big piece of post-production — that was done in-person with raising champagne and eating cupcakes and all the things you do to feel like you’re at your absolute unhealthiest coming out of the completion of a season.”

So far, Netflix has released just one teaser trailer for Cobra Kai season 3. Mostly, the video features clips from the first two seasons. But there is one tantalizing sneak peek at Daniel traveling to Okinawa, the home of Mr. Miyagi!

Cobra Kai season 3 is bringing back most of its main cast, headlined by William Zabka as Johnny and Ralph Macchio as Daniel LaRusso.

Also returning is Xolo Maridueña as Miguel Diaz. The end of season 2 left Miguel’s fate in the balance, but the actor confirmed on Twitter that he completed filming on the new season.

Other karate kids who will likely continue kicking around are Jacob Bertrand as Eli “Hawk” Moskowitz, Gianni Decenzo as Demetri, Nichole Brown as Aisha Robinson and Peyton List as Tory Nichols.

As far as familiar faces from the movies, Martin Kove will be back as John Kreese, Johnny’s old mentor. And rumor has it that Elisabeth Shue will reprise her role as Ali, the love interest who sparked the rivalry between Daniel and Johnny back in the day.

When Cobra Kai season 3 is released, it’ll have some major cliffhangers to resolve.

First is the health and status of Miguel, who was badly injured after a fight broke out at school. He and Robby got into it, but so did other members of the Cobra Kai crew. Samantha also received some scrapes, leading her mother to give Daniel an ultimatum to shut down Miyagi-do.

The fight also results in Johnny losing control over Cobra Kai, with most of his students pledging to follow Kreese (who secretly took over the space while Johnny was on his trip to San Bernardino). Despondent and guilt-ridden, Johnny throws his cell phone away at the beach — missing a Facebook friend request from his old high school flame, Ali.

When season 3 premieres, there may be a time jump. Zabka told Collider, “[Johnny] wasn’t doing too well at the end of Season 2, and you know, it picks up a little bit later in time after Season 2, Season 3 does, so you’re going to meet the result of what those events would do to someone like Johnny Lawrence.”

Since we know that Maridueña filmed season 3, Miguel obviously survives his injuries. Whether he’s recovered enough to return to karate training is the question.

As for Ali’s friend request, it prompted speculation that Elisabeth Shue would be the next original movie cast member to reprise her role in the series. But there’s no confirmation yet that she’ll appear.

Netflix’s season 3 teaser shows that Daniel goes to Okinawa, which he last visited in The Karate Kid II. So, we may see him reencounter Chozen (Yuji Okumoto) and Kumiko (Tamlyn Tomita).