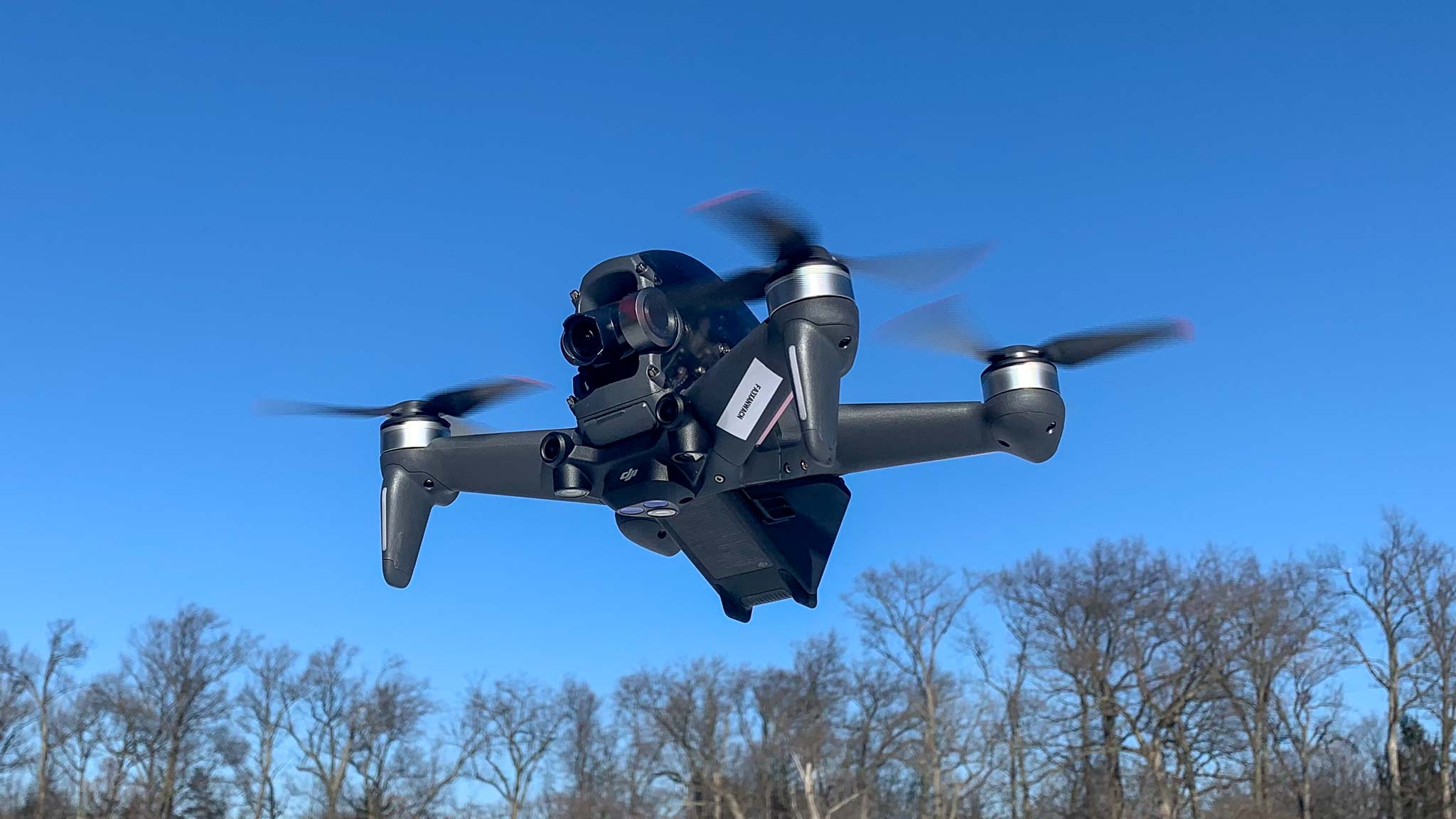 As I skimmed the DJI FPV drone inches above the snowy ground, I couldn’t help but feel like Luke Skywalker sitting in the cockpit of his snow speeder, rocketing towards the AT-ATs during the Battle of Hoth.

That’s because I was wearing a set of FPV goggles that come with the drone, which gave me an immersive, first-person view of what the DJI FPV was capturing with its camera.

Most consumer drones let you beam video from their camera to an app on your phone or tablet, so you can see what they’re seeing. Far less common, though, are drone kits with FPV, or First-Person View goggles. Most kits you can find are pieced together, with the drone made by one company, the controller by another, and the goggles by a third.

The DJI FPV drone bundle brings everything under one roof, to provide an easy entree into the world of FPV drone racing. Along with an excellent pair of goggles and flight controls that can adapt as your flight skills improve. This DJI FPV drone review will show you what it’s like to take to the skies.

The DJI FPV is available March 2, starting at $1,299 for the DJI FPV Combo, which includes the FPV drone, remote controller, FPV Goggles V2, all required cables and one battery. The FPV Fly More Kit, which includes two additional batteries and a charging hub, costs $299. The optional Motion Controller is sold separately for $199.

The DJI FPV drone kit consists of three parts: The drone, a two-handed controller, and the FPV goggles.

DJI FPV Controller
The controller that comes with the FPV drone is similar to DJI’s other controllers in shape and function, but has a few key differences. For starters, there are a few more shoulder buttons, and there’s no cradle for a smartphone, as there’s no need: You view and control everything through the goggles.

The right side of the controller has one button for taking photos and another for recording video, as well as a smaller toggle switch that  lets you change flight modes (normal, sport, and manual). On the left is a single shoulder clicker that acts as an emergency stop and a return-to-home button. Next to it is a toggle that angles the camera to pre-set positions, and below it is a scroll wheel that lets you rotate the camera vertically.

The controls are large and easy to use, but if you’re new to using FPV goggles, it’ll take a few tries to remember what each button does by feel alone. I had to lift up the goggles and peek down at the controller a couple of times during my first few flights.

DJI FPV Motion Controller
DJI is also selling separately a one-handed Motion Controller ($199) that looks like a joystick, and lets you fly the drone by moving your hand around in the air. In some ways, it’s similar to the Fluidity FT Aviator controller, but in a much more compact package. The Motion Controller did not arrive in time for me to test it, but we will update this review once we’ve had a chance to fly the drone some more.

When you put them on, the FPV goggles make you look like a cross between Buffalo Bill in Silence of the Lambs and the dude from Hellraiser. The gray and black goggles are very angular, and have four screw-in antennas, one on each corner. On the upper right side is a Record button, a Back button, and a small directional stick. As with the controller, it took a bit of practice to remember where the buttons were and what they did, but I got the hang of things after a few flights. On the other side of the goggles are two other buttons, a microSD card slot, and a USB-C port.

The FPV goggles don’t have their own internal battery, so  to use them, you have to connect a small battery via a proprietary USB-C adapter. While it shaves some weight off the goggles, this approach makes things a little awkward. Fortunately, the power cord is long enough so that you can stuff the battery in a jacket pocket. It would be smart if there were a holder on the goggles’ strap, though.

The goggles were comfortable to wear, though they didn’t form a great seal around the sides of my head. As a result, light seeped in, though it wasn’t overly distracting during flights.

The image produced by the FPV goggles was incredibly immersive, taking up nearly all my field of view. Small dials on the bottom of the goggles let you fine-tune their focus. In low-latency mode, they can stream video at 810p/120fps with about a 28ms lag time. In High-Quality Mode, the resolution stays the same, but the frame rate drops to 60fps, and the lag increases to 40ms. I didn’t let the drone stray too far from me — its furthest distance was about a quarter-mile — but never experienced any lags, pauses, or dropouts in the video streaming to the goggles.

I’m here to tell you: this drone is FAST.

DJI’s FPV drone has three flight modes: Normal, Sport, and Manual. Normal mode is closest to other DJI Mavic drones, and lets you zip along at a max speed of about 31 miles per hour.

Sport mode is the next step up, increasing the maximum speed to 60 miles per hour. This mode also mixes in a few more manual elements while still maintaining stabilized flight and limited turn angles.

Finally, Manual mode is the most like drone racing. In this mode, the FPV drone can reach speeds of 87 miles per hour, and you get full control over everything the drone can do. In some ways, it’s comparable to turning off antilock brakes and traction control in a sports car.

Even at 50-60 mph, the FPV felt wickedly fast. It sped across a 600-foot field in mere seconds; I had to slam on the brakes more than once to keep it from crashing into a tree.

However, if you find things getting out of hand, you can press the Emergency Brake and Hover button on the controller that will bring the drone to a stop and make it hover in place.

The FPV drone has two sensors on the bottom, as well as two forward-facing sensors. In Normal mode, the front sensors will slow the drone down if they detect an object; in the Sport and Manual modes, these sensors are turned off.

A word of caution to anyone who gets motion sick (like me): If you make a lot of sudden movements, you’re going to feel a little nauseous.

The view from the FPV drone’s camera to the goggles was so immersive that I nearly threw up. (I get car sick kind of easily. You couldn’t drag me onto a roller coaster). Because the FPV drone is so nimble, it’s easy to make fast, sharp movements in different directions, which, for those who have inner ear issues, will induce nausea within minutes.

However, when I flew the FPV drone in broad, sweeping curves high above the ground, that queasiness turned into elation as it felt like I was soaring like a bird.

While the DJI FPV shouldn’t be your first choice if you’re looking for a drone to shoot video — it only has a two-axis gimbal, and the drone’s rotors appear in the frame — it still delivers some impressive footage.

The DJI FPV has a 1/2.3-inch sensor, the same size as found in the majority of DJI’s Mavic drones, and can shoot 4K video at 50/60 fps, but lacks some of the video features found in those drones. For instance, there’s no object tracking, nor are there modes for the drone to lock on to a particular subject and fly in a pattern around it.

Unlike its other models on our best drones page, the DJI FPV isn’t intended as a camera drone. Rather it’s aimed at those who want to get a taste of drone racing. That’s why the DJI FPV comes with not only the drone and a controller, but a pair of first-person goggles that puts you in the pilot’s seat. And, to help novices, it has three flight modes, from Normal to Oh My Gosh That’s Fast.

But more than the drone’s speed, the feeling you get when you don the goggles and take to the skies is unlike anything else; that’s reason enough to pick up the DJI FPV.