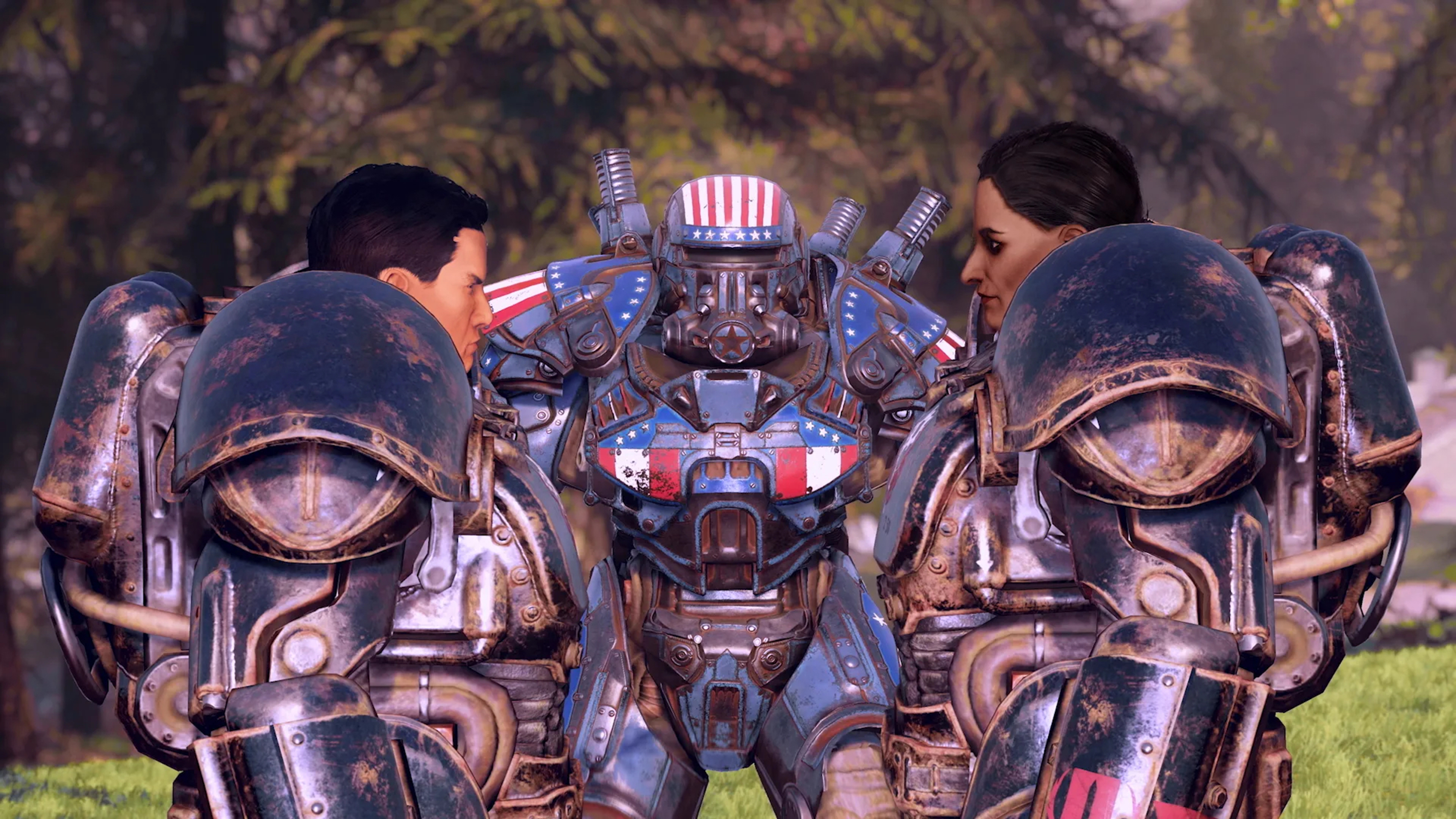 Fallout 76: Steel Reign isn’t much to shout about by itself, but it offers a good overview of just how far the game has come since its disastrous launch.

Fallout 76: Steel Reign is the latest free update to Bethesda’s opinion-splitting online action/RPG. Although Steel Reign tries its best to right some of the game’s initial wrongs, it’s unlikely to satisfy Fallout 76’s many critics.

It’s something of an understatement to say that Fallout 76 didn’t have the best launch. The fact that it arrived bearing more bugs than a flophouse mattress was almost to be expected for such an ambitious online project. After all, even the widely venerated Fallout 3 had plenty of those.

But a bigger problem was that Fallout 76 lacked so many of the features that series fans had come to expect, notably human NPCs with whom to interact. This was the Wasteland we knew and loved, but it was one strangely devoid of character. It was roundly, and rightly, panned by critics.

A series of free updates since then have gone a long way to fixing those flaws. Last year’s massive Wastlanders brought back human NPCs; One Wasteland for All improved the combat; and Steel Dawn introduced a Brotherhood of Steel questline. With the Locked & Loaded update earlier this year overhauling both the crucial S.P.E.C.I.A.L. loadouts system and the camp crafting mechanics, it’s fair to say that Fallout 76 is now a very different beast from the sickly creature it once was.

Steel Reign is mainly a story-based expansion, in that it concludes the Brotherhood of Steel questline from the earlier Steel Dawn update. There are five quests, a couple of which are pretty lengthy. Depending on how you play the game, you’ll probably get around five hours of entertainment from it. Unfortunately, I am categorically unable to enter a room without searching every drawer and trash can, so it probably took me double that.

The other side of Steel Reign is the new Legendary Crafting feature. This enables you to — you guessed it — craft legendary weapons at your own Camp, rather than having to buy them from other players or the Purveyor Murmrgh vendor, or earn them through quests. You can also now craft Legendary Power Armor, if strutting around the Wasteland in a big metal suit appeals to you.

Steel Dawn concluded with the Brotherhood of Steel’s two leaders, Paladin Leila Rahmani and Knight Daniel Shin, at each other’s throats. Shin is a thinly drawn soldier who sees violence as the answer to almost everything, whereas Rahmani is a more complex and interesting character. She’s more a politician than a military type — though she’s also handy with a laser rifle. In Steel Reign, you’re finally forced to choose between them, with potentially lasting effects.

Before you reach that stage, though, there’s (yet another) super mutant problem to deal with. One quest teams you up with Shin, one with Rahmani and a third with Scribe Odessa Valdez, another Brotherhood character who could use a little more fleshing out. Fallout 76 tries hard to give its NPCs a backstory, but it’s not yet at Fallout: New Vegas levels of storytelling.

Other factions also come into play, including a new raider gang called the Hellcat Mercenaries. Beyond having some fetching power armor, these mercenaries seem pretty much the same as all the other raiders. And then there are some scientists, who — shock, horror! — attempt to play god with unfortunate consequences.

It’s all rather clichéd and I frequently found myself clicking through the dialogue to get to the action. Ultimately, you’re unlikely to care too much about what happens to anyone here.

As I mentioned, Steel Reign attempts to give things a little more weight by making you pick sides. This is something the game has done before, with Wastelanders forcing you to choose between the Settlers and Raiders. It’s an approach that Fallout: New Vegas mastered, with the Legion, NCR and Mr. House all offering distinct endings; I agonized over that one for days. Here, it took me about 20 seconds. Without hundreds of hours of gameplay and characterization behind it, my decision didn’t seem too important, and that’s a real shame.

One of Fallout 76’s biggest failings remains the unimaginative nature of its storyline quests. Even with all of the various factions and characters, many missions still end up as glorified fetch quests, which send you halfway across the sprawling map to kill some baddies and collect a Holotape or two.

That said, a couple of the quests here are a little more varied. One of them takes you through a spooky train tunnel, reminiscent of Fallout 3, and into an underground facility clogged with vines and ghouls. Another sees you explore an abandoned vault. Yes, it’s just another vault among many, but at least it’s a new one.

None of it is particularly difficult, though. The One Wasteland for All update last year changed the levelling system so that you now meet NPCs who are at roughly your same level, wherever you are. But most veteran Fallout 76 players will now be up past level 100, and by that time, you’re pretty much invincible anyway. I’m at level 89 — I should be higher, but I spend too much time crafting — and clad in power armor, with various effects active, I die about once every few months. There’s little peril here, no sense that you need to take this carefully or you could pay a lasting price.

Even so, Fallout 76 is a genuinely good game now. It’s just that much of its appeal lies outside of the storylines.

Crafting, for instance, is great. The ability to create multiple Camps and kit them out as you see fit (within the confines of the still occasionally clunky building system) has led to some remarkable creativity within this corner of virtual West Virginia.

Visiting other players’ Camps is itself a fascinating and enjoyable way to spend time, not least because the Fallout 76 community is, on PlayStation at least, one of the best I’ve ever encountered. It’s rare to find any truly obnoxious individuals. More often than not, you’ll either team up to take down a Scorchbeast, or just wave and move on. But it’s also common to see higher-level players helping out newcomers just for the sake of it, leaving gifts of ammo and health packs in designated locations purely to be nice.

The new Legendary Crafting System is a good step in the right direction, too, though there’s still a little too much grind involved. Previously, legendaries were a random, scattershot thing; now, they’re a random, scattershot thing that you can craft at home. To make a weapon legendary, you need two things: legendary modules and legendary cores. You can buy the former and earn the latter in public events and daily ops.

That’s fine, because events and ops are generally fun to complete. But the frustration comes from the fact that there’s still an element of chance involved in whether you get the legendary effect you wanted. Miss out, and you have the option to re-roll — but that requires more cores, which means more grinding.

Outside of all this, though, Fallout 76 works because it provides an interesting world to explore. It’s a truly vast setting, with huge amounts of variety in the terrain, and a multitude of creatures to discover (and eat). It’s immensely enjoyable to simply wander around, visiting camps, doing the odd event, stumbling upon new locations and going with the flow.

On PS4, Fallout 76 looks and sounds much as you’d expect, given that it comes from Bethesda’s 10-year-old Creation Engine. Sometimes, it’s breathtaking, with the lush forests and jagged peaks of Appalachia forming a stunning backdrop to your daily meanderings.

It’s impressively varied, too. Whether squelching through the misty Mire region or picking your way across the desolate Toxic Valley, you get a real sense of place. The engine is not so hot on human faces though, which is a bit of a problem, given how much of Steel Reign you spend talking to people.

It’s also worth noting that the game is still subject to bugs, even so long after launch. Super mutants and other creatures are regularly embedded half-in, half-out of scenery, and a killing blow will often send your unfortunate victim flying across the room, as if they’ve been hit by a truck rather than a pistol shot.

As a standalone update, Fallout 76: Steel Reign is just fine. It adds a couple of enjoyable quests to while away the time, and slightly improves on an existing crafting system. If it wasn’t free to existing players, I’d be more critical. But as it is, it’s just about good enough to pass muster.

By building on a series of far bigger previous updates, Steel Reign helps take Fallout 76 closer to where it should have been right at the start: a truly essential online Fallout game. It’s not quite there yet, but it’s getting closer all the time.