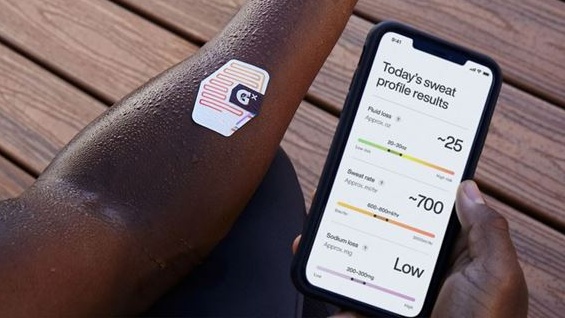 Ah, Gatorade — the electrolyte-laden elixir endorsed by athletes. The toxic-waste colored sap we traditionally dump over the heads of our champion coaches. And, now, less traditionally, the brand that’s asking to test your sweat.

It’s not quite as gross as it sounds. While we’ve been tossing back lightning bolt logo-ed cups of the popular performance beverage, the Gatorade Sports Science Institute has been researching innovations to help people understand their bodies better. It developed the $24.99 Gx Sweat Patch, a new kind of wearable that analyzes athlete’s sweat profiles to inform hydration strategies.

The one-time wear patches use a “lab-based sweat testing protocol” that determine how well someone is hydrated, according to Gatorade’s official announcement. The patches are scanned and analyzed by the companion Gx app (iOS only), which syncs with health services like Garmin Connect on the best Garmin watches and Apple Health for the iOS/watchOS ecosystem.

So along with your workout data, sleep tracking metrics and other vitals, you can see what your sweat says about you — specifically, about how you should hydrate before and after exercise.

While I imagine most people wouldn’t want their sweat tested unless they’re getting paid, I could see this kind of at-home testing being useful for serious athletes. I haven’t considered myself one of those since high school, but even as an avid exerciser I guess I would be interested to my ideal hydration levels for working out and recovery.

If I were to use the Gatorade Gx Sweat Patch, I’d tack it to my left inner arm during a single workout. As I sweat, the patch would fill up. Once I’m done, I would scan the patch with the Gx App to see my sweat profile.

While knowing how to hydrate seems helpful, I’m less interested in a “sweat profile,” per se — I’m really OK not knowing about the salty particles my body oozes on my exercise bike. Plus I’m kind of grossed out by ripping a sweaty Band-Aid off my forearm. Would you feel the same?

You can get a two-pack of the Gatorade Gx Sweat Patch for $24.99 online and in-stores. It sounds a tad pricey for a single use product, so you’re probably not expected to test your sweat daily. Not that any normal person should want to, anyway.