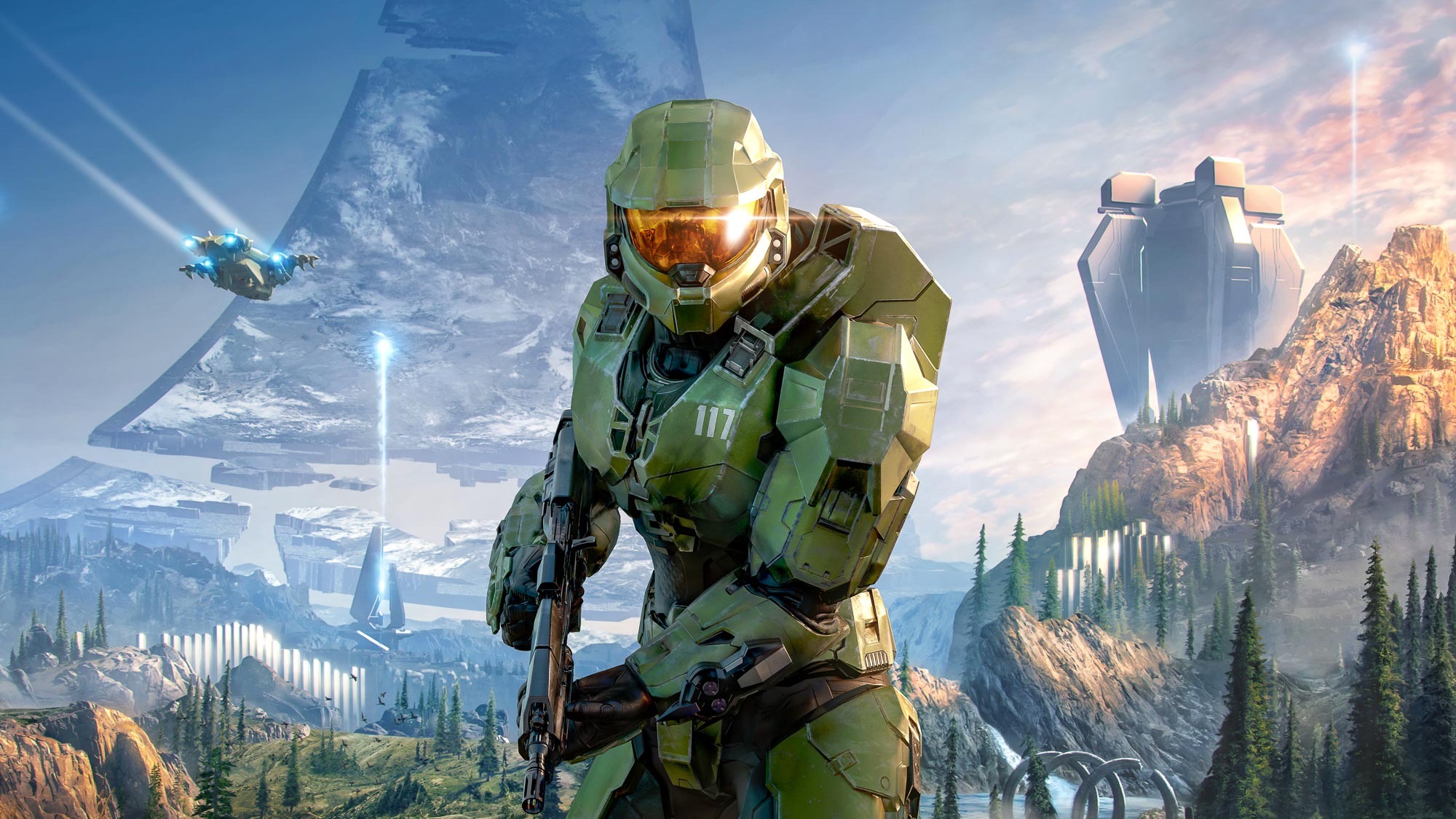 Halo Infinite is a fresh new take on the franchise, and manages to bring everything together into a game that is innovative, familiar, and a lot of fun to play.

Halo Infinite is a fresh new take on the franchise, and manages to bring everything together into a game that is innovative, familiar, and a lot of fun to play.

Halo Infinite has a lot to prove. Not only does the game have to make up for Halo 5’s weak campaign, but it was also subject to widespread criticism at several points during its development cycle. Now that the game is here, the question is, “how did it do?”

Halo Infinite is unlike any other Halo game we’ve seen before, and it is a heck of a lot of fun to play. The game takes some time to get going, but switching to an open-world model was clearly the right move.

In this Halo Infinite review, we’ll take a look at how the game manages to break the mold and do something new, while also remaining familiar and faithful to the classic Halo titles.

Halo Infinite is set two years after the conclusion of Halo 5, and six months after the brutal alien faction known as The Banished seized control of Zeta Halo: one of the ancient superweapons capable of wiping out all life in the galaxy.

You’re back in the boots of Master Chief and, this time, only the Master Chief. You have just one goal on your agenda: Put an end to the Banished threat. That involves playing through the main quest, plus a plethora of side missions, disrupting Banished activities and rescuing captured marines from certain death.

Halo Infinite seems to have taken a lot of cues from 2009’s Halo 3 ODST, but on a much grander scale. I also get the impression that developer 343 Industries took a lot of inspiration from other open-world franchises, such as Far Cry.

The open-world system is not unique, and has you running around, reclaiming UNSC bases to uncover side missions and other points of interest. Completing side missions increases your “Valor” which lets you unlock new and better weaponry. Reclaiming a base doesn’t unlock everything, though, so there are still plenty of reasons to run around and explore.

The most important thing about Halo Infinite’s map is that everything hinges on player choice. While Chief’s new AI companion, The Weapon, will prompt you to complete story missions, you’re free to ignore her and do whatever you like. You can rescue marines, complete side missions or just run around the ring, trying to turn Master Chief into a 26th-century Spider-Man in the process.

Halo Infinite’s grapple accessory may not turn you into a bonafide webslinger, but it is the single most important new feature in the game. Using it in conjunction with the existing sprint and clamber abilities means that getting around Zeta Halo is an absolute breeze. It’s infinitely more fun than following the preset roads and paths.

But despite everything new, Halo Infinite still feels familiar. It’s reminiscent of the first Halo game, specifically the second level “Halo,” in which you explore the ringworld for the very first time. That level drops you onto the ring and immediately puts you to work rescuing marines and sabotaging alien operations in the process.

The similarities between Halo Infinite and the level “Halo” are so clear cut, that it feels as though the level was the recipe 343 used to create the new game. 343 previously announced that Halo Infinite would be a “spiritual reboot”, returning to the spirit of the classic Halo games while still offering something new. The developers definitely succeeded.

On top of this, the developers managed to make the Grunt enemies truly funny again. The little blighters are constantly talking smack when you encounter them, and there were several points where I had to pause because I was laughing so much. The Grunts haven’t been this hilarious since the first time I saw them turn heel and run away screaming in Halo on the original Xbox.

The most important thing is that Halo Infinite has an engaging story. Without delving into spoiler territory, it’s been quite some time since I found myself really invested in the mystery of the franchise’s plot. What the heck are the Banished actually up to, and what went on in the six months since their initial assault on the ring?

That’s not to say there aren’t downsides to the main quest, though. Many missions stick to the old-school linear Halo formula pretty religiously. If you never enjoyed running around inside Forerunner ruins, Halo Infinite isn’t going to win you over.

There also doesn’t appear to be a way to repeat campaign missions, and thus find missing collectibles, without starting the game from scratch. Similarly, there’s no co-operative multiplayer at launch, which means you have to experience the whole game solo for the time being.

Halo Infinite’s multiplayer is more of a mixed bag than the campaign. From a gameplay perspective, it’s very much what you’d expect from a Halo game, and the performance is perfectly in line with my experience playing the campaign.

The multiplayer mode is fun to play (provided you’re not losing), and you have a huge range of weapons and power-ups from which to choose. Simply put, Halo Infinite’s multiplayer is loud and exciting, and you never know what’s coming next — literally. There’s no motion tracker to warn you about enemies that may be hiding around the corner.

Unfortunately, a number of poor decisions hamper Halo Infinite’s multiplayer experience, making it far less enjoyable than it should be. My main criticism is that you don’t get much, if any choice, in what mode you play.

The playlist system from previous Halo games is completely absent, and the game dishes out multiplayer modes at random. You can’t just kill enemies in Slayer mode without the risk of having to play Oddball or Capture the Flag instead.

The only choice you have is whether to pick Quick Play, Big Team Battle Mode (a 24-person arena), Ranked Arena or “Bot Bootcamp’ — a casual experience where teams of four play against bots rather than actual people.

Likewise, Halo Infinite’s Battle Pass and progression have been the subjects of much criticism, since the XP you earn is based on completing challenges rather than your actual skills. Fortunately, 343 Industries has been listening to feedback, and has already made multiple changes in response.

Another major gripe is that Halo Infinite paywalls a lot of customization options, even basic color palettes. Your choices are to pay $10 for a Premium Battle Pass, or buy the cosmetics in the online store with real money. There’s little point in being able to customize your character if all the best options cost actual currency.

Halo Infinite also lets you buy “Boosts” which offer additional XP or an automatic level up. Boosts may not give you an advantage during actual gameplay, but they still feel very much like a pay-to-win system, which 343 promised would not be present in the game.

It’s unfortunate that Halo Infinite is in this situation. I can’t fault the multiplayer gameplay, because it’s everything you’d want from a Halo game and more. But poor matchmaking and a remarkably stingy free-to-play system bring the whole experience down.

While affiliated with the multiplayer mode, Halo Infinite’s Academy feature is a brand new area, which you can play solo and offline. Essentially, it’s a training mode to help you hone your skills and acclimate yourself to Halo Infinite’s weaponry.

Halo Infinite has made a lot of changes to the weapons from earlier in the series. If you’re serious about multiplayer and don’t fancy learning about new guns on the fly, The Academy is there to show you what’s what.

Academy mode is completely skippable, and you’re not going to miss out on anything by ignoring it. But it’s still a smart idea, and whether you’re a seasoned Halo veteran, or a newbie who’s never played a Halo game before, Academy has something to offer you.

Can I play Halo Infinite on Xbox One?

343 Industries designed Halo Infinite as a multiplatform game, playable on Xbox Series X/S, PC and last-gen Xbox One consoles. But following the whole Cyberpunk 2077 debacle, which barely ran on older hardware, despite promises to the contrary, it’s reasonable to be wary.

Thankfully, this isn’t the case with Halo Infinite. While the majority of my time with the game was on Xbox Series X, I did spend some time in the open world with my old Xbox One S. I’m also pleased to report that the game did run pretty well, despite the older hardware.

Of course, the performance wasn’t nearly as good as the Xbox Series X. Graphics and textures look significantly less impressive on the Xbox One, and frame rate takes a very noticeable hit. Overall, though the game ran perfectly well — an impressive feat considering the size of Halo Infinite’s map.

It’s clear that 343 Industries has learned a lot from the mistakes of Halo 4 and Halo 5, and has used that experience to make Halo Infinite a better game. While still imperfect, Halo Infinite manages to blend all the elements that people love about Halo into something new and original.

The Campaign in particular is a significant improvement over what came before. Multiplayer is still the same fun, manic experience that keeps people coming back after all these years. That said, it’s important for 343 to continue listening to feedback to fix some of the game’s problems, particularly where multiplayer is concerned.

Despite its imperfections, Halo Infinite is still a good time all around. Frankly, I just wish we could have had a Halo game like this sooner.