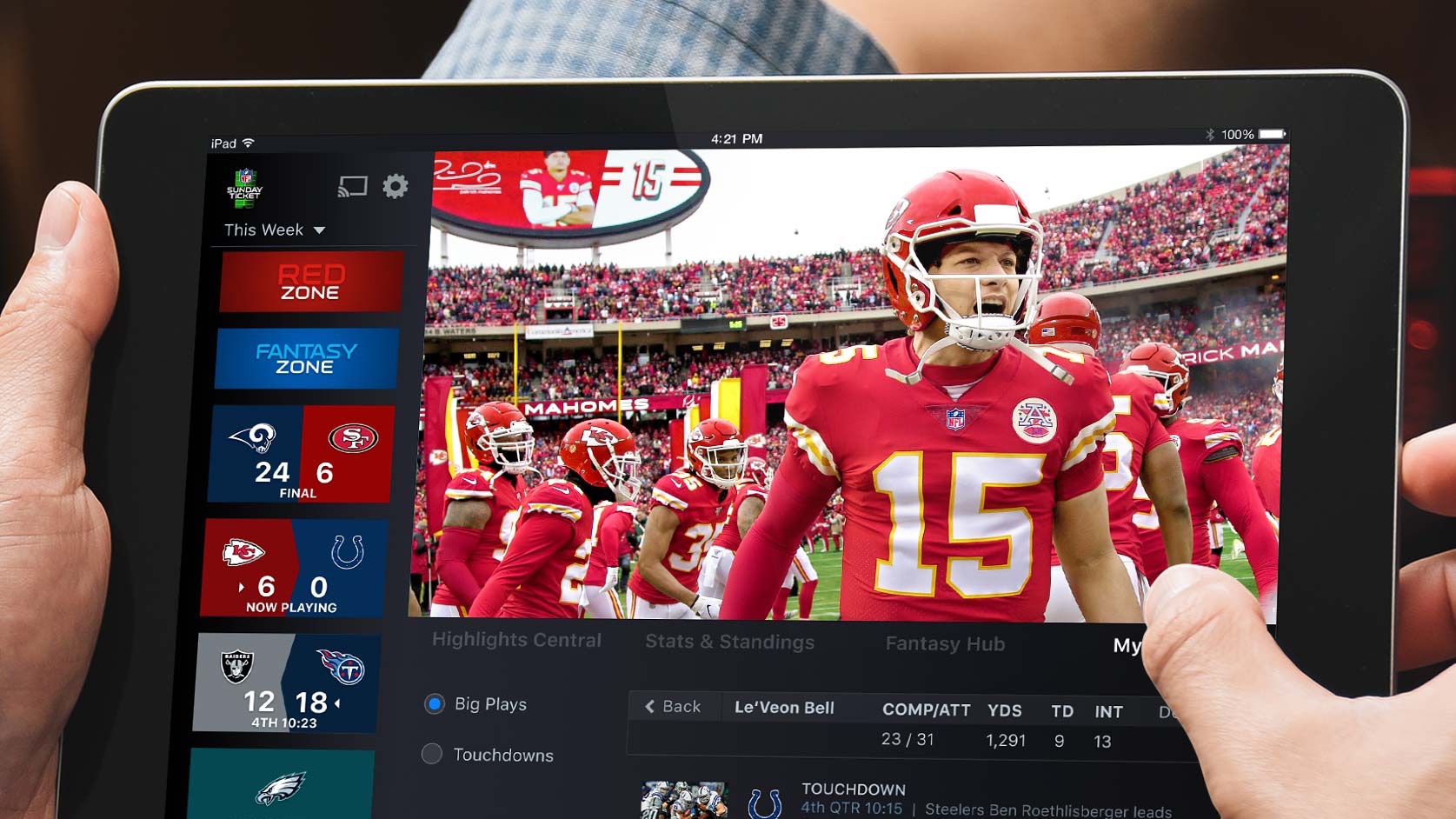 NFL Sunday Ticket is your key to watching all of today’s afternoon football games (and even games on other days) for a single seasonal fee. Yes, even though it’s advertised as a part of DirecTV, NFL Sunday Ticket continues to be available as a standalone service, so you can get it on its own (though you’ll have to make sure you’re eligible).

With NFLSundayTicket.tv, you can watch every live out-of-market Sunday game on your streaming device of choice. There’s even a special university package that lets college students save some cash. Here’s how to get started.

Note that Sunday Ticket doesn’t include the NFL Playoffs, so you should check out our guide on how to watch NFL live streams. Here’s how to get NFL Sunday Ticket without DirecTV.

NFL Sunday Ticket TV (For Everyone)

For a standard Sunday Ticket TV subscription, simply visit the DirecTV website and enter your address to make sure you’re eligible. DirecTV only makes Sunday Ticket available outside of its regular subscriptions if you live in an area that can’t get service from the satellite TV provider; you’re also eligible for the service if you live in a multi-unit residence like an apartment, condo or dormitory.

Should you be eligible, you’ll have two package choices: NFLST.TV To Go and NFLST.TV Max. The To Go package features every live out-of-market game (aka the ones you can’t watch on local TV) on every Sunday afternoon during the regular season. It costs $73.49 per month for 4 months, or a single payment of $293.96.

The Max bundle adds in NFL Red Zone, which lets you watch every single touchdown from Sunday afternoon, and DirectTV Fantasy Zone, which provides stats and analysis for fantasy football junkies. This package costs $395.99 for the season or $99 per month, and you can add in NFL Game Pass, which streams live pre-season games and pre-recorded regular season games, for an extra $50.

If you started out with the NFLST.TV To Go package but find yourself craving more NFL action, you can upgrade to Max at any time. Folks who’ve renewed their subscription from 2017 will be locked into last year’s lower prices, as a token of DirecTV’s appreciation.

Are you a college-bound NFL junkie on a budget? DirectTV has you covered. Those attending two-year or four-year universities can get a special NFLST.TV U package for just $24.99 per month for four months, or $99.96 for the season. Better yet, the student package offers all of the same benefits of the Sunday Ticket Max package, including Red Zone, Fantasy Zone, and the option to add Game Pass for $49.

To qualify for Sunday Ticket TV U, you’ll have to provide your name, birthday and college. As long as the site can find your student record, you’re good to go. As with the other packages, you’ll be locked into last year’s prices if you’ve renewed your subscription.

NFL Sunday Ticket: Where to watch

Whether you just dropped cable or are about to move into a new dorm room, you can stream Sunday Ticket on just about any device that connects to Wi-Fi.

That includes iOS and Android devices, Windows PCs, streaming boxes such as Apple TV, Chromecast, Roku and any Android TV device as well as game consoles such as Xbox One, and PlayStation 4.

Now that you’re all set to enjoy Sunday Ticket even without a full DirecTV subscription, feel free to kick back, order some wings and pray your favorite quarterback doesn’t get injured.

Week 2 sees the Sunday Ticket package look OK, but not as great as last week. Thursday Night Football’s Bengals @ Browns matchup is an NFL Network exclusive, and you’re not getting Monday Night Football — or the late Sunday Patriots @ Seahawks game either.

NFL Sunday Ticket: Does it cover the playoffs?

Unfortunately, no. According to the DirecTV website, Sunday Ticket only covers regular season, Sunday afternoon games that are out of your market. As an alternative, you can subscribe to a streaming service such as Sling TV or YouTube TV, both of which give you access to NFL Playoff channels such as FOX, ABC and CBS. You can also pick up an HD antenna to get those same channels over the air.