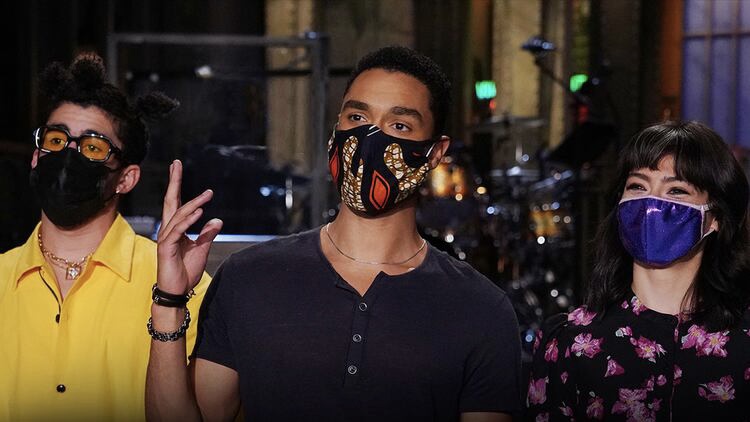 We’re staying up to watch SNL online tonight but the big story isn’t the host, Regé-Jean Page. No offense to Simon Basset, Duke of Hastings of Bridgerton, but his musical guest is one of the biggest music acts in the country.

Tonight, mega-huge recording artist Bad Bunny makes his SNL debut. And there’s also a chance he could get physical. Yes, this musical guest is also a sports entertainer, as Bad Bunny is WWE’s current 24/7 champion.

Will Weekend Update’s Colin Jost and Michael Che (both WrestleMania competitors in their own right) try and take Bad Bunny’s gold? Will Bad Bunny bring 2x WWE Hall of Famer Booker T for a performance of the song “Booker T?” Lots of questions.

As was the case last week, this SNL episode is scheduled to be performed in front of the show’s traditional live studio audience at Studio 8H at Rockefeller Center.

Previous episodes were performed remotely due to the ongoing Covid-19 pandemic, and the production is continuing to follow to safety regulations, including a reduced capacity and face mask wearing.

Here’s everything you need to know about how to watch SNL online:

How to watch SNL online anywhere, with a VPN

Just because NBC isn’t available everywhere doesn’t mean you can’t watch Saturday Night Live if your current location doesn’t offer it. Watching SNL using the service you already pay for, along with the rest of the internet, can be pretty easy with the right VPN (virtual private network), which lets stream the show from wherever you go.

The best VPN service is ExpressVPN. It meets the VPN needs of the vast majority of users, offering outstanding compatibility with most devices and impressive connection speeds. Plus, if you’re ready to commit now, signing up for longer periods of six months or a year reduces the cost even more.

How to watch SNL online in the US

In the U.S., viewers can watch Saturday Night Live if they have a digital antenna or a cable TV package.

If you’ve already cut the cord, you can watch SNL on several live TV streaming services (depending on your region), including Sling TV, FuboTV, Hulu With Live TV, YouTube TV and AT&T TV Now.

Of these options, we recommend Sling and FuboTV, two of the best streaming services on the market. Both of these services offer cloud DVR and on-demand features, allowing you to catch up on the big show via NBC even if you missed it live.

Saturday Night Live episodes also appear on Hulu the day after they air.

Fubo.TV is a great alternative to a cable package. With the Family Plan ($65 per month), you get over 90 channels, including local broadcast networks NBC, ABC, CBS and Fox as well as top cable brands like AMC, E!, HGTV, FX, ESPN, SyFy and Paramount Network. View Deal

How to watch SNL in the UK

Great news for Brits! Saturday Night Live season 46 episodes will air on Sky Comedy the day after the U.S. on Sunday evenings.

Americans abroad who want to watch it live can do so by using a VPN such as ExpressVPN.

How to watch SNL in Canada

Up North, Canadians can watch SNL on the same day and time as Americans on Global TV.