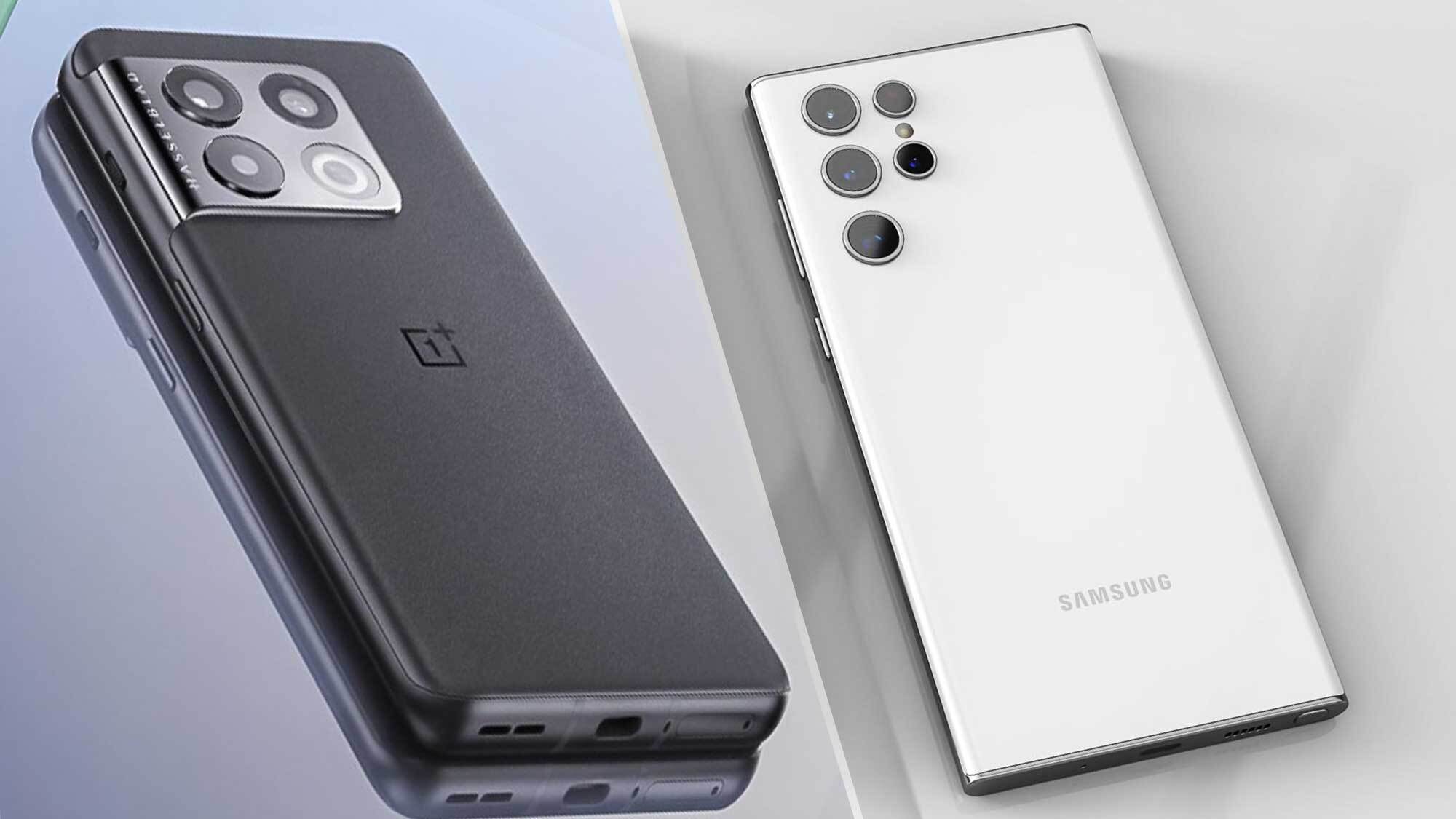 We‘re getting ready for a pretty epic OnePlus 10 Pro vs. Samsung Galaxy S22 Ultra battle later this year, once the two fully-featured flagships arrive on retail shelves. We already have a pretty clear picture of the OnePlus 10 Pro, especially now that OnePlus has fully revealed that phone’s specs. The only thing left is to see if the Galaxy S22 Ultra lives up to the hype created by rumors of this super-sized Galaxy S22 model.

The OnePlus 10 Pro features ultra-fast charging and promises camera improvements thanks to the ongoing OnePlus-Hasselblad partnership that worked such wonders with last year’s OnePlus 9 Pro cameras. Meanwhile, Samsung looks to be taking its cues from the old Galaxy Note line with the S22 Ultra, right down to the phone’s design and the inclusion of an S Pen that had been an optional accessory for the Galaxy S21 Ultra.

That’s just the tip of the iceberg for the changes each phone is promising to deliver. Here’s everything we know about both phones and how a OnePlus 10 Pro vs. Samsung Galaxy S22 Ultra face-off is shaping up based on initial reports about the two devices.

The OnePlus 10 Pro is already out, but the the Galaxy S22 Ultra could land in the hands of more people long before OnePlus’ flagship. Confused? We’ll explain.

Regardless of when the phones arrive, the OnePlus 10 Pro is likely to be the more affordable of the two. The OnePlus 10 Pro sells for 4699 yuan in China, which translates to around $740 in the U.S. That’s significantly cheaper than the $1,069 price the 12GB/256GB version of the OnePlus 9 Pro debuted at, so we’re not sure how accurate that price conversion actually is.

Even if the OnePlus 10 Pro winds up costing as much as last year’s 9 Pro model, it’s still likely to be cheaper than whatever Samsung has planned. At best, Samsung is likely to stick to the $1,199 it charged for the Galaxy S21 Ultra. But a new rumor suggests the phone maker will tack another $100 to the Galaxy S21 Ultra’s price, bringing the possible cost to $1,299.

The two phones won’t look that much alike if rumors of Samsung’s new design for the Galaxy S22 Ultra pan out. The phone is expected to look more like the Galaxy Note phablet, with a wider screen and squared off edges. We’re also anticipating that Samsung’s including a slot for the S Pen on this version of the phone, too, for a truly Galaxy-Note like experience.

We’re expecting the Galaxy S22 Ultra to have a slightly bigger display at 6.8 inches to the 6.7-inch screen that OnePlus has announced for its new phone. And while both phones are going to feature fast refresh rates, the OnePlus 10 Pro uses a newer LTPO 2.0 technology that supposedly improves smoothness. There’s no word if Samsung is planning a similar tweak for its fast-refreshing display.

Instead, Samsung seems to be planning to have the Galaxy S22 Ultra outshine all other phones. Rumors point to the Ultra offering the brightest screen ever on a phone, with leaked test results promising a peak brightness of 1,750 nits.

Cameras figure to be a fierce battleground between the OnePlus 10 Pro and Samsung Galaxy S22 Ultra, as both phones try to stake a claim as one of the best camera phones. It’s a battle OnePlus is better equipped for since it inked a deal with Hasselblad to improve the cameras on its phones. The deal already paid off with the OnePlus 9 series, and OnePlus hopes to keep the momentum going with the OnePlus 10 Pro.

The cameras on the OnePlus 10 Pro aren’t all that different from what the OnePlus 9 Pro offered — the 48MP main, 50MP ultrawide and 8MP telephoto lenses are back, while a dedicated monochrome sensor has been scrapped. Instead of tweaking the camera hardware — though the ultrawide lens can now offer a 150-degree field of view the focus this time is elsewhere, with OnePlus implementing a brand new Hasselblad camera system.

Among the software features added to the OnePlus 10 Pro are the ability to shoot in 10-bit color with all three lenses. You can also shoot in 12-bit RAW format, and a new Hasselblad Master Style offers three presets designed by professional photographers.

Based on Galaxy S22 Ultra rumors, it doesn’t sound like Samsung is planning to overall the camera setup on its marque phone, with the 108MP main sensor expected to return in this version. On the S22 Ultra, though, Samsung’s rumored to be adding an AI-powered detail enhancement mode to call out colors and other details while enhancing brightness.

One rumor we’re still trying to wrap our brain around is the possibility of the Galaxy S22 Ultra getting what’s described as a Super Clean Lens. Our best guess is that this will involve some new type of glass meant to cut down on glare, improving the finished shots.

Very little figures to separate the two phones on the performance front, at least when it comes to versions of the Galaxy S22 Ultra released in the U.S. That version of Samsung’s phone is expected to be powered by the Snapdragon 8 Gen 1 system-on-chip, which also happens to be the same silicon inside the OnePlus 10. Depending on how much RAM Samsung packs into its phone — you can get up to 12GB with the OnePlus 10 Pro, performance should be rather similar.

Outside the U.S., though, Samsung could equip the Galaxy S22 Ultra with its latest Exynos chip. (That’s precisely what Samsung’s done with previous Galaxy S releases — Snapdragon silicon in the U.S. and Exynos chipsets elsewhere.) The new version, the Exynos 2200, features AMD Radeon RDNA 2 graphics, which is the same architecture used in gaming consoles. Nobody’s expecting a PS5 in phone form, but leaked benchmarks do show the Exynos 2200 outperforming the Snapdragon 8 Gen 1. That would make any comparison with the OnePlus 10 Pro very interesting.

The Galaxy S22 is rumored to be getting a boost in charging speed over its predecessor — 45W, which is quite the jump from the 25W wired charging supported by the Galaxy S21 Ultra. Still, even with that improvement, it’s not enough to catch the OnePlus 10 Pro.

OnePlus is also making sure this year’s phone charges faster than last year’s, which is quite a trick considering that recent OnePlus phones have supported 65W charging. For the OnePlus 10 Pro, though, OnePlus is introducing 80W wired charging speeds, which will be the fastest we’ve seen. Like its predecessor, the OnePlus 10 Pro supports 50W wireless charging.

Both phones figure to have 5,000 mAh batteries — OnePlus has already announced as much, and that’s the rumored battery spec for the S22 Ultra. So we’re interested to see which phone lasts longer on a charge, but it will be especially intriguing to see how much faster the OnePlus 10 Pro can charge compared to the Galaxy S22 Ultra.

Both phones will ship with Android 12, along with their own particular interface. In the case of the OnePlus 10 Pro, that’s OxygenOS, though OnePlus’ Android skin has been heavily influenced by the ColorOS produced by Oppo. (The two Chinese phone makers joined forces last year.) We haven’t liked what we’ve seen with OxygenOS 12 thus far, but perhaps the implementation is being fine-tuned for the OnePlus 10 Pro.

Even though the Galaxy S22 Ultra has yet to be announced, we’ve already gotten a good look at Samsung’s take on Android 12, thanks to the beat period for One UI 4, and the fact that the updated software has rolled out to existing Samsung phones. It’s a big update, with a lot of emphasis on widgets and customization, plus an implementation of many Android 12 privacy features.

The big focus with the the Galaxy S22 Ultra, though, will be on its rumored S Pen integration. Yes, the Galaxy S21 Ultra supported the S Pen, but only as an optional accessory. With the stylus now built into the phone, we’re expecting greater functionality that’s more like using the Galaxy Note. And we hope that Samsung even introduces some new tricks for the S Pen that are specifically tied to the Galaxy S22 Ultra.

We’ll know for certain how a OnePlus 10 Pro vs. Samsung Galaxy S22 Ultra face-off shakes down once Samsung confirms the rumored features for its new phone and we have a chance to test both flagships. With overall performance expected to be so similar, we think cameras and battery life will be the decisive factors in which device ranks higher among the best Android phones.