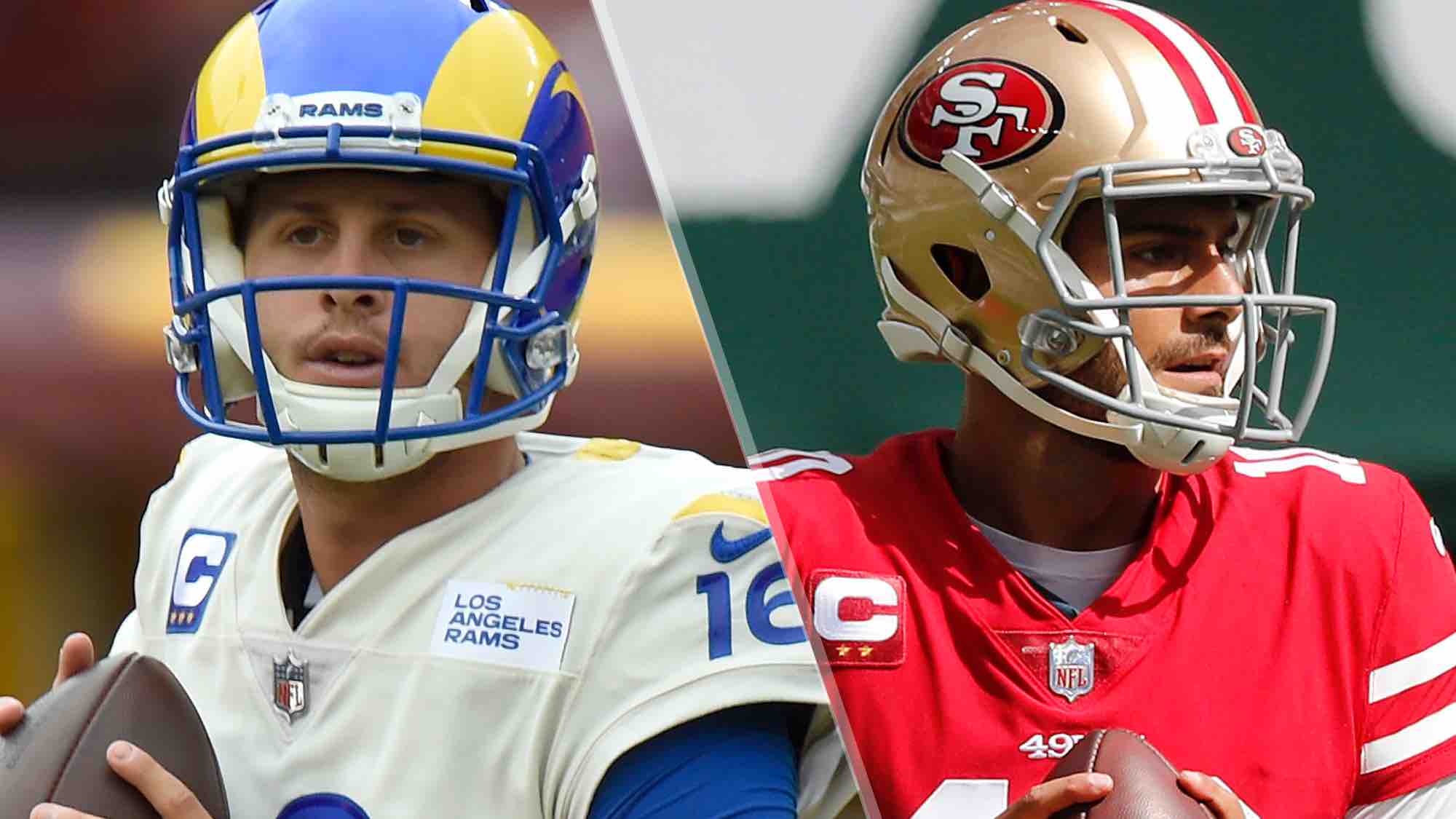 The Rams vs 49ers live stream features teams with very different fortunes this season. 2020 has been a hard year for 49ers fans, especially with the high expectations going into the season. Yet here they stand with a meager 2-3 record, coming off a crushing 43-17 defeat by the Miami Dolphins last week.

This NFL live stream couldn’t be different for the Los Angeles Rams, who have lost just a single game and come into Sunday’s matchup off a solid 30-10 victory over the Washington Football Team last week. They are rated second in the NFC West, behind only the undefeated Seattle Seahawks.

Ranked last in the NFC West, the 49ers have suffered a crushing injury toll on both the offensive and defensive side. Defensive ends Nick Bosa, Solomon Thomas, and Ezekiel Ansah are out for the season. And linebacker Kwon Alexander may have sustained a high ankle sprain, which could keep him out of Sunday’s game. There is a good chance though that cornerbacks Emmanuel Moseley and Ahkello Witherspoon will return to play, as both were at practice this week.

Starting quarterback Jimmy Garoppolo has missed two games with a high ankle sprain. And he might as well have missed last week’s. Garoppolo completed only 7 of 17 passes for 77 yards before 49ers coach Kyle Shanahan replaced him at halftime with C.J. Beathard. Garoppolo had no touchdowns, two interceptions, a fumble and three sacks. And he’s been a sack magnate this year, going down seven times in the three games he’s been able to play.

It’s unclear if Garoppolo will play on Sunday, as Shanahan may want to protect him from more sacks against a particularly aggressive Rams line. Defensive tackle Aaron Donald and linebacker Troy Reeder together had seven sacks against Washington last week. Shanahan will definitely try to run the ball as much as possible.

The Rams will challenge the 49ers with what’s been a great offensive line this season, ranking 4th in yards per game. Jared Goff has been a solid starting quarterback, with 8 touchdowns, 3 interceptions and no fumbles lost. He’s completed 72.2 percent of his passes, vs just 60.6 percent for Garoppolo.

The performance of LA’s defense is less inspiring, though. It ranks fourth in yards conceded per game, and just 28th in adjusted line yards. Although with the 49ers own weakness in gaining yardage, it may not take much to hold them back on Sunday.

The number crunchers at OddsShark expect the Rams to prevail, giving a 3.5-point spread.

Here’s what you need to watch Rams vs 49ers live streams on Sunday Night Football:

How to watch Rams vs 49ers live streams with a VPN

Football fans, if for some reason you’ve had to leave your own “bubble” — or you can’t get NBC where you are — and you can’t watch the Rams vs 49ers live stream, you don’t have to miss the game. With a virtual private network, or VPN, you can appear to be surfing the web from your home town (or somewhere that blackouts won’t hit), and access the same streaming services you already paid for.

Rams vs 49ers live streams in the US

Of the two, football fans will probably want fuboTV, as it has all five of the main channels you’ll want: CBS, NBC, Fox, ESPN and the NFL Network. That’s why it’s one of the best streaming services.

Sling may get you this game, but it doesn’t include CBS (nor NFL RedZone). It’s a case of “you get what you pay for” since Sling Orange & Blue (which you’d need to get ESPN, FOX and NBC and the NFL Network) costs $45 per month, while the Fubo TV Standard package gives you all of the above, for $59.99 per month.

Sling TV is an affordable live TV service with some of the channels that football fans want, providing a middle ground. The $45 per month Sling Orange + Blue package has NBC for this game, as well as ESPN and local Fox affiliates.View Deal

If Rams vs 49ers is airing on the NBC affiliate network in your market, you don’t even need to pay. With one of the best TV antennas, you can watch live, pulling the game out of the sky.

Rams vs 49ers live streams in the UK

You can watch Rams vs 49ers live across the pond, even if it is an an ungodly hour of 1:20 a.m. local BST. Yes, those in the U.K. will want Sky Sports for watching NFL games in the U.K. It will also feature more than 100 live games this season. It airs on Sky Sports NFL.

Get in, folks, we’re going to Da Zone. Or to be more specific, Canadian football fans will need DAZN to watch Rams vs 49er live streams in Canada.