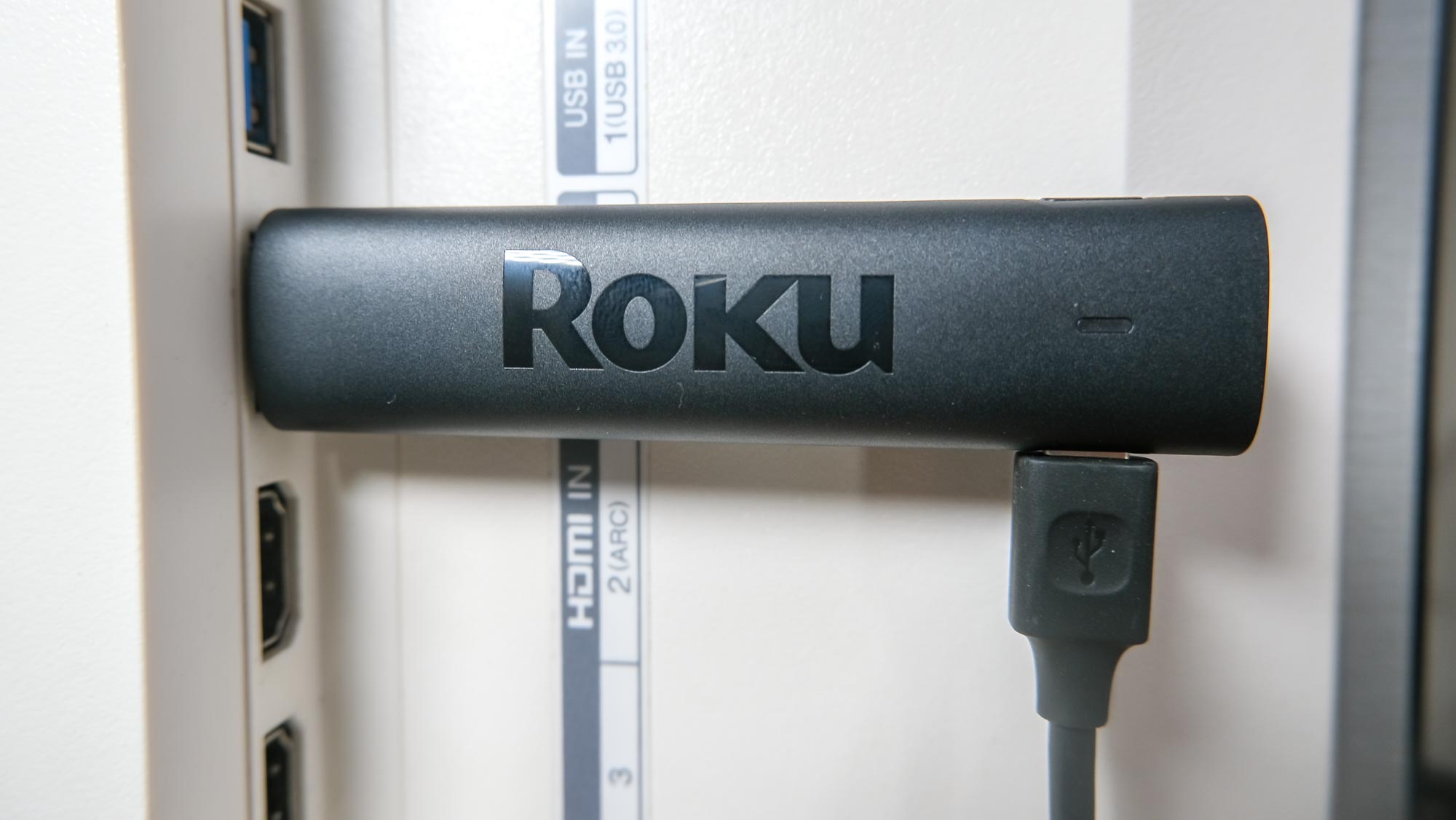 Roku Streaming Stick 4K Plus improves a bit on its predecessor, finally offering Dolby Vision and packaged with the excellent Voice Remote Pro.

Its primary competitors are the Amazon Fire TV Stick 4K Max ($55) and the Chromecast With Google TV ($50). And, of course, the regular Roku Streaming Stick 4K (which is the same device, but without the Voice Remote Pro).

Roku Streaming Stick 4K Plus is available for preorder and will start shipping October 17 on Roku.com, Amazon and other retailers.

Identical to its predecessor, the Roku Streaming Stick 4K Plus is a slim, black rectangular dongle that sits unobtrusively behind your television. It measures 3.7 x 0.8 x 0.5 inches and has an HDMI plug on one end. On the side, there is a port for its USB power cable. That cable has something new — an in-line long-range Wi-Fi receiver measuring 3.3 x 0.6 x 0.3 inches.

The Streaming Stick 4K Plus is designed so that you never have to see it or think about it after plugging it into your TV. In that way, it’s similar to its main competitors, the slightly larger Fire TV Stick 4K (4.3 x 1.3 x 0.5 inches) and Chromecast With Google TV  (6.4 x 2.4 x 0.5 inches).

As for the included Voice Remote Pro, more on that below.

I don’t have much new to say about the Roku interface, which has basically remained the same for several years now. Why mess with a good thing? Roku’s interface is simple, clean and easy to navigate. The Home screen is populated by apps represented in square boxes, much like the Apple TV 4K — though the Streaming Stick 4K Plus is much cheaper than that $179 device.

The elegance of the interface is one of the reasons I favor Roku over Fire TV, which sublimates apps to promote Amazon’s content. Even the Roku Channel is merely listed among the others, not blasted into your eyeballs.

The new RokuOS 10.5 brings several updates, mostly to voice functions. The most welcome one is the ability to use voice to spell out passwords on some on-screen keyboards. This is a feature missing on Fire TV Stick 4K and Chromecast With Google TV, so Roku now has a leg up.

The other voice improvement is that you can directly launch shows on Netflix and music on Spotify with a command. I tried it out and said “Hey Roku, play Maid on Netflix.” Now, “Maid” is a tricky word, so Roku opened a Netflix search screen. But the same command for Squid Game worked perfectly and found the Korean drama’s title page. It didn’t start playing the episode I was in the middle of (instead letting me decide where to start), but I’m not mad about it.

Roku’s also allowing you to edit the grid in The Roku Channel’s Live TV section, though this is where I found myself disappointed.

This section only allows The Roku Channel’s free linear TV content (which is made up of ad-supported content from names you may be familiar with, such as This Old House, ABC News Live, NBC News Now, Vice), and your mileage may vary.

The Fire TV’s Live TV grid, though, integrates with cord-cutter services such as Sling TV — a huge boon for cord-cutters like myself.

The Roku mobile app allows you to have private listening via whatever headphones you use. Roku’s added optimizations for wireless headphones this year, for reducing latency (of which I saw none) between sound and video. I had one awkward moment with private listening via the app, though: I heard small beeps during the first few minutes of testing. They went away quickly.

Roku added a new quad-core processor to the Streaming Stick 4K Plus that the company claims makes it 30 percent faster than the previous model. I didn’t have one to test against the new device, but but we did have the top $50 streaming devices: the Chromecast with Google TV and Amazon Fire TV Stick 4K.

As a test, we restarted the Roku Streaming Stick 4K, the Amazon Fire TV Stick 4K and the Chromecast with Google TV, and then (using a stopwatch app) timed how long it took to open Netflix, YouTube, Disney Plus, Sling TV and Apple TV Plus. The times, as you’ll see below, are pretty similar throughout.

There’s a small margin of error with this kind of eyeball/stopwatch test. But the main takeaway is that the Roku Streaming Stick 4K Plus generally performs better than the Fire TV Stick 4K for most of the major apps.

In my personal testing, the Roku Streaming Stick 4K Plus felt snappy. Apps loaded quickly — generally within 5 to 6 seconds, but occasionally more like 10 seconds. Navigation was fairly smooth, though scrolling quickly through Netflix or Disney Plus did get a bit choppy here and there.

While the performance of the Roku Streaming Stick 4K Plus doesn’t feel vastly superior to its predecessor, it does get a video upgrade it has conspicuously been missing — Dolby Vision. That’s something both the Fire TV Stick 4K and Chromecast With Google TV have, and now Roku has finally caught up.

Everything I played looked incredible, from Loki on Disney Plus to Ted Lasso on Apple TV Plus to Wonder Woman 1984 on HBO Max. The video was crisp, clear, vivid and bright. The colors popped, the blacks contrasted very well. In the season 2 finale of Ted Lasso, the players’ red, blue and yellow were rich and brilliant against the more dull green of the pitch. In the last image of the episode, I could see the subtle details on the black jacket worn by a particular character.

The Streaming Stick 4K Plus still lacks the surround sound technology of Dolby Atmos, which both the Fire TV Stick 4K and Chromecast with Google TV both  have. I didn’t really miss it, but you may feel like the soundscape of big action movies feels less immersive.

Roku’s search works just fine, comparable in speed to Fire TV. Using the voice function is much preferred than typing out searches, either on the remote or on the app. Regular search brings up just a list, while voice search brings up a nicer-looking page of thumbnails.

There were occasional misunderstandings, just like Alexa search on Fire TV. They both heard me correctly about 90 percent of the time.

I said “Hey Roku, Harry Potter” and among the results was a “zone” where Roku lists all the movies as well as other titles featuring the cast members. When I searched for Oscar Isaac, it listed his most recent movies and TV shows, stuff I could watch for free (including the excellent Ex Machina and A Most Violent Year) as well as options to rent or buy. However, the search result for Taylor Swift was disappointing, as it only tried to take me to Spotify. Swift should have video results, such as Folklore: The Long Pond Sessions on Disney Plus.

The only differentiator between the Roku Streaming Stick 4K Plus and the regular Stick 4K is that the former comes with the Voice Remote Pro. I reviewed the accessory on its own earlier this year and found it to be great. In fact, it won the 2021 Tom’s Guide Award for Best Streaming Device Remote, even beating out Apple’s new Siri Remote for the Apple TV 4K.

Like the regular remote, the Voice Remote Pro has a pleasing rectangular form factor that sits nicely in your hand. It has a headphone jack for private listening, as well as all the standard buttons for power, playback and navigation. It also has four branded buttons for Netflix, Disney Plus, Apple TV Plus and Hulu. These may be annoying for someone who doesn’t have these services, but the remote does have two customizable buttons that saves voice commands. I said “Hey Roku, open Spotify” and then long-pressed “1” to save that action.

Aside from the customizable buttons, there are two key things that separate the Voice Remote Pro from the regular remote. The first is that it’s rechargeable, so no need for AAA batteries. Roku says that the remote will last two months on a single charge, but I’ve never used it long enough to verify that claim. In any case, the rechargeable battery makes the remote slightly heavier than the regular version, but it’s worth it not to have to dig around my junk drawer.

The other upgrade is that the Voice Remote Pro has an always-listening function, which can be toggled on and off. When it’s on, you can just say “Hey Roku …” out loud, followed by a command. I used it to turn on my television, open Netflix, search for shows and control playback. Make sure to speak loudly and enunciate clearly, though. I apparently don’t do the latter and Roku misunderstood several of my commands, like “pause” (tried to search for “pals”). With always-on, you can also easily find the remote when it inevitably disappears into the couch.

Don’t want your remote always listening? (Raising my hand) Toggle the function off. You can still use the microphone button to speak voice commands.

Roku has almost every app you might need or want — so many that there are probably dozens you’ve never even heard of. The site 42matters claims Roku has more than 26,000 apps while the Fire TV supposedly has 12,700 apps. At that level, it’s really hard to point to the differences. Both have all of the best streaming services and the best cable TV alternative apps.

There is a major one that’s missing: YouTube TV. The companies had a bit of a tiff and YouTube TV pulled its app from the streaming channels store. Now, YouTube TV subscribers have to access the service through the regular YouTube app. So it’s still technically there, but it just requires an extra click or two to find.

While the Roku Streaming Stick 4K Plus doesn’t support other kinds of streaming (like Chromecast does with Nest cam feeds), it does allow for screen mirroring (unlike the Fire TV Stick 4K).

As this Roku Streaming Stick 4K Plus review has shown, it is not so much faster or more powerful than the previous model that it demands you upgrade immediately. That’s not a knock on Roku at all; in fact, it’s a compliment. Roku devices are so reliable and do their job so well that it’s hard to imagine how they would drastically improve on them. If you demand Dolby Atmos, you could save $20 with the Chromecast with Google TV, but you’d also be giving up that rechargeable remote with its programmable buttons.

Still, the Streaming Stick 4K Plus brings welcome upgrades in the addition of Dolby Vision and the Voice Remote Pro. If you do happen to be in the market for a new device, it delivers all the ultra-HD streaming, video quality and speed that anyone could need, along with a wonderfully simple OS, and at a very reasonable price. It’s a wise investment because you probably won’t need to upgrade to a new device for some time. Sorry, Roku, you did this to yourselves by making a great product in the first place.