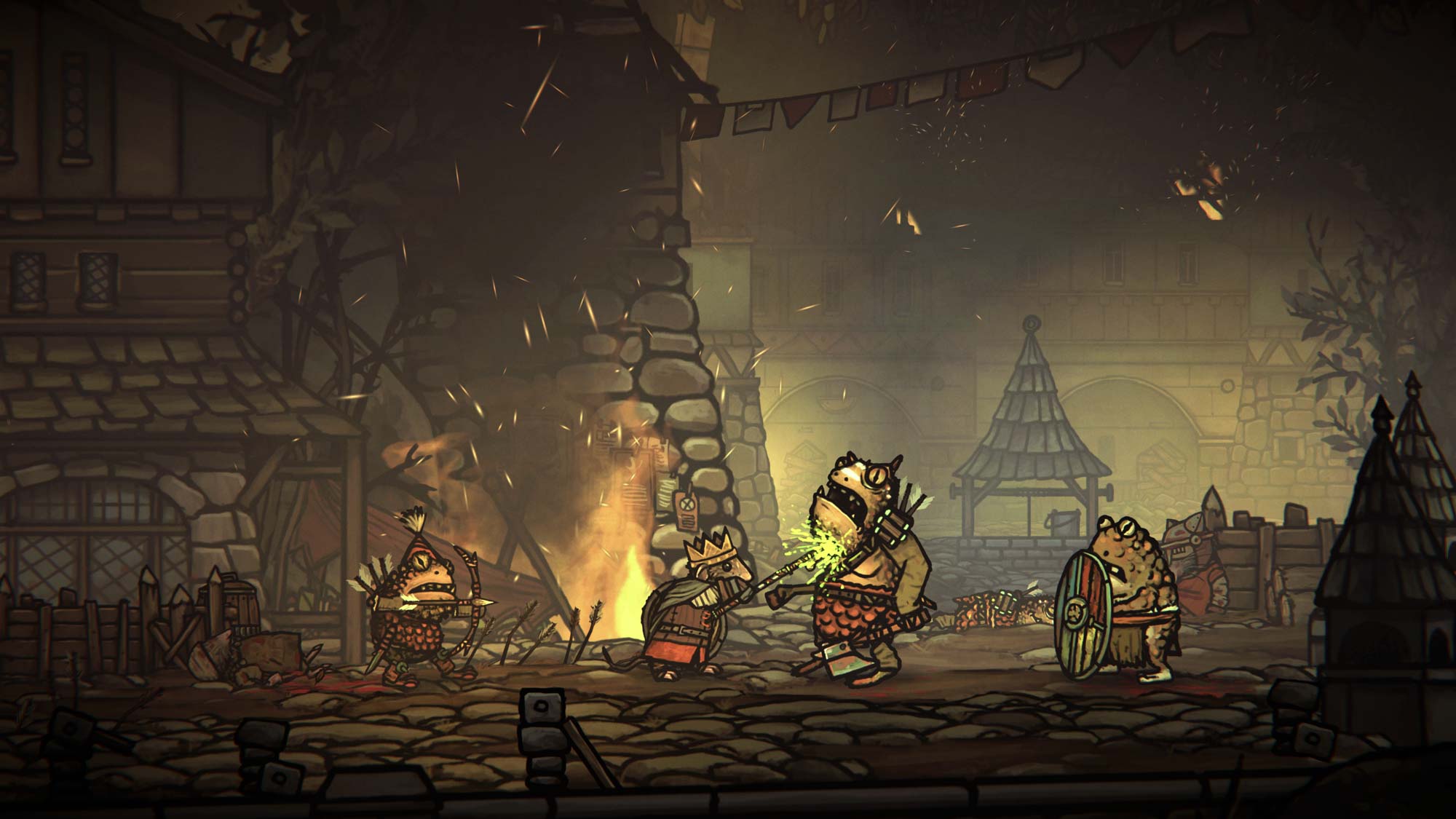 Tails of Iron is a beautiful and charming side-scroller with brutal combat and a grim story. Fight as the rat king Redgi and reclaim your kingdom.

Tails of Iron challenges you to reclaim your fallen kingdom from the clutches of a horrible frog clan. You’ll fight harrowing battles, dodging and parrying your way to victory. This is a game that gives no quarter, demanding that you learn its intricacies right off the bat. Just be ready to fail over and over again as you get better, and prepare yourself for many “You Died” screens.

This game is tough, brutal and grisly, but it all creates a certain charm that’s hard to describe. It’s like a bloody and war-torn version of Redwall. On the one hand, Tails of Iron features a drop-dead beautiful hand-drawn art design, an endearing silent protagonist and veteran voice actor Doug Cockle as the narrator. On the other, you’re left to deal with a dark and grim story, which pits you against many a merciless and murderous enemy.

In this Tails of Iron review, I’ll break down this game, in which you must reclaim your crown and throne, and push back the frogs that have invaded and pillaged your home.

At its core, Tails of Iron has very simple gameplay. You attack, dodge, block and parry. Combining these skills can be a true challenge, however. Each enemy type and boss has its own moveset and quirks, forcing you to adapt, lest you die repeatedly.

Tails of Iron is no walk in the park. The developers have outright said they were inspired by the Souls-like genre, as well as other side-scrollers like Hollow Knight. This isn’t a Metroidvania, but rather an RPG-lite. You don’t have stats to invest in, but you do get a wide array of armors, shields and weapons to suit your playstyle. For example, heavy armors soak up more damage, but they also greatly hinder your dodge roll.

This is a game of give and take. Some weapons hit harder, but others attack faster. Ranged combat has its place, but it can also get you into trouble if you’re not careful. Healing is a slow process, meaning that you’ll have to judge when it’s the best time to recover your health.

Combat is brutal, there’s no way around it. Tails of Iron severely punishes your mistakes, as even the most basic of enemies can take you down quickly and efficiently. But you’re not defenseless. Your shield can take a lot of damage, your dodge can get you to safety, and your parry is an extremely effective counter. In fact, some attacks require parrying.

The brutality of the combat can be simultaneously frustrating and rewarding. Keeping the enemies’ different tells — and which attacks require a dodge, parry or block — straight in your mind takes some getting used to. You might find some deaths to be cheap. But the game never feels unfair. Tails of Iron truly captures the main appeal of Souls-likes: the intense sense of satisfaction from overcoming something that initially feels insurmountable.

You’ll explore a wide variety of environments with their own enemies, residents, quests and treasures to find. Unlocking new armors and weapons is the key to success, since some gear is more effective against certain enemy types. Some you can buy, some you can find and some require crafting.

At the top, I said Tails of Iron is like a grimdark Redwall. The rat kingdom is plagued by war with the Frog Clan. The game starts with an end to the rats’ fragile peace. You play as Redgi, a diminutive rat who is heir to the throne. Redgi’s goal is to reclaim his kingdom and push the frogs back into their swamp.

As you get further into the game, you find that not all is as it seems. While the frogs are certainly cruel and needlessly violent, they have a deeper motivation than just wanting to kill the rats. There’s an interesting (if blunt) meta-narrative in Tails of Iron that adds to its grisly charm.

The world you’ll explore is fraught with danger, but you’ll also meet some friendly NPCs along the way. Some even help you with certain quests, adding a sense of companionship in an otherwise-lonely game. If you’ve played Hollow Knight, Tails of Iron does a pretty good job of capturing the same atmosphere, albeit in a different setting.

By far, the best thing about Tails of Iron is its art design. The game is simply stunning, with hand-drawn visuals that contrast heavily with the darker themes of the story. Every scene was a treat to behold, and even the different equipment sets look great. This is truly a game that lives by its aesthetic, and I love it.

On a gameplay front, Tails of Iron has smooth animations, vibrant attack telegraphs and satisfying effects that show your combat prowess. This is not only a beautiful game, but also one that plays well. I didn’t encounter any graphical glitches or frame rate drops, just a seamless visual experience.

Tails of Iron’s sound also impressed me. Doug Cockle, best known as the voice actor for The Witcher’s Geralt of Rivia, narrates the game in his signature gruff, raspy voice. The sounds of battle that accompany you throughout the game also tell their own story, even down to the different noises the enemies make.

Other than Cockle’s narration, there is no voice acting in the game. In fact, there’s no written dialogue at all. The characters all communicate (to you) through pictographs and wordless noises. This won’t be to everyone’s liking, but it’s pretty minor. You don’t really lose out on any story beats; the narrator fills in the gaps for you.

Just be prepared for intense combat that will really push your limits. You will have to fight multiple enemies at once and it can be pretty stressful. But if you like challenging games, then I heartily recommend Tails of Iron. It’s well worth the time and reasonable price.

Jordan is the Phones Editor for Tom’s Guide, covering all things phone-related. He loves nothing more than relaxing in his home with a book, game, or his latest personal writing project. It’s hard to nail down one thing that Jordan is passionate about, since his attention span for a single given topic or activity doesn’t last long. Jordan tends to lurk on social media, but you can best reach him on Twitter.