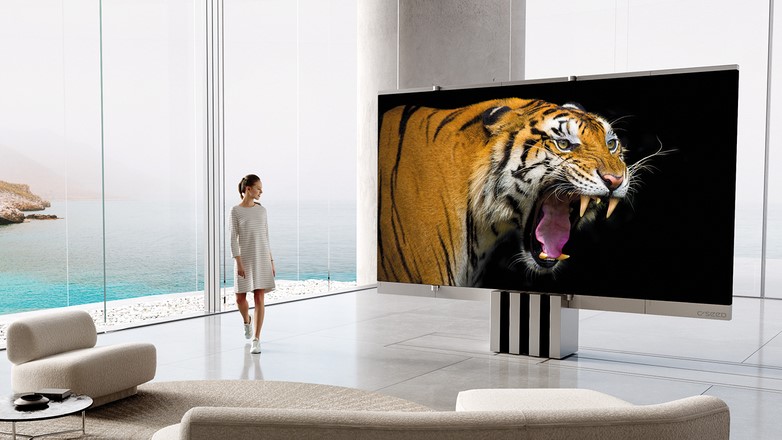 The very last quality you’d expect a 165-inch TV to possess is discreteness, and yet this giant offering from Austrian designers C-Seed offers just that.

When not in use, the seven-foot-tall M1 4K 165-inch Micro-LED TV folds neatly into five panels and then silently disappears into the floor. You have to see thing below in action.

With C Seed’s Adaptive Gap Calibration Technology, the company claims you won’t be able to see the borders between the screens in use, either. The panels use 4K Micro-LED technology and support for HDR 10+, so picture quality should be on point, too.

Before you reach for your credit card, it’s probably worth warning your bank of your upcoming expense, because these kinds of specs don’t come cheap. You’re looking at an outlay of $400,000 to get this Micro-LED set into your home, which puts it out of the reach of all but the most spendthrift of multimillionaires.

Other than the sheer scale of the TV, another reason for its high price is the use of Micro-LED technology. As the name suggests, it involves the use of microscopic LEDs as individual pixels on the screen. Each pixel contains red, blue and green LEDs, which combine to reproduce any color you’d imagine. When combined with millions of other microscopic LEDs, the result is a full 3840 x 2160 picture that should offer similar black levels to OLED screens without the risk of burn in.

Micro-LED TV tech is pretty new, with Samsung first demoing its take in 2018, and it’s still reserved for commercial-grade displays of upwards of 120 inches. Indeed, Samsung’s first commercially available panel – The Wall – is said to start at around $300,000 for a 146-inch version which still isn’t going to fit in most living rooms (or household budgets).

The good news is that Samsung is planning on making its MicroLED offerings smaller, and therefore presumably cheaper. Versions of The Wall will go on sale in 110-inch, 99-inch and 88-inch flavors this year, and hopefully that will bring the pricing down. Even then, it’s likely going to be some time before the technology is affordable to most households looking for an upgrade.

Fortunately, there are plenty of quality sets available for smaller budgets. Be sure to visit our guide to the best TVs for some guidance if you’re a few hundred thousand short of being able to afford C-Seed’s tech.