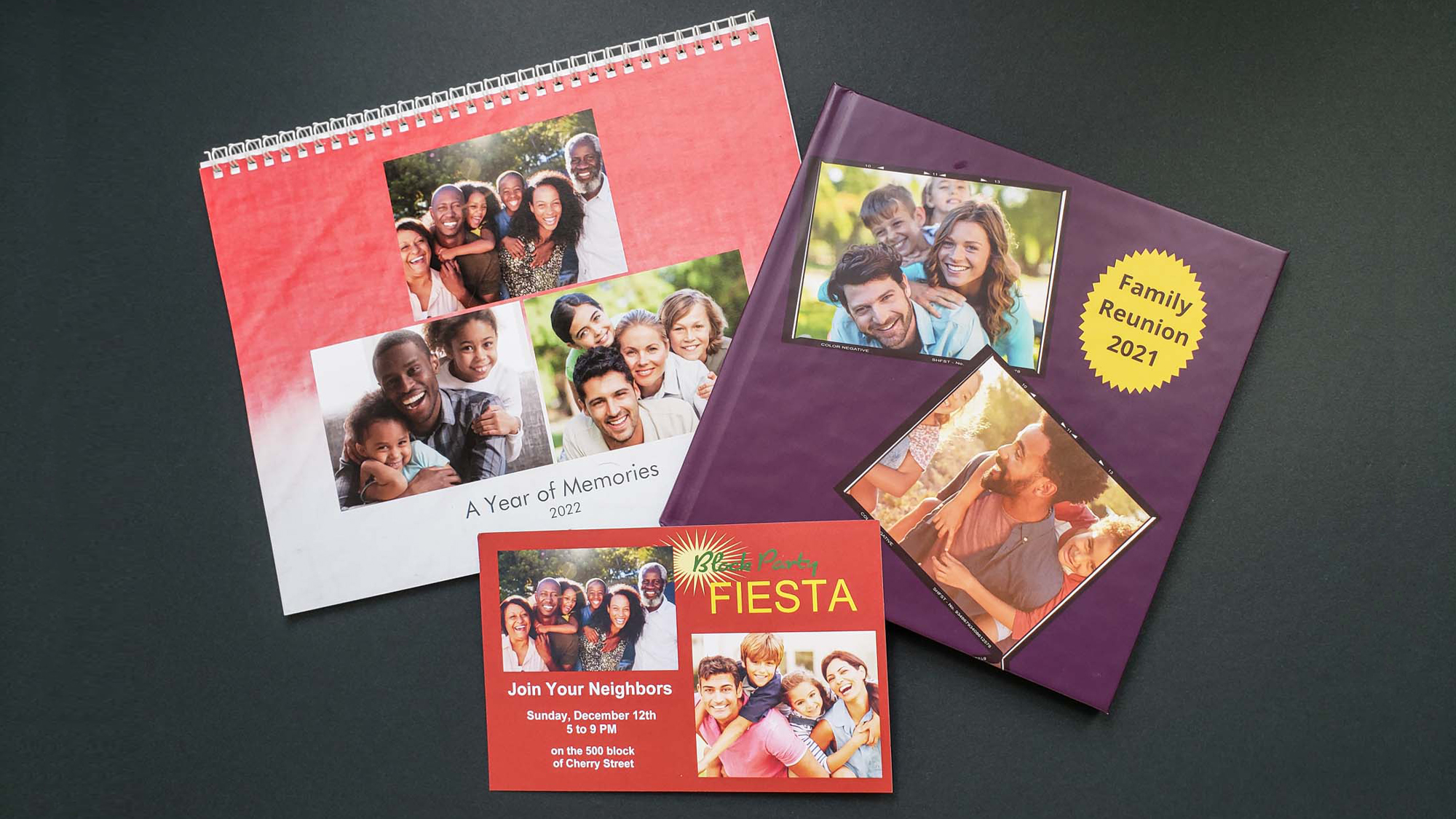 Vistaprint’s software is limited, and its printed products are, at best ho-hum. For far better software and print quality, go with Printique or Mixbook, whose books and calendars are priced similarly to Vistaprint’s. Or if budget is more important than creativity or quality, check out Costco’s bargain prices.

Vistaprint’s focus is on providing customized paper products for small businesses, and it’s a popular site for business cards. However, its photo books, cards and calendars tend to be less than exciting, and the software is designed more for quick work than customization or creativity. In our tests, while the calendar has good quality photos, the pictures of our card and calendar are only average or below average.

What’s more, the production quality of all three projects was disappointing. The kicker is that the prices of Vistaprint’s book and calendar are similar to Printique’s and Mixbook’s, which have far more flexible, creative software and produce much higher quality printed products. Vistaprint’s cards are less expensive than Printique’s and Mixbook’s, but if budget rather than customizability and quality are your determining factor, then check out Costco’s bargain prices instead.

Vistaprint photo cards
Vistaprint’s cards are priced on a sliding scale by volume, and vary depending on your choice of card stock. The price for 10 4.6×7.2-inch cards on standard matte is $1.45 each. 50 cards cost $1.35 each, and 100 cards cost $1.28 each. At the lowest volume (10 cards), upgrading to Premium Matte, Linen or Premium Glossy costs 16 cents more. All cards include blank envelopes; printing your return address on them costs 46 cents each.

Vistaprint doesn’t offer book templates. Instead, you have the option of starting with a blank book or having its software automatically lay out your pictures into a book, while its algorithms eliminate duplicates and blurry images. The book creation software is nicely flexible, but it has limited options. Incidentally, the book interface wouldn’t open for me on Windows under Chrome or on Apple under Safari; it worked fine with Firefox.

The library of optional book page layouts is varied, though not large, but it’s easy to add, delete, move, resize, and rotate photos, text and clip art. More problematic is the fact that when I tried to sort the photos (new to old or old to new), it didn’t work. That would make it difficult to find a specific image, if you’ve uploaded numerous photos for the book.

The lack of a search engine for book page backgrounds, frames, and clip art isn’t much of a problem, because the libraries are far smaller than that of Printique, Mixbook or Shutterfly. On the other hand, they are generally well-organized into logical categories. The selection of backgrounds available for the book cover are limited to 29 solid colors; however, interior page backgrounds include a nice though not overly generous selection of attractive graphics, textures and photorealistic images. One of the best features of the book software is the variety of cutout shapes and masks, which include fun edge effects and gradient masks (so a photo can be made to fade into the page). On the other hand, clip art is very limited to unsophisticated, often juvenile graphics, and decorative frames are available in only a few colors which can’t be edited. Text input is simple, at set font increments rather than a size slider, but more importantly the book interface offers only a handful of font colors, and the spacing between lines is sometimes unattractive. The photo editing consists only of an auto-enhance and two filters (b&w or sepia). The software has no drop shadows or decorative text.

The calendar software is far more limited than that for the book. It has no photo edit tools, background options, clip art, masks or cutout shapes. Layouts are limited and uneditable, so I couldn’t move, resize or rotate photo placeholders. Selecting a design option changes all the months to match the new design template. What that meant was that I couldn’t select a fill-page photo for one month and a background around the photo for another month. Nor could I choose among the background colors/designs available in the selected template month by month.

When I dragged and dropped a photo into a calendar’s placeholder, it initially scaled the picture to fit the space, which often resulted in a fun-house-like distortion. I had to click on the picture, select crop and then edit the crop area in order to get rid of the distortion. Text that is part of a layout design is permanently affixed to the page. While you can add captions to the photo pages in the calendar, you’ll have no choice of location, font or style. When creating an event on a date, you can’t add a photo, though they do have cartoonish icons such as a birthday cake or a heart. If you want the event icon to display in color rather than greyscale, you have to pay $1.99 extra.

While limited, Vistaprint’s card software is more flexible and versatile than Shutterfly’s or Costco’s restrictive card interfaces. In fact, two key features in Vistaprint’s card interface are better than in its own book or calendar software. Colors may be chosen not only from a small number of swatches, but also from a full 24-bit color wheel and can be designated by CMYK values.

Though the photo editing tools certainly aren’t as robust as Mixbook’s or Printique’s, Vistaprint’s card interface has sliders for adjusting a photo’s color, saturation and lightness. As in the Vistaprint book software, photos and text on the card can be moved, resized, cropped, added and deleted, but unlike with the book, the placeholders can’t be rotated. On the downside, the card software has no alternative backgrounds beyond solid colors, and no clip art other than a handful of shapes (arrow, rectangle, oval and starburst). But you can add a table and a QR code.

Vistaprint photo book
The physical Vistaprint book was higher quality than Costco’s, but that’s the best we can say about it. Shutterfly, Mixbook and Printique’s books’ were significantly superior. Vistaprint’s book  cover was plasticky, with the feel of numerous bubbles captured under the surface, probably due to uneven gluing. As soon as we opened the book, we noticed that the binding was already beginning to crack with stitches significantly exposed on the front and back inside, and to some extent, on internal pages.

The photos were generally bright and lively. However, the interior photos tended to be yellowish, and the midtones weren’t as rich as Printique’s or Mixbook’s. Also, a number of the photos on both the cover and the interior pages were overexposed. Still, photos were sharp and clear, and the type was clean and well-formed.

Vistaprint calendar
The rich, lush colors of Vistaprint’s calendar were on a par with the Printique calendar, and were well balanced across both light and dark skintones, which were pleasantly warm. The exposure was also similar to Printique’s, with good detail throughout the dynamic range, but didn’t have the same density of darks as Printique’s photos.

However, images were blurred, which is noticeable to the naked eye. Type was generally well-formed, but some letters had messy margins on close inspection. The average quality paper felt cheap, but it had a satisfying weight.

Vistaprint photo cards
The photos on the Vistaprint card had an unappealing yellow-orange tinge. While the midtones and highlights were detailed, and the shadows are blocky.

Focus was sharp. Type was well formed, though on very close inspection, it had some ink dropouts. The card stock, which isn’t as thick as Mixbook’s or Printique’s cards, had a smooth finish similar to Costco’s.

Vistaprint’s book and calendar are priced similarly to Mixbook’s and Printique’s, but Vistaprint’s final products don’t have anywhere near their quality. Though Vistaprint’s cards are less expensive than those two frontrunners, both the software and the printed cards are disappointing. We recommend bypassing Vistaprint and using Printique or Mixbook for flexible, creative software and higher quality. If budget is the determining factor rather than customization or quality, go with Costco.

(www.DigitalBenchmarks.com). The scripts she created for various tech publications for testing and

standards. Among her numerous books is the first major volume on image processing “Digital Imaging

for Visual Artists” (McGraw-Hill), co-authored with Daniel Grotta. Her hundreds of reviews, stories and

columns have appeared in scores of magazines, journals and online publications.