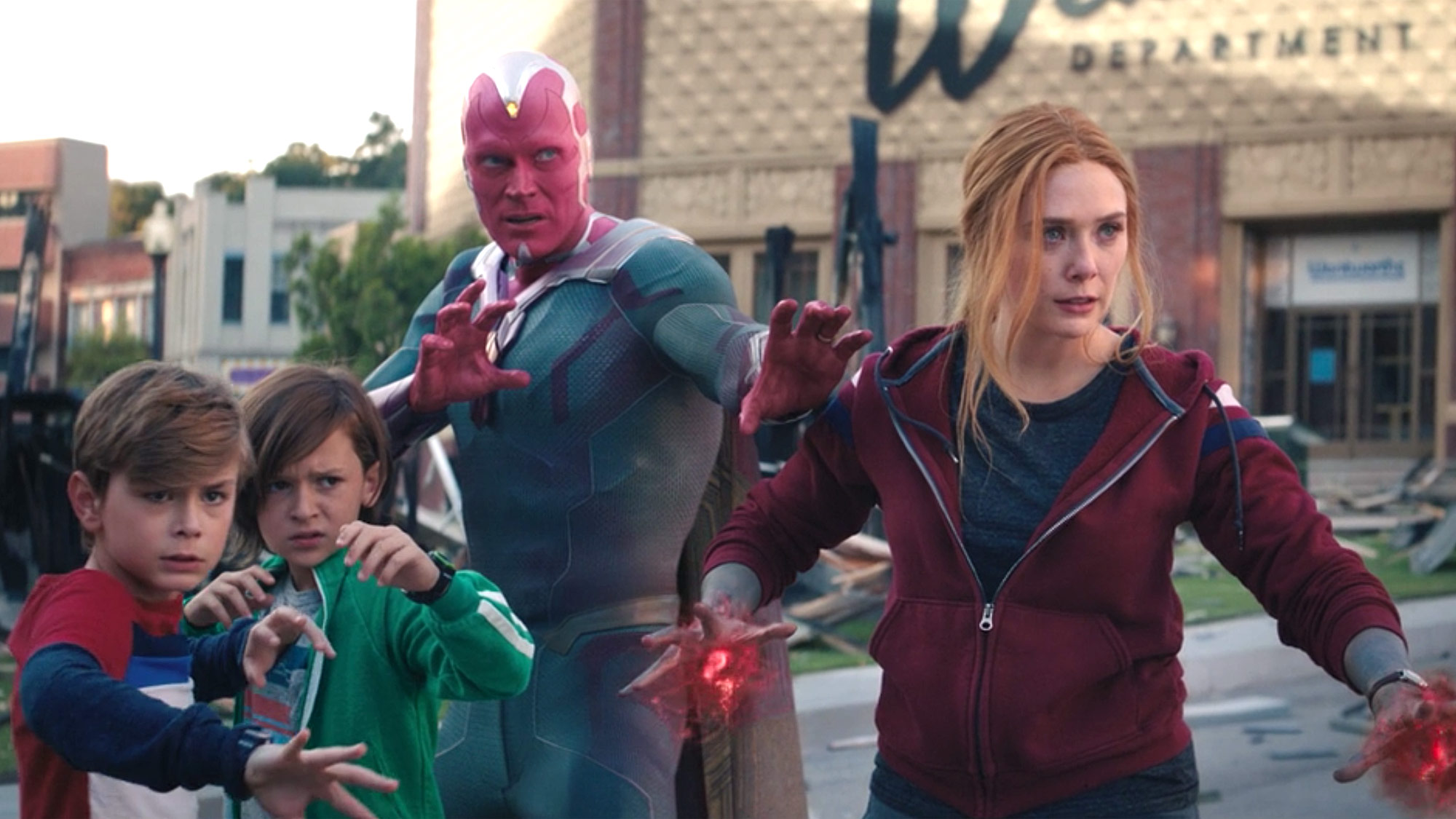 But what is the WandaVision finale, if not our questions persevering? WandaVision episode 9 concluded this chapter of the Marvel Cinematic Universe and resolved the sitcom-inspired Westview arc. It also put a bow on Wanda and Vision’s love story — for now.

Still, the WandaVision finale left us with quite a few unanswered questions. As the mid-credits and post-credits scenes hint, some of them may be answered in the next chapters, like Doctor Strange in the Multiverse of Madness and Captain Marvel 2 (and possibly future Disney Plus series). Others could be addressed in WandaVision season 2, if that was happening — which looks very unlikely.

1. Where did White Vision go?

Paul Bettany’s epic acting scene with himself ended up being a philosophical face-off, as Hex Vision confronted White Vision with the fact that both of them are “conditional” Visions. The scene ends with Hex Vision touching White Vision’s head and unlocking all his memories. White Vision declares he is the “real Vision” and then flies off … somewhere.

But White Vision still doesn’t bear the Mind Stone, so he’s not truly the same being as he was before. At least he seems to have discarded Tyler Hayward’s programming directive to be a sentient weapon.

Bettany has not been announced as part of the cast of Doctor Strange 2, though that doesn’t mean he won’t show up. After all, in the finale, Wanda says that a part of the Mind Stone lives inside her; it’s what created Hex Vision. Perhaps she could use that piece to transform White Vision into the one she knew and loved.

2. Will Agatha make a comeback?

During their big battle in the skies, Wanda (Elizabeth Olsen) turned the tables on Agatha and conjured runes on the wall of the Hex so that the older witch couldn’t perform magic. She then condemned Agatha to life in Westview as the nosy neighbor. And as Agatha herself explained, “Once a spell is cast, it can never be changed.”

But it seems a shame to introduce such an interesting villain (and a terrific actress in Kathryn Hahn) and never use her again. We have a feeling Agatha will make a reappearance somewhere down the MCU road, if not as early as the next Doctor Strange film. For one, Agatha herself name-checked the Sorcerer Supreme. And second, when she told Wanda,” You’re gonna need me,” the Scarlet Witch replied, “If I do, I know where to find you.”

And since the post-credits scene shows the Scarlet Witch busily reading the Darkhold, Wanda may need Agatha sooner than she thinks.

3. Will we see Billy and Tommy again?

Speaking of the post-credits scene, while the Scarlet Witch pages through the dark spellbook, the voices of Wanda and Vision’s twins, Billy and Tommy, are heard crying out for help.

Billy and Tommy disappeared, along with Vision, when Wanda took down the Hex. But it’s possible that they, too, are manifestations of the Mind Stone piece within Wanda — which means she can manifest them again in the future.

Another possibility is that the voices came through the Darkhold from a different dimension, somewhere else in the multiverse. Maybe there are other versions of Billy and Tommy out there and Wanda will seek them out. Which brings us to our next question …

4. Are the X-Men joining the MCU or what?

Well, it looks very much like Evan Peters was a bit of stunt casting as “Pietro Maximoff.” He turned out to be Ralph Bohner, a struggling actor whom Agatha co-opted to mess with Wanda. Maybe this was WandaVision’s showrunner, Jac Schaeffer, trolling fans, who’ve been theorizing for years about how and when the X-Men might be incorporated into the MCU.

Or maybe Peters’ casting was only partly a joke. It got people thinking about the possibilities of the multiverse, which is a central theme of the upcoming Doctor Strange movie. Maybe in this world, Peters is Ralph Boener and in another, he’s Peter Maximoff. The end credits scene featuring Billy and Tommy’s voices are another indication of alternate versions of characters. If Wanda goes looking for her twins in the multiverse, she may very well find Peters as her brother, again.

We could just be overthinking things. If a new rumor about an X-Men reboot called The Mutants is true, then Marvel may have other, further-down-the-road plans for incorporating the X-Men into the MCU.

5. Where is Monica going and who is she meeting?

In the mid-credits scene, a female FBI agent requested that Monica Rambeau (Teyonah Parris) check out the Westview movie theater. It turned out to be empty and the agent turned out to be a Skrull in disguise. Monica learned that a “friend of her mother’s” wanted to meet with her in space.

Most likely, the Skrull was referring to Nick Fury (she calls him the friend a “he,” so it’s not Carol Danvers). The last time we saw Fury in the MCU was in an end-credits scene from Spider-Man: Far From Home, which revealed that the Nick Fury and Maria Hill shown earlier in that film were actually Skrulls posing as the S.H.I.E.L.D. agents. The real Fury was on a spaceship with other Skrulls.

Monica’s meeting with Fury in space could set up a story for Parris in Captain Marvel 2, which is scheduled for 2022. Or it could lead into the upcoming Marvel Disney Plus series Secret Invasion, which likely adapts a comics storyline in which nefarious Skrulls infiltrate positions of power on Earth.

6. What’s the deal with the Darkhold?

The book in Agatha’s lair turned out to be the Darkhold, a dark magic spellbook that originates from the Hell Dimension (seen in the first Doctor Strange movie). And as Agatha explained in the finale, the Darkhold also foretold the arrival of the Scarlet Witch.

In the comics, the Darkhold is tied to some very powerful villains, such as the Elder God Chthon and Mephisto. The latter was the subject of many WandaVision theories, which didn’t turn out to be true. But that doesn’t mean those clues about Mephisto’s involvement weren’t put there for a reason.

The post-credits scene depicted Scarlet Witch studying the Darkhold. That could lead her to cross paths with Mephisto and also cross magical swords with Doctor Strange. The upcoming movie’s synopsis reads: “Dr Stephen Strange’s continuing research on the Time Stone is hindered by a friend-turned-enemy, resulting in Strange unleashing unspeakable evil.”

Looks like friend Wanda has turned into the enemy Scarlet Witch.

7. Is there a WandaVision season 2?

Yes, the finale episode was entitled The Series Finale, but MCU head honcho Kevin Feige was reluctant to shoot down a possible WandaVision season 2. Since the episode is so open-ended, we’re not ruling one out, either.