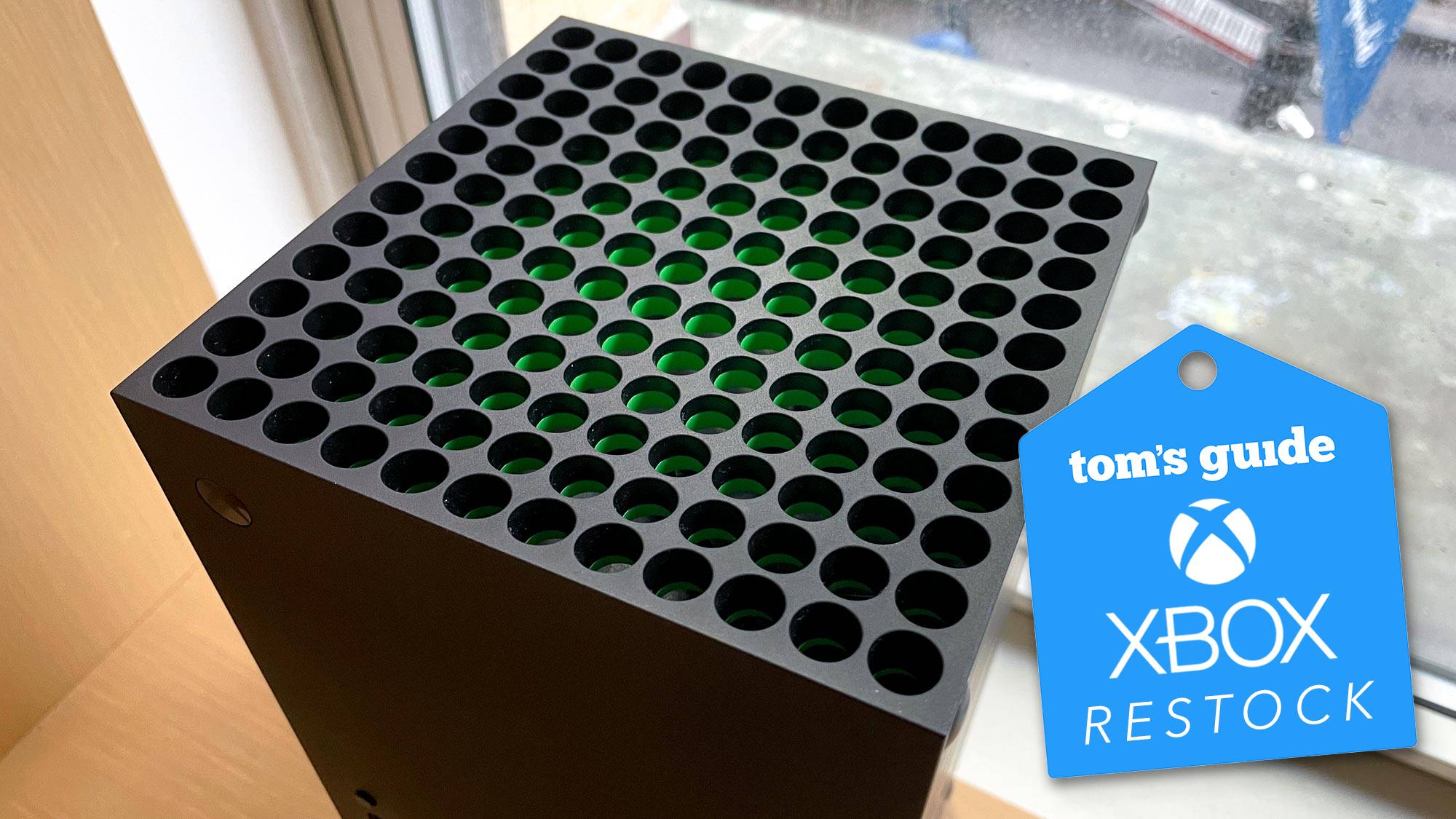 Xbox Series X restock is making a small comeback. Both Walmart and Best Buy offered Microsoft’s hard-to-find console earlier, but sold out within minutes. However, based on our Xbox Series X restock tracker, we have hopes that new Xbox stock will drop in the coming future.

So we’re here to help by tracking the latest Xbox Series X restock rumors, tips, and drops. We’ve also pulled together a list of U.S. retailers so you have a one-stop shop for finding where to buy the Xbox Series X and Series S.

Where to buy Xbox Series X: Restock links and updates

As of 7:50 a.m. ET on May 7, there is no Xbox Series X restock. Walmart had very limited restock Thursday afternoon, but sold out in seconds. Meanwhile, GameStop and Best Buy have Series S restock available now. Make sure to bookmark our Xbox Series X restock tracker below for the latest Xbox restock updates.

Xbox Series S: $299 @ Best Buy
Back in stock: The Xbox Series S is a less expensive and less powerful version of the Xbox Series X. The Series S has a GPU with up to 4 teraflops of output, 10GB of RAM, 512 GB SSD storage, and no disc drive. It has a max resolution of 1440p with 120 fps. View Deal

After a few weeks of very sparse restocks, the Xbox Series X has made a big comeback recently. Yesterday (May 6) saw a long-awaited Walmart restock with Best Buy following just hours later. Both retailers sold out in minutes though.

Last week was also a very strong week for Xbox Series X restocks as Costco and Microsoft’s own store both restocked the next-gen Xbox on Monday (May 3). We had been waiting for the latter in particular for several weeks, so it was a relief to finally see a restock from Microsoft itself.

There are no confirmed restocks for the remainder of this week, though Amazon looks like the most likely candidate as it’s due a restock after a surprise drop several weeks ago. If you desperately want a next-gen Xbox without delay, the Xbox Series S is currently proving to be the easier of the two to pick up and is available to buy at GameStop.

If you want to gain an edge on Xbox Series X restocks, check out these Twitter accounts for the latest updates. We especially recommend following Xbox Series X|S Stock Alerts and Wario64. The latter account tracks both Xbox restocks as well as general gaming sales.

While they won’t always give you a heads up, it’s also a good rule of thumb to follow retailers on Twitter, such as Best Buy and GameStop. Any edge you can get is crucial when trying to score an Xbox Series X restock.

There’s a good reason Microsoft’s new consoles are flying off shelves. In our Xbox Series X review, we gave the new system major props for its blistering performance, zippy load times and comprehensive backwards compatibility with every generation of Xbox. And as we noted in our Xbox Series S review, the cheaper next-gen Xbox still delivers many of the same great features for those with 1080p TVs.

With that in mind, see the latest Xbox Series X stock updates and tips for getting your new Microsoft console below.

We’ve included handy links to every notable store page below. In some instances, you may be able to sign up to be notified of the latest Xbox Series X restock.

Xbox Series X: $499 at Microsoft
You can get a Series X from Microsoft directly. As with other stores, we expect Microsoft’s stock to go quickly, so we recommend bookmarking this page. Microsoft does list other retailers that sell Xbox Series X, and gives restock updates.View Deal

Xbox Series S: $299 at Microsoft
The more affordable next-gen Xbox is also listed at Microsoft. This console is limited to 1440p output, but still promises fast loading, ray tracing and high frame rates. As with the Xbox Series X, you’ll need to check the page to see when the console is back in stock. View Deal

Xbox Series X: $499 @ Best Buy
Best Buy is one of many stores selling the Xbox Series X, though we expect it to go fast at the mega-retailer. Keep checking back for midnight Xbox Series X restocks at Best Buy — it’s probably the only way you’ll get one from here.View Deal

Xbox Series X: $499 @ GameStop
The Xbox Series X and Series S are both listed at GameStop, and the retailer also frequently offers its own bundles with games and accessories, so keep an eye out for those.View Deal

Xbox Series S: $299 at Target
The Xbox Series S is available at Target for $299. Keep an eye on this store page.
View Deal

Xbox Series X: $499 at Walmart
The Xbox Series X is being sold at Walmart, but stock is usually sold out. You can sign up for in-stock alerts, though.View Deal

Xbox Series S: $299 at Walmart
It’s the same story for the Xbox Series S. Current stocks of the console are gone, so you’ll need to wait for the new Xbox to be restocked.View Deal

Xbox Series X: $499 @ Lenovo
PC manufacturer Lenovo is also selling the Xbox Series X, and might be a good retailer to check off-hours. (Should they replenish stock). Currently, they have no stock of either console. View Deal

Xbox Series S: $299 @ Lenovo
Lenovo also offers the Series S, but like most others, is currently out of stock.View Deal

Xbox Series S: $299 @ Newegg
The Xbox Series S is on sale at Newegg, but there’s no stock available at the time of writing. View Deal

Where to buy Xbox Series X buying tips and resources

On Twitter, we suggest following @Wario64. The handle is known for updating users on the latest deals and restocks faster than anyone else on the platform.

Slickdeals, the online deal repository, has a forum thread dedicated to ordering an Xbox Series X through Microsoft. The thread is constantly being updated, so jump to the last page and click refresh for the latest intel on when units will become available.

PopFindr is a site that checks local retail inventories based on your zip code. For example, you can check local Target stores in your area to see if any Xbox Series X’s are available. Do note, that just because it shows in stock, it might be out of stock by the time you arrive at the store.

It’s also not a bad idea to make an account on Slickdeals and set a deal alert for “Xbox Series X.” You’ll get an email alert when a new thread is made about replenished stock. But we’ve found that sometimes Slickdeals doesn’t email users fast enough. So it might be better to type in “Xbox Series X” in the search bar and sort by new. Be willing to check in multiple times a day.

CheapAssGamer is a long-running video game deals website that too has a forum thread dedicated to the Xbox Series X. As of writing, the thread is over 63 pages long, and users are discussing where to find units.

Facebook too can be a good source of information. There are multiple Xbox Series X fan groups that keep users up to date on where the latest restocks are happening. Feel free to join a few of these groups.

And be sure to subscribe to the Xbox Series X subreddit. Sure, most of the page is dedicated to discussions and memes, but if a user notices a restock, they’ll let the community know. For example, one user found Xbox Series X units in stock at their local Walmart, with others too discussing similar finds. Again, it seems that some Walmart locations may be holding on to units to sell on Cyber Monday.

Another set of retailers to keep an eye on are subscription-based wholesalers like Costco, Sam’s Club, and BJ’s Wholesale Club. Because it requires a paid account to get access to these wholesalers, there are often fewer people jumping over each other to find a unit. If you don’t have a subscription to any of these retailers, ask a few friends or family members.

Unfortunately, wholesalers tend to bundle new consoles with either extra games or accessories. So you will likely have to pay more than the standard $500.

Generally, retailers like to make stock available at certain times. The time when new Xbox Series X stock is most likely to be made available is at midnight ET, on certain days. Check all the retailers and you just might get lucky.

Other retailers favor times like 7 a.m. ET, for when customers wake up, while others will aim at midday to give everyone the best chance of finding a new Xbox Series X console.

If the units are out of stock online, it might be worth going to a physical location. You must bring your membership card, or go with someone who has a membership. And be sure to wear a face mask (over your nose) or retail associates will ask you to leave. If none are available in store, then at least you can walk out with a $5 rotisserie chicken.

However, it’s possible to score Xbox Series X deals on games and accessories. Amazon frequently has Xbox controllers and accessories on sale, whereas Best Buy usually has  multiple games on sale.

One of the reasons for Xbox Series X and Series S stock shortages is due to scalpers snapping up large amounts of next-gen consoles in one big sweep and then selling them for extortionate prices; we’re taking thousands of dollars for a $499 games console.

VGC reported that a now infamous PS5 scalper group going by the name of CrepChiefNotify managed to snap up 1,000 Xbox Series X consoles as soon as they became available at U.K. retailer Very. But in a twist of fate, Very cancelled 1,000 Xbox Series X pre-orders, somewhat torpedoing the efforts of the scalpers.

As frustrating as it can be to find an Xbox Series X or Series S, we suggest you avoid buying a console from these scalpers. Paying massively over the odds for a console that doesn’t have a huge range of new Xbox Series X games isn’t a shrewd move in our opinion. If you can hold out, Microsoft should have more Xbox Series X units to ship, as well as the promise of more exclusive games for the console.