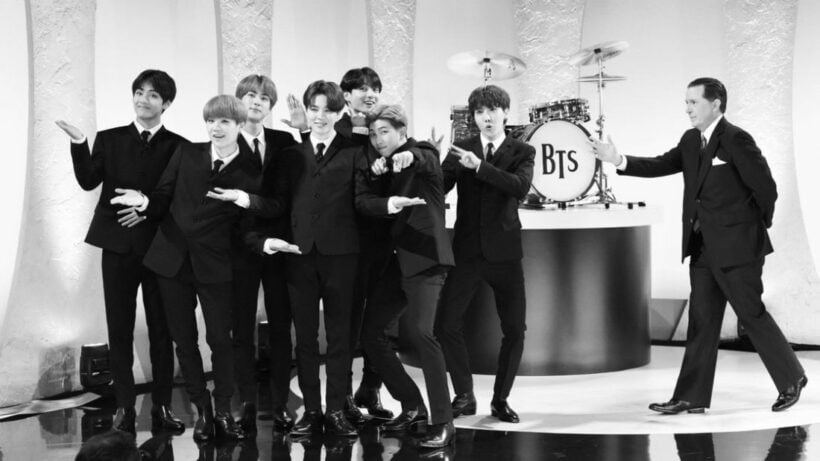 Simple answer, yes. But there are still people that have never heard of the group or might have been living under a rock for a few years. From their almost unnoticed debut as pimply hip-hop ‘try hards’ back in 2013, the 7 members are now basking in well-earned musical respect.

But there are still plenty of people asking “who the hell are BTS?” Well, they’re THE music group of the moment. Whilst there’s been Beatlemania, the stand-out genius of Michael Jackson, the charm of Elvis, the YouTube-discovery Justin Bieber and the half-century run of The Rolling Stones, there’s never been anything quite like the South Korean band BTS. Here’s why.

Whilst difficult to compare musically, statistically BTS are up there with the greatest bands of all time, and they’re still on the rise. By the way, BTS is short for their full Korean name Bangtan Sonyeondan (방탄소년단).

They sing mostly in Korean. Just consider that for a moment. They’ve crossed through the musical bamboo curtain to have #1 hits in the UK and the US (and plenty of other countries too). Indeed they’ve scored three number one albums in the US on the Billboard Top 200 Album chart, in one year – a feat only achieved once before by The Beatles, a situation that hasn’t been lost on the humble septet. BTS even sent themselves up, along with Stephen Colbert, on The Late Show performing in the same Ed Sullivan Theatre The Beatles debuted to a US TV audience back in 1964 – a pop culture moment that not only launched The Beatles to global stardom but changed music forever, proving that bands would have to be TV-friendly to succeed in the future.

For 2020 BTS have already sold the most albums of any artist in the world, when you include actual albums and digital downloads, beating out a host of huge US, UK and European artists. Map of the Soul – 7 is a reflective look back at their own careers, over 7 years, as a team of 7.

At their sellout concerts, the audience sings along with all their hits, in Korean. At their concert in Bangkok in 2019 I witnessed 50,000 (mostly) Thais singing along in Korean, whereas most Thais battle to speak much English, a language they’ve been partly taught at school. (By the way on one side of me at the concert was a 40-something husband and wife who had flown from Sydney to see the concert, on the other a mother and three kids (8 – 15ish) – I think the mother enjoyed it more than the kids.)

The group, comprised of Kim Tae-hyung (V), Jung Ho-seok (J-Hope), Kim Nam-joon (RM), Kim Seok-jin (Jin), Park Ji-min (Jimin), Jeon Jung-kook (Jungkook), and Min Yoon-gi (Suga), are hardly ‘overnight successes’. They debuted 7 years ago in the cut-throat K-Pop scene and they were hardly an instant success. Working with an almost unknown production company (Big Hit Entertainment), the 7 members started crafting their sound with long nights and weekends, living in the one dorm room, using their managers cars and homes as props and sets for music videos and fitting in their schooling as well. They contributed to the production and writing most of their material, and still do.

They battled a cruel K-Pop industry and haters that didn’t like that BTS didn’t fit the ‘mould’ of K-Pop. There were plagiarism controversies, death threats, social media hate campaign and just plenty of people who thought they’d go the way of most K-Pop acts, into obscurity. But they persisted and were relentless in their dream to make it big in South Korea and even dream to one day reach the shores of the lucrative US pop market. In November 2016 they won Album of the Year in the main music awards program in South Korea. They were utterly surprised but it was a turning moment and they would never turn back…

Eventually they clawed their way to a position of recognition in the K-Pop world, meanwhile garnering growing support in the west, well, everywhere around the world. Whilst it’s difficult to measure their success against other bands, there are a few important keys to their success which has music executives scratching their heads.

Their big weapon is their ARMY, the name they’ve given to their loyal fanbase around the world. Whenever the group speaks they ALWAYS attribute their success to the legion of loyal fans. ARMY have meanwhile weaponised social media – you could say that BTS came along at the right time – reaching beyond Korea’s borders in a way that had been impossible even ten years ago.

As #BlackLivesMatter trended in social media, as part of a larger protest movement in the US following the death of George Floyd, BTS made a $US 1 million donation to the movement. ARMY responded and within two days had matched the BTS donation from fans. They’re fans were also part of the K-Pop fans flooding of the #WhiteLivesMatter counter-movement, relating messages of hate with pictures of their favourite BTS photos or lyrics.

BTS’s YouTube music videos (there are hundreds) have broken several records on YouTube, their Twitter followers were the world’s most dedicated in 2018 and one member, J-Hope, had the most tweeted video in the world last year. BTS, through 7 years of sharing their lives, battles, dance practices, ups and downs, have weaponised social media.

Many of their videos are expensive, cinematic extravaganzas with hidden messages and ongoing story lines threaded between them. Blood, Sweat and Tears is 4 years old now but was a breakout video for the band and exemplified their command of music, story-telling, dance and style – all in one piece of art.

The band members shared the minutiae of their lives with thousands of uploaded photos and videos and also relentlessly shared their core message – that life isn’t always easy as a teenager and young adulthood, you need to love yourself before you can love someone else and your mistakes will make you stronger in the long-run. Their music isn’t all sugary sweet and often lapses into darker messages and addresses current social issues.

The difficult-to-measure ‘X’ factor is also strong in these seven talented guys. There is a genuine bond of friendship between the Bangtan boys and it shines through whenever they appear in public, or video – it’s not fake. And, after working their act for seven years, there’s a comfort and ease on the stage, some describe it as ‘swag’, where their performances appear effortless whilst pulling off breath-taking dance routines. As they’ve grown over 7 years their music and performance has also morphed from earlier hip-hop beats to more sophisticated performances.

Within their six years of ensemble work there are also generous sprinklings of solo projects, fully supported by the rest of the team. Whilst ‘doing a solo project’ from within a group is usually code for ‘I’m going solo’, with BTS it’s been a core part of the band’s raison d’être. At every BTS concer each member also have their solo moments to shine.

Another part of their strength is that they’re all remarkably talented – they sing, they dance, they rap, they write, they produce. They also have great ‘visuals’ (in K-Pop speak) presenting an all-Asian look to a white-washed western pop industry. There are no weak members along for an easy ride.

They keep collecting legions of adoring fans and celebrity fanboys and fangirls, have had two successful cinema releases of concert tour documentaries, have spoken at the UN, appeared on just about every important TV variety show around the world, and somehow stayed reasonably grounded along the way.

Their music, whilst often sung with Korean lyrics, is immediately catchy, has plenty of pop influences yet shines through with something unique that continues to set them apart and keeps amassing new fanbases around the world. In their concerts you’ll here pure pop, hip-hop, rap, power ballads and other songs that simply show-off their voices and powerful dance moves. That they keep it up, at full throttle, for their two and a half hour live concerts, is one of the modern wonders of the music world. 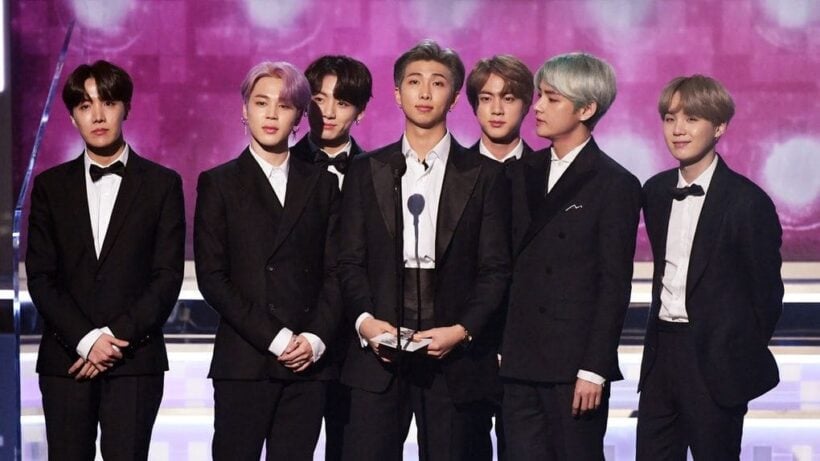 Yet, amongst the hype, the YouTube records, the sell-out concerts and music sales, are 7 young men who have allowed their true personalities to shine through.

RM is the group’s leader (the only member to speak fluent English) with an IQ of 148, V is the quirky one who’s often described as the band’s ‘secret weapon’, Jimin the ‘flirty’ one who shares his ‘up & down’ journey with fans, Jungkook the supernaturally talented youngest member (or ‘maknae’ in K-Pop speak). J-Hope is hyper-energetic and perennially cheerful, Suga is the brooding musician with the sharp tongue, and Jin the ‘world-wide handsome one’ (a self-mocking moniker he gave himself after the media attention to his looks over the years) who loves cooking for the band and telling dad-jokes.

There are thousands of videos on YouTube recording the band’s rise from very bottom of the K-Pop pile to international stardom. Whilst you can check out any number of their music videos or live performances (there are thousands of videos!) I would urge BTS-newbies to start with this address by leader RM (Kim Namjoon) at the United Nations in September 2018. It provides an insight into the intellect and feeling behind the pop sensation and a small part of what sets BTS apart from just about every other musician in the world today.

Whilst they are obviously riding high on a wave of fame right now, most music pundits think they’ve got plenty of room, musically, to extend their fandom and fame. Perhaps, even to become one of the greatest music bands of all time.

As a footnote, looming over BTS is the Korean government’s insistence that all it’s young men must enter two years of national army service by the time they reach the age of 28. The oldest member, Jin, is already 27 and the band members have already stated they are happy and proud to serve their time of conscription. In the meantime they’re not wasting any time as they continue to plunge head-long into a grilling schedule they’ve been keeping up now for seven years.