For this Valentine’s Day, Bang Khun Thian district in Bangkok has invited LGBTQ+ couples and people of all genders to sign the unofficial “marriage” certificate for the first time in Thailand. However, the district’s official Facebook page seems to have taken down the post advertising the event.

Under Thai law, marriage is only between a man and a woman. The event advertised by the Bang Khun Thian district is intended to emphasise gender diversity and equality in Thailand, inviting all couples to sign a certificate. It just won’t be official.

In Thailand, many couples flock to government offices on Valentine’s Day to register their marriages. One of the most popular district offices to tie the knot is the office in Bangkok’s Bang Rak, which translates to “district of love.”

According to the Thai media, the Bang Khun Thian district director’s director said the district wants people of all gender to be treated equally in society and proudly live their life, so they would like to invite those of every gender to join and sign a “marriage” document on Valentine’s Day. The famous Thai host, Woody, also posted on his Facebook page inviting people to join the event, but the post has since been taken down as well. 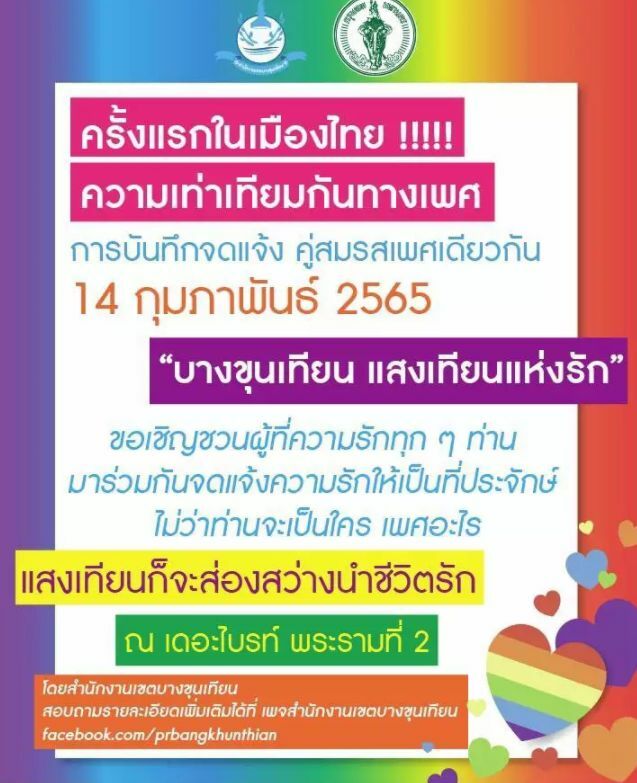