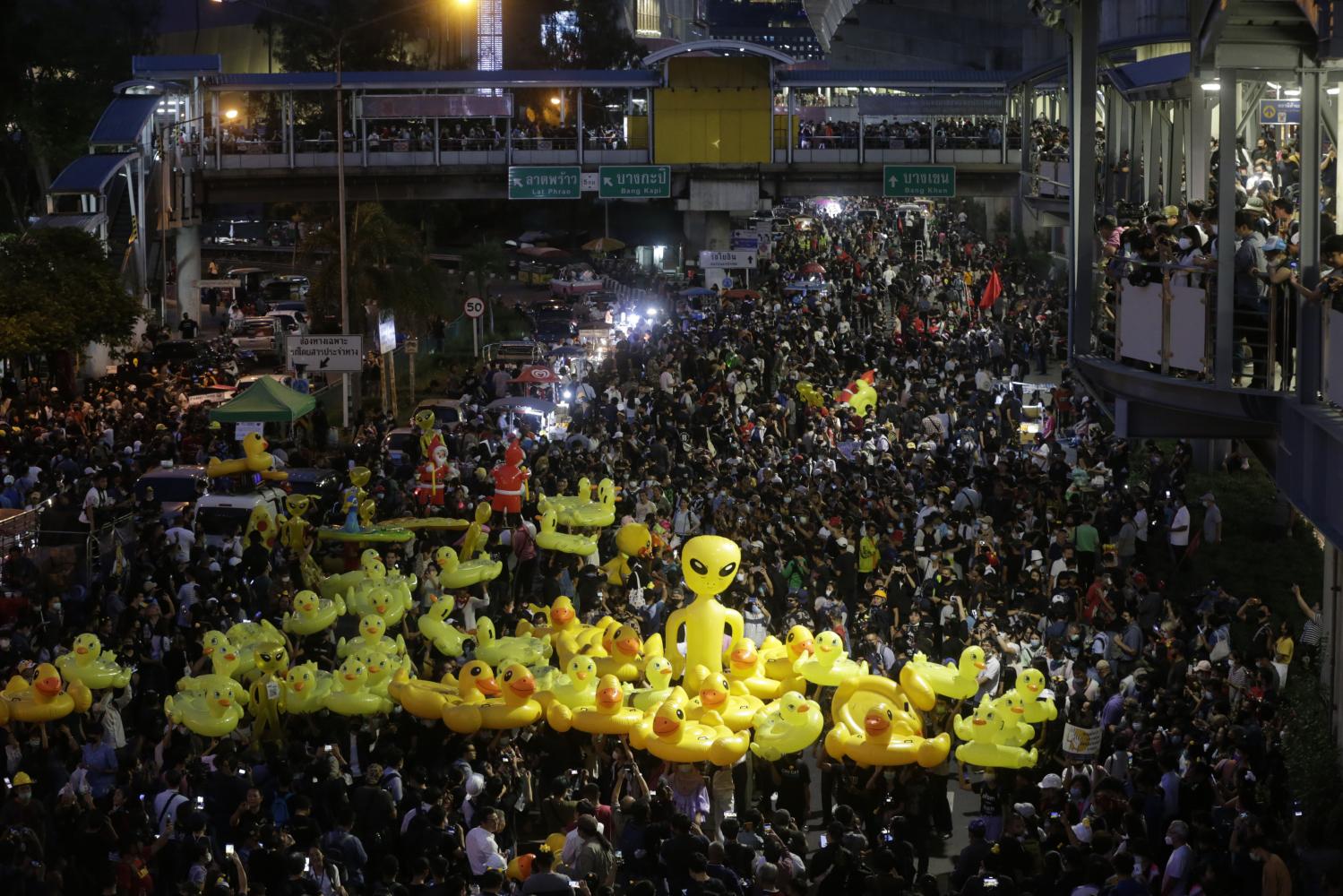 Cops gird for wave of rallies

Demonstrators converge at Lat Phrao intersection on Friday with inflatable yellow ducks which have become symbols of their protests. (Photo by Pornprom Satrabhaya)

Police have prepared to handle three consecutive days of anti-government protests in Bangkok and Samut Prakan, which kicked off on Friday.

The group had announced it will hold a demonstration on Saturday in front of the Imperial World Samrong shopping mall and march to Bang Na intersection, he said.

On Sunday, the protest group will hold another rally in front of the shopping mall, Pol Maj Gen Piya said, adding the protest leaders had not asked for permission to hold protests.

About 450 crowd control police officers will be assigned to maintain order during the rallies, he said.

The Foreign Ministry issued a statement in response to criticism by 13 international organisations over the government’s handling of the demonstration outside of parliament on Nov 17.

The 13 include Amnesty International, Human Rights Watch, the Asia Democracy Network, and the Asian Forum for Human Rights and Development.

Tanee Sangrat, the ministry’s spokesman, said Thailand has upheld the rule of law and respected the judicial process with transparency.

In handling recent protests, the authorities have enforced the law in line with international standards, with the appropriate response to the situation, Mr Tanee said.

He added that those who want to exercise their right to assemble must follow the law and consider the safety of others, noting doing so would comply with the International Covenant on Civil and Political Rights, which Thailand was fully committed to.

He said the protesters on Nov 17 broke through barricades and tried to reach an off-limits area, prompting the police to take action to bring the situation under control. The operation was proportional to the situation and was not excessive, Mr Tanee said.

The United Front of Thammasat and Demonstration protest group posted on Facebook that Friday’s rally at Lat Phrao intersection was intended as “an anti-coup drill”.

“Undeniably, speculation about a coup has been rife. It should not happen. But history teaches us that we cannot trust. Therefore, all are welcome for a drill to cope with another possible coup,” it said.

Meanwhile, protest leaders and rights lawyers are suing Prime Minister Prayut Chan-o-cha, Deputy Prime Minister Prawit Wongsuwon and others for 3.5 million baht in damages over the declaration of a severe state of emergency in Bangkok last month.