Search
ready for business: A woman cleans the front window of her traditional Thai massage shop in the Inthamara area of Bangkok as the business reopens.

To curb the Covid-19 pandemic, massage parlours and gyms were among the first businesses and premises to be ordered closed. Facing the impact of two waves of the coronavirus, business owners and employees said they were more concerned about making ends meet than the disease itself.

But since the Bangkok Metropolitan Administration (BMA) allowed these businesses to reopen last Friday, some worry that regaining customers after the closures will not be easy.

After the new wave of Covid-19 sparked in mid-December, the BMA announced on Jan 2 the closure of 25 businesses and venues including fitness centres and sports clubs as well as spas and Thai traditional massage shops.

Since Friday, 13 businesses including fitness centres and massage parlours have been allowed to reopen, on condition that they observe strict health measures such as wearing face masks at all times and keeping exercise machines at least two metres apart.

In the meantime, business owners have yet to pull in big customer numbers and are struggling to pay their bills.

Ekarat Techasan, 39, the owner of “Sabaidee Foot Massage” at Seacon Square Srinakarin said his shop follows all the guidelines, with alcohol gel provided, partitions dividing each massage seat, and masseurs wearing surgical masks and face shields to ensure customer safety from the disease. 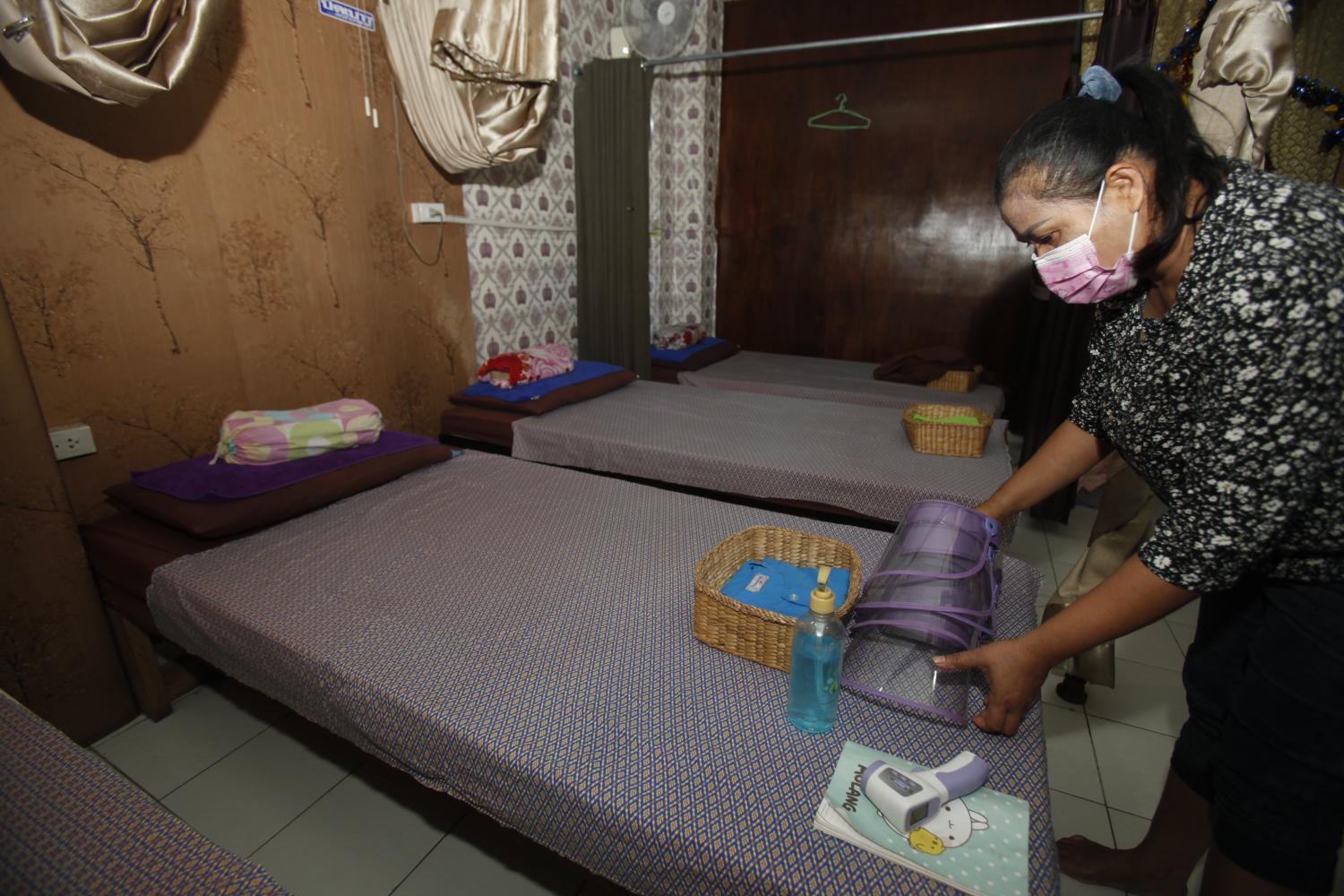 “Customers still decreased dramatically. They are afraid of infection because massage involves touching body parts. So I have to ensure they are safe, otherwise they will leave again,” he said, noting that another reason keeping customers away is their financial situation.

His backup is his parents’ business.

Asked what he thought about the government’s handling of the pandemic, he said he lacked confidence in the measures.

“I think it is better for us to help each other, rather than waiting for their assistance,” Mr Ekarat said.

His employee Rungrat Artpen, 44, said she was unemployed right after the closure. “It is really hard for me to start over again because I am old,” the masseur said.

“I have been working here for 12 years and I feel comfortable with this job. I turn 45 this year. Finding a new job at this age is too hard, and I would not dare to work as a home masseur. The customers and I are both afraid of being infected.”

Masseurs are normally paid according to the number of customers they service and the hours they work. Ms Rungrat used to earn 500-600 baht a day, but when the second wave came, everything changed.

“When the number of cases rose, I gained only a few [customers]. Sometimes I made only 100 baht a day”.

Fortunately, Mr Ekarat was able to support her along with her son back in her hometown, Phetchabun. Amid the new pandemic wave, she said she felt less scared because of the experience from the first wave. She had learnt to adjust and save money as much as possible.

“Now I stay at home and try to be as frugal as possible.”

Nevertheless, she said the government’s support has not been inclusive enough.

“Not everyone has access to mobile phones,” she said, adding that subsidies given to state welfare card holders as well as the “Khon La Khrueng” scheme, with funds transferred via the Pao Tang app, are too meagre to survive on.

Apinan Sittichai, 42, owner of @Pinklao the Infinity massage shop said having to close the shop was scarier than the pandemic.

“I was not afraid of the second wave since I know what the virus is like and the mortality rate is relatively low. I was surprised to have to close the doors again and I cannot believe the spread was uncontrollable,” he said.

Besides ensuring a clean and safe environment, he is devising ways to promote his business to regain his customers.

“I tried many ways to attract them back. Even though only a few have come back, at least it is better than doing nothing at all,” he said, adding it was already difficult to attract customers after re-opening in the first round.

“This is the only business I have,” he said, adding he remained sceptical about closure measures.

“I do not understand why certain businesses are allowed to operate, even though they are packed with people. What are the criteria and justification?

“They should realise that, from the closures, they may stop the disease, but not our debts. It is better for them to reconsider what they are doing regarding how to prevent citizens from starving while controlling the pandemic.”

Mr Apinan supported his staff by allowing them to stay at his massage place.

“My apartment owner has not cut his rent since they are not affected by this second wave. I decided to stay here to save costs, otherwise I need to go back home in Phitsanulok,” one of Mr Apinan’s employees said. 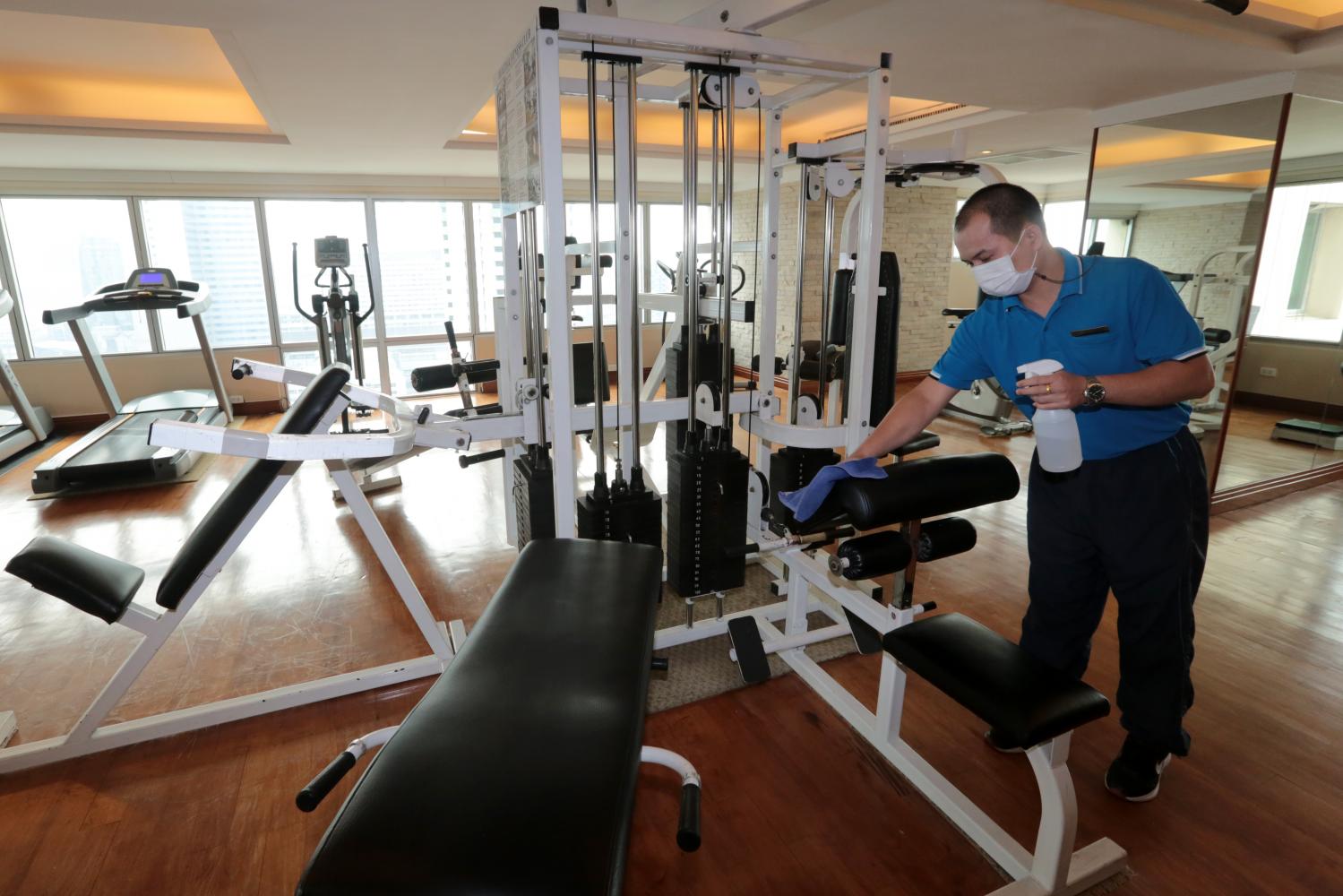 READY FOR ACTION: A worker cleans equipment with disinfectant at a fitness centre.

“I would rather be infected with Covid. At least, there was government support for treatment costs and I would not starve,” he said, adding that he was not confident in the government’s pandemic control measures.

In fact, he believed the government was using the pandemic “as a political tool to delay anti-government protests”.

Another 30-year-old masseur, who asked not to be named, revealed he was forced to flee to his girlfriend’s home in Laos to save living costs during the first pandemic wave.

But this time he needed to stay here since all borders have been closed. He would need to risk to be infected by being an at-home masseur to survive while being careful not to get infected.

“I will try my best not to enter the red zone,” he said.

Meanwhile, owner of Trio Fitness on Phutthamonthon Sai 3 Road, Anupong Wayo, 32, and his shareholder and trainer, Jetsada Arunwichit, 27, experienced both first and second gym closures announced by the government.

“After the first wave, even though I tried to ensure the cleanliness of the gym by following the government regulations, many customers had gone because they are afraid of the virus. I lost around 50% of my customers,” he said.

“Now my business has 60%-70% recovered but if I have to close it again and I think it would be worse.”

He turned to online training, as well as selling orange juice as a second job.

“I have fixed costs to pay monthly. So, I need to do anything that I can to get money easily”, he said. Regarding his feeling toward the second pandemic, he had no fear of the virus itself, saying fear would only reduce people’s immunity.

“It is better to find a way to live with it,” he said.

“I’m more concerned with how I can make my business stay alive during this crisis, even though I have already cut unnecessary expenses.”

He opposes attempts to curb the pandemic by closing businesses and premises.

“It is impossible to have zero cases,” he said.

“They should find the way to live with it. But first and foremost, they should realise that closing businesses will not help anything, but rather affect the people and the entire economy system as a whole.”

He also suggested the government should find ways to reduce the cost of living such as reducing property taxes which would not only help landlords, but also help people who need to pay the rent during the pandemic.