Labanoon lead singer and guitarist Metee Arun has entered politics by joining the Democrat Party as a candidate for Narathiwat in a decision that has put the future of the popular rock band in doubt among its fans.

Democrat leader Jurin Laksanawisit on Friday introduced the rocker as a new candidate to contest in the southern border province, alongside Che-aming Totayong, a former MP for Pattani who has returned to the party from the Action Coalition for Thailand Party.

Mr Jurin said during the event in Sungai Kolok district of Narathiwat that the two candidates symbolised the party’s policy to draw new blood and lure back old hands who had defected to other parties.

The introduction of the Labanoon leader came one day after the trio unveiled their official music video Tha Phayu (Challenging the Storm) on their Facebook page, following the release of the audio version in July.

Followers posted messages on social media platforms asking whether this marked the end of the band in light of their leader’s decision to enter politics. Some even showed disappointment at his move to the Democrats. 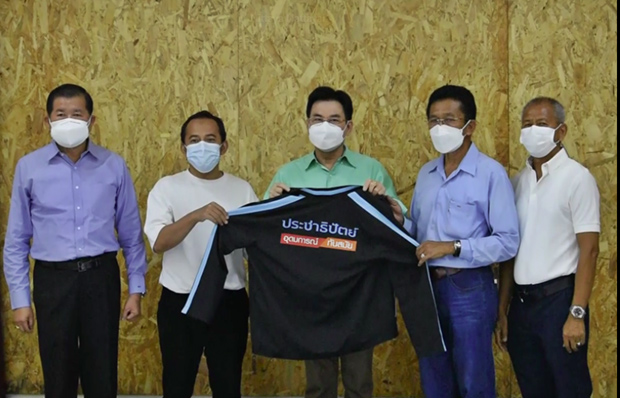 “It’s over for me, the band that I was a fan of since the 1990s,” one person wrote on the band’s Facebook page. “I’m a fan of Labanoon but you disappoint me,” another wrote.

There were some followers who vowed to stay with the band. “Whatever party, I don’t care. I’m still a fan of Khun Metee,” one said.

Mr Metee did not discuss his musical future on his social media accounts open to those registered by the band.

But he said during the introductory ceremony that his decision to run for an MP seat was driven by his admiration and trust in the country’s oldest party, with confidence that Mr Jurin was suitable for the premiership.

Narathiwat is the singer’s home province.

Mr Meet formed the three-member Labanoon in 1998 as a guitarist and lead singer, and took a break to be a law lecturer at Hatyai University in 2006 before returning to music again.