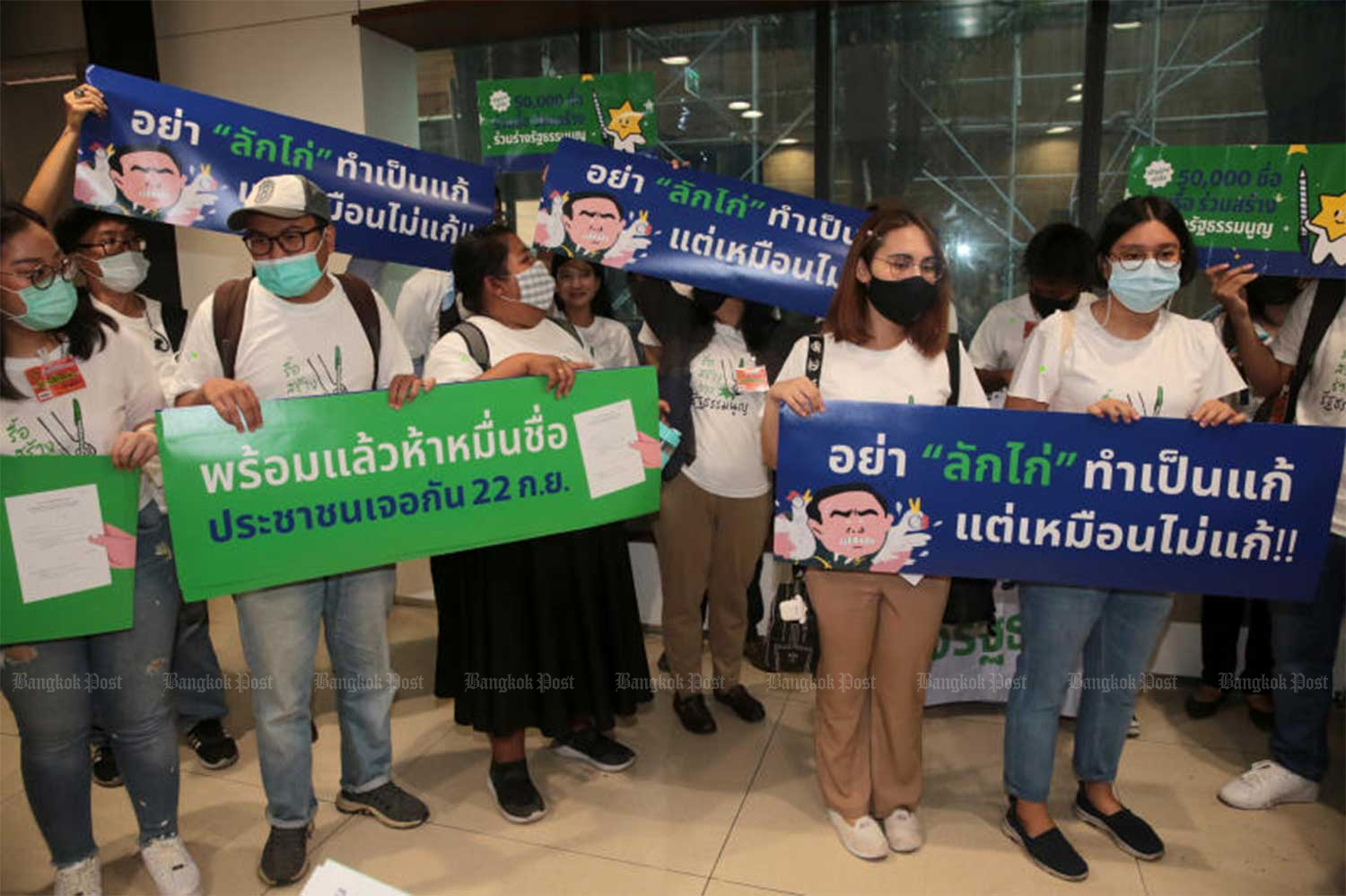 Activists iLaw gather at Parliament on Sept 16 to serve notice that the group has already gathered the 50,000 signatures required to support its version of a bill to draft a new constitution. It will be formally submitted on Tuesday. (Photo by Chanat Katanyu)

The Internet Dialogue on Law Reform (iLaw) says it will formally present a people’s version of a bill to draft a new constitution to Parliament on Tuesday.

The group on Saturday took its sign-up campaign to the Phra Mae Thoranee statue near the Tha Prachan campus of Thammasat University, where people were gathering for the largest anti-government demonstration the country has seen in a decade.

As of Saturday evening the group said it had gathered about 90,000 signatures, well above the 50,000 required for citizens to submit a bill to Parliament.

Its version of the bill envisages the entire country as the constituency for the election of constitution drafters, unlike the versions of the coalition parties or the opposition, which want the provinces as constituencies. The latter approach is seen as making voters vulnerable to the influence of local politicians and their networks.

Yingcheep Atchanont, an iLaw representative, said the group was not worried about how many people would back its campaign, although the more people sign, the better.

“The number is significant, but we are not sure how the issue will be debated in Parliament,” he said.

Section 256 of the constitution allows the submission of a draft amendment supported by at least 50,000 people for consideration by parliament.

iLaw is considering holding a series of forums to show the public why the 2017 charter — drafted at the behest of the military junta and approved in a referendum where dissent was suppressed — must be rewritten, Mr Yingcheep said.

iLaw has billed its version of the charter rewrite as a “public draft”, and demanded that it be deliberated alongside other drafts proposed by political parties.

The drafts put forward by the opposition and government drafts will be debated on Wednesday and Thursday. The current parliamentary session is scheduled to end on Friday.

Somkid Chuakong, a Pheu Thai MP for Ubon Ratchathani, said the Senate remains tight-lipped about its stand, but he believes recent student rallies calling for a new charter will be a factor in its decision.

Any amendment to the constitution must go through three House readings and requires a majority vote with the endorsement of at least one-third of senators, or 84, to be passed.

According to Mr Somkid, the opposition, the government and the Senate have been given eight hours each to make their case in the two-day debate.