Phang Nga, a province in southern Thailand that borders Phuket, is known to have Thailand’s most beautiful viewpoints. You can get there by boat, car, bicycle, luxury yacht, longtail boat, kayak, or even junk (a Chinese sailboat). Whether the weather is sunny, gloomy, or rainy, Phang Nga is still a great place to visit for anyone looking for time away from the city.

The bay is around 20 kilometres north of Phuket Island and 40 kilometres from Phuket’s local piers. Although Phang Nha is not as hyped as Phuket, there are a great number of visitors each year. Not only can you enjoy the beautiful bay, but the province also offers a number of additional attractions that make it well worth your time when visiting Southern Thailand. We have compiled a list of the top 5 famous viewpoints you can visit while you are in Phang Nga.

Samet Nangshe Viewpoint is one of the most popular viewpoints in Thailand. Phang Nga Bay and its hundreds of beautiful limestone structures and small islands can be seen from Samet Nangshe Viewpoint, which offers a stunning 180-degree view. After a 10-20 minute short trek up the hill, you will arrive at the Viewpoint. The panorama is so large that a single photograph will not do justice.

Photographers from all over the world travel to Samet Nangshe Viewpoint to capture the perfect shot of the stunning sunrises. Even at night, the views are breathtaking, and due to the lack of light pollution, the night sky and many constellations are visible. It gets chilly at night, so bring a light jacket or sweater, as well as a lamp and mosquitoes spray. 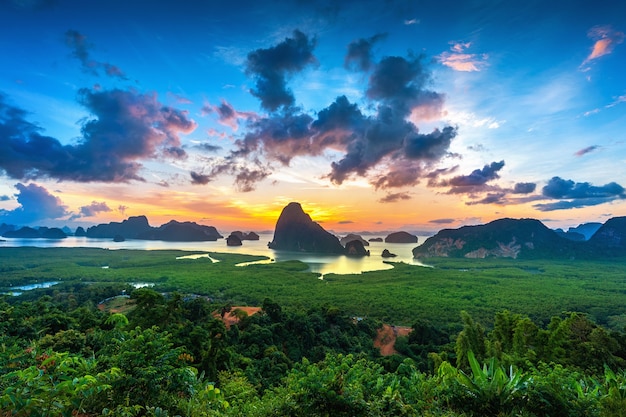 This island remains a major place to visit in the area more than four decades after the James Bond film. James Bond Island was originally known as Koh Tapu. The island’s major attraction is now the standing rock just offshore. You won’t be able to see it from where you land; instead, you’ll have to scramble up and down some stone steps to catch a glimpse of Thailand’s most iconic rock. When you look towards the limestone cliffs from a distance, the views are breathtaking!

According to a scientific interpretation of the Khao Ta Pu formation, the area was formerly a barrier reef during the Permian epoch. Then, because of geological movements, it fractured, scattering its components across the region and being flooded by the rising sea. Wind, ocean currents, and corrosion eventually destroyed the islands that resulted, resulting in odd formations like Khao Ta Pu.

This island is included in almost all island-hopping packages in the vicinity. Tourists can visit the site via canoe or longtail boat, which can also take them to other surrounding islands.

Khao Kai Nui Viewpoint is a majestic viewpoint recommended for its purest skies and mesmerizing mist. This viewpoint is 200 metres above sea level and you get amazing views of clouds, greenery, complex mountains and a panoramic view of the Andaman Sea. To get there, you will have to drive up the steep hill that narrows down into a dirt road. If there had been some rain, a 4WD vehicle is recommended.

Khao Kai Nui Viewpoint is one of Phang Nga’s most peculiar viewpoints, and just a few people are aware of it. Consider yourself fortunate if you have the opportunity to witness this vista, which is regarded as one of Thailand’s hidden gems. Coming here early in the morning to see the sunrise is very worthwhile.

This viewpoint is so peaceful and you can rent a tent for 250 baht, but you’ll need to bring your own blanket. 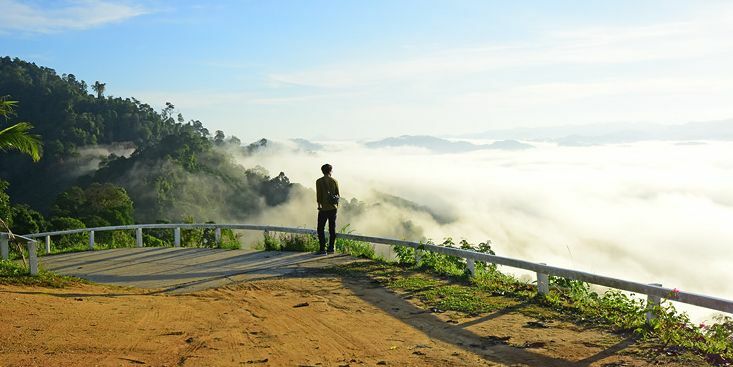 Khao Nang Hong Viewpoint is located in the Muang district of Phang Nga. It might be a bit far away from other attractions in Phang Nga, but it’s a nice viewpoint to visit, especially if you enjoy driving.

You’ll have to drive through a picturesque winding road surrounded by limestone mountains and lush tropical jungles to get to the viewpoint. Although the road is pretty, be careful when driving to the top as it’s super steep and narrow. Once you arrive at the viewpoint, you’ll get to see breathtaking views of verdant jungle canopies and dramatic tree-covered limestone peaks that jut up towards the skies. The viewpoint itself is usually very quiet, almost deserted, so you may be able to enjoy the view all to yourself. 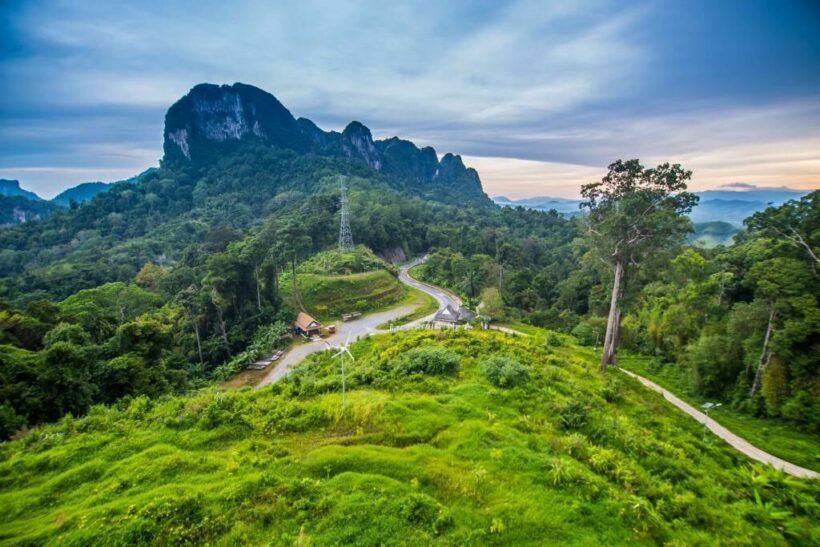 The most fascinating thing about this island is that its landscape with its granite rock formations was formed 250 million years ago. It was formed during the Paleozoic epoch which was even before the dinosaurs.

There is a viewpoint called Donald Duck Bay at Similan Island that you must visit! This photogenic bay s located at the Northern end of Similan Island. It has a beautiful beach as well as a unique rock formation that is quite easy to climb. This island is called Donald Duck bay because the oddly shaped rock on the bay’s western shore resembles the cartoon character Donald Duck’s head. From the top, you can get a stunning panaromic view of the surrounding islands and the turquoise coloured ocean.

Aside from that, Donald Duck bay provides a good natural shelter for liveaboard boats, and many of them moor here. Because of its well-protected harbour and simple conditions, it’s also a favourite night dive spot. Its shallow depth and little currents make it ideal for diver training. 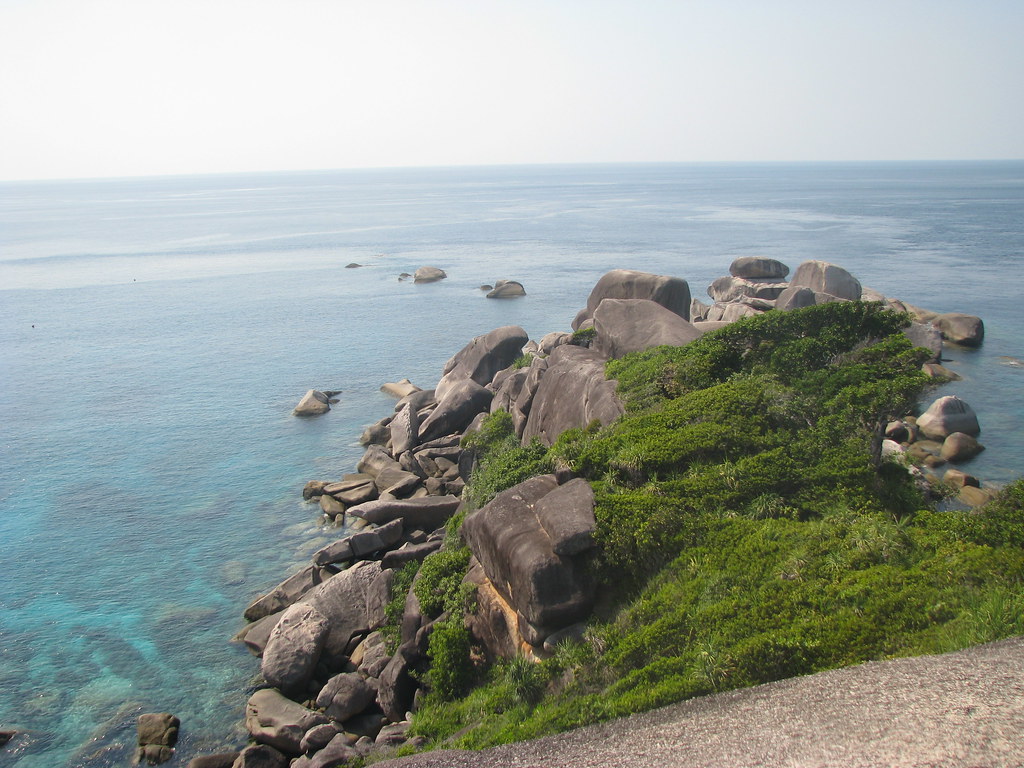 Phang Nga has stunning limestone cliffs, countless caverns, archaeological artefacts, and collapsed cave systems. Sea levels were so low ten thousand years ago that you could walk from Phuket to Kabi. Today, Phang Nga has a plethora of natural treasures to discover, beaches to relax on, and a variety of activities to satisfy one’s adventurous side. To make your trip to Phang Nga worthwhile, make sure you visit some of these beautiful viewpoints! Check out our list of top hotels in the local area, HERE.

Get more from The Thaiger