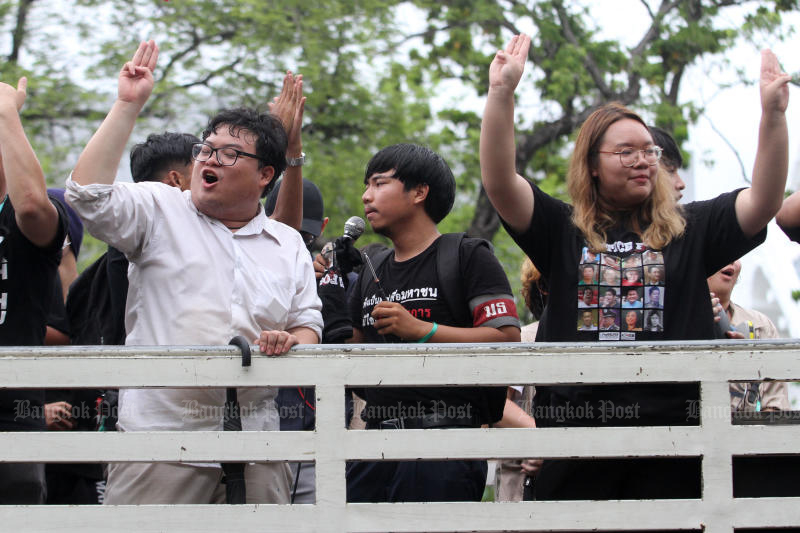 Authorities press for plaque to be removed

Student leaders Parit Chiwarak (left) and Panusaya Sithijirawattanakul (right) give the three-fingered salute to protesters on a lorry before the end of the rally on Sunday. (Photo by Wichan Charoenkiatpakul)

Police are considering multiple charge against pro-democracy leaders after the two-day rally at Sanam Luang that culminated in the delivery of demands for reforms and the installation of a new plaque.

Deputy Metropolitan Police Bureau (MPB) commissioner Piya Tawichai on Sunday said the protest leaders could face charges on three counts from the demonstration that started at Thammasat University and moved to the Sanam Luang ground.

He said they breached the Public Assembly Act by relocating the rally site from the university to Sanam Luang without permission from authorities, stayed at Sanam Luang beyond the closing time and illegally installed an object in the ground.

Police said on Saturday that the protesters could also be charged for breaking into the university’s main campus and damaging its property, but authorities could not pursue that until the university registered a complaint.

Sanam Luang falls under the responsibility of the Bangkok Metropolitan Administration (BMA).

Pol Maj Gen Piya said police will ask City Hall whether they would take action against the leading protesters.

About 40 officers are studying recordings off all the speakers who appeared on the stage to look for evidence that could lead to further charges against them, he added.

The protest ended on Sunday morning after the student leaders installed a new plaque declaring the people’s power at Sanam Luang and handed over a petition to the Privy Council president through MPB chief Pol Lt Gen Pakapong Pongpetra outside the Supreme Court.

City Hall workers are checking for damage at Sanam Luang.and cleaning the area before reopening it to the public.

BMA deputy governor Sophon Pisutthipong said the authority was assessing the damage and considering charges against the protesters.

Although he did not clarify what would happen to the plaque, police are pressing City Hall to take it out of the ground. The BMA should remove any objects that were not part of Sanam Luang, Pol Maj Gen Piya said.

Police are removing barricades put up on roads and canals leading to Government House and will reopen the streets to motorists by Sunday evening.