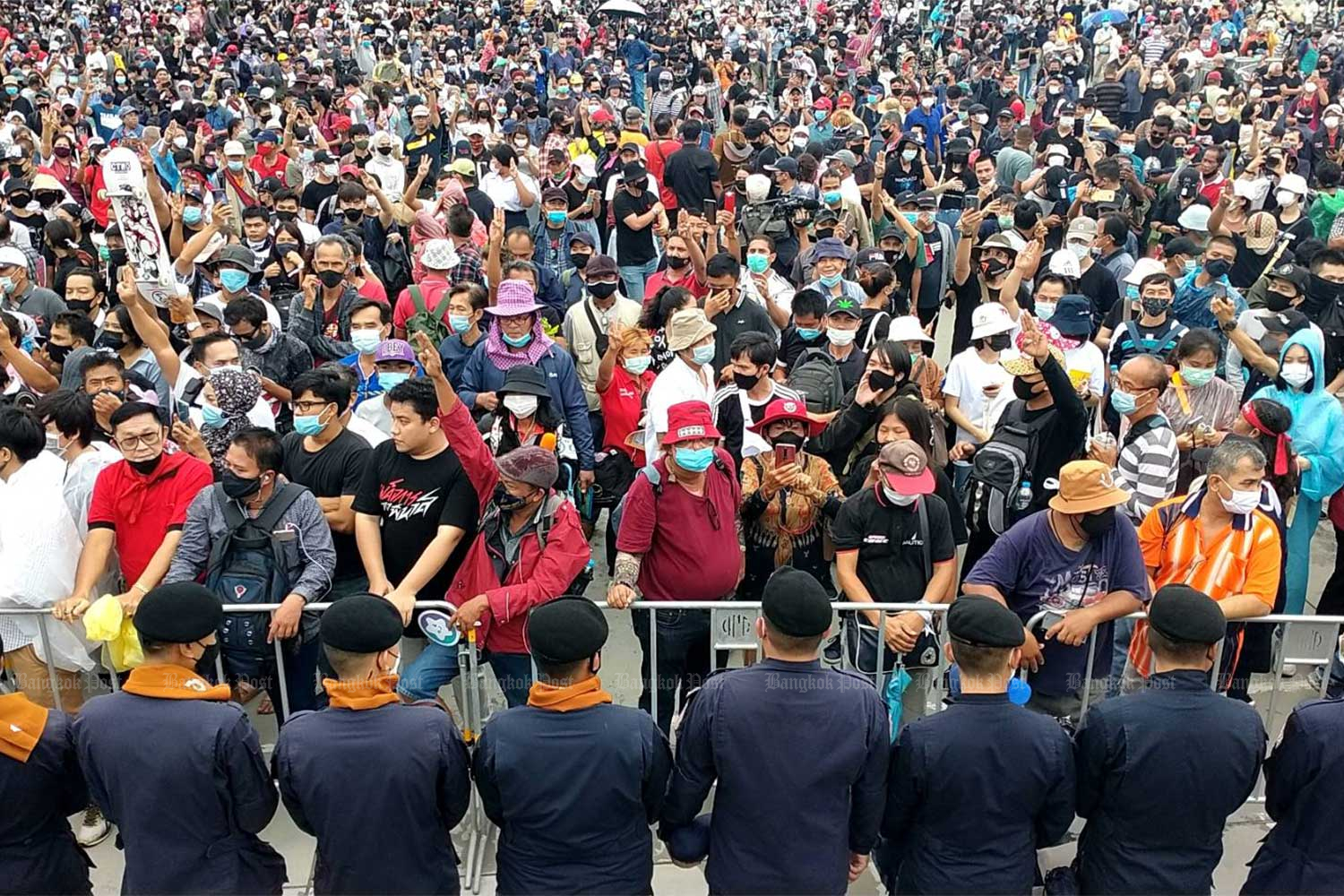 Thousands of protesters have gathered in the rain at the Tha Prachan campus of Thammasat University in Bangkok for what they say will be a two-day protest to press for a new constitution and an end to military-dominated government.

The mostly young demonstrators have also vowed to press for reform of the monarchy, an issue that has provoked strong reactions from more conservative segments of society.

However, an increasing number of seasoned protest veterans from the red-shirt United Front for Democracy against Dictatorship (UDD), after keeping a low profile for the past few years, have decided it’s time to throw their support behind the movement. This story will be updated regularly and readers can also follow live feeds on Facebook and Twitter.

5pm: Police fence off the grass at Sanam Luang and say demonstrators can use only the paved area of the site, where the stage has been set up, but the crowd continues to swell, breaking down the barriers and moving onto the grass where they settle in for a long night.

Police set up a new barrier across the grass closer to the Grand Palace. The Public Assembly Act forbids gathering within 150 metres from the compound of the Grand Palace and palaces of Royal Family members. Three large water trucks have been stationed behind the new barrier.

The latest police estimate of the crowd is 5,000 but many more are expected to arrive as the night goes on, with the main speeches not expected to start until around 9pm.

3.40pm: More demonstrators move from Thammasat University to Sanam Luang, in defiance of police warnings that the “royal ground” is off-limits. Police also warn that entry within a 50-metre radius of the Supreme Court is prohibited.

“Sanam Laung in the past was a public space used by the people. Occupying it is seizing it back,” the rally organisers said in an earlier statement.

Ratchadamnoen Klang Avenue might also be closed for art exhibitions and other activities. The road name will be changed to “Rassadon Avenue”, they said.

Organisers say the rally will continue overnight. At 8am on Sunday, an anti-dictatorship march will begin — but not to Government House as planned earlier, and where security officials had concentrated many of their resources to protect the site.

“We had said we would march to Government House. But now whoever is waiting there can go home,” the organisers’ statement said. “As to where we’ll go, we’ll announce on that day.”

3pm: About 1,000 people begin to move into Sanam Luang, along with a truck carrying equipment to set up a large rally stage. Police ask demonstrators to end the rally at Sanam Luang within one hour, citing a breach of the Public Assembly Act as organisers did not inform officers about the activity 24 hours in advance.

As Pol Col Vorasak Pisitthabannakorn, chief of the Chana Songkhram station, reads the announcement, some demonstrators try to disconnect his microphone cord. Others face off opposite anti-riot police and flash three-finger salutes. Police have to open the gates to let the demonstrators in

Noon: The crowd’s anger grows as the university gates remain locked. Some attempt to climb over the fence to get inside. Protest leaders Panusaya “Rung” Sithijirawattanakul and Panupong “Mike Rayong” Jadnok calm the crowd and negotiate with university staff, who finally agree to open the gates to allow the crowds in.

10.40am: Panupong arrives at the venue, saying he wants to observe the situation and see how many people joined the rally. He says he never thought Thammasat would close its gates given its historical reputation for supporting free expression.

He says what worries him most is the possibility that “third hands” might instigate unrest during the rally, something that has happened on numerous politically charged occasions in the past, including in 2006 and 2010.

He insists the rally will be peaceful and is being staged to press three demands: dissolution of the House, a rewrite of the constitution and an end to harassment of those critical of the government.

10.30am: Activists from the so-called Free Isan Movement based in Maha Sarakham arrive at Sanam Luang with a truck equipped with loudspeaker. Some take turns to criticise the government.

Other red-shirt members from the North and Northeast continue to flock to the venue. Some carry placards reading “Red-shirt people stand by young people”. Artwork from several universities featuring anti-dictatorship messages is displayed along the fences of Thammasat University at the Sanam Luang side.

10.20am: Demonstrators arriving in large numbers on the Sanam Luang side. All had to pass through a weapons screening checkpoint.

10.10am: Officers from Provincial Police Region 2 stationed at the Tha Prachan entrance gate to the university.

A group of red-shirt protesters is spotted carrying a large banner bearing a picture of Maj Khattiya “Seh Ice” Sawasdipol, who was killed by a sniper at the height of the UDD protests in 2010.

10am: Khlong Luang police seize 50,000 copies of a booklet on reforming the monarchy from a house near the Rangsit campus of Thammasat University in Pathum Thani. They are believed to have been prepared tp be distributed at the protest. A number of students follow to the police station.

9am: Demonstrators begin streaming toward the campus where all gates are still locked. University administrators had earlier forbidden the use of the campus for the rally, saying protest leaders had not agreed to requests to curb some of their more controversial demands.

Wearing black T-shirts, face masks, raincoats and carrying umbrellas, school and university students and members of the public walk along Ratchadamnoen Avenue to the area in front of the university on Phra That Road in pouring rain.

Tents are set up in front of the campus from Gate 1 to Gate 2 with drinking water available.

At Lan Tha Prachan, health workers set up checkpoints to take the temperature of people attending the rally.

All told, 57 companies of police, or about 8,500 officers, have been deployed at 14 locations. Their number includes border patrol police from Chai Nat province and anti-riot officers from Nakhon Pathom. 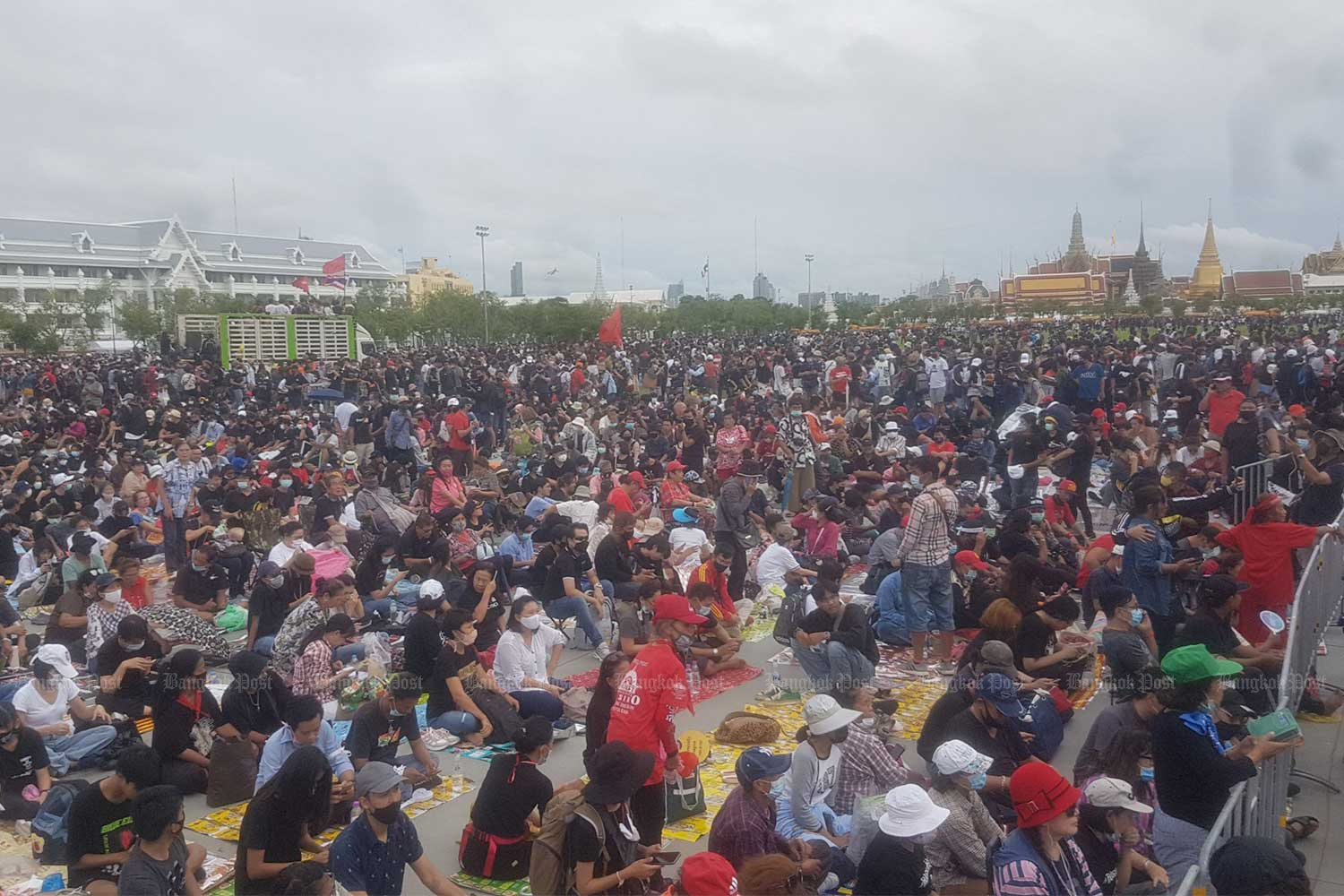 Demonstrators settle in on Saturday afternoon for what is expected to be a long night at Sanam Luang. (Photo by Apichart Jinakul) 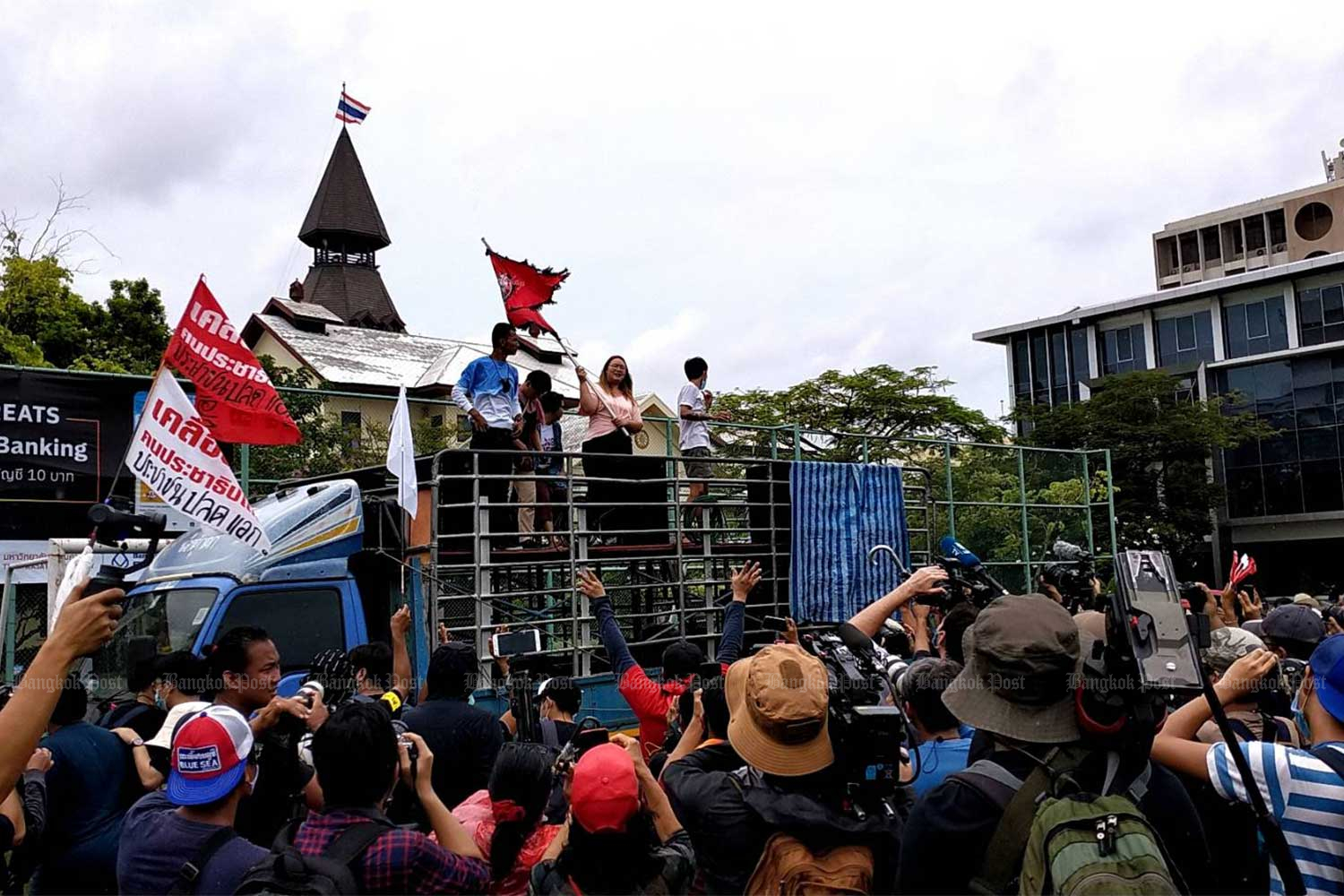 Activist Panusaya “Rung” Sithijirawattanakul waves a red flag on a truck as she and colleague Panupong “Mike Rayong” Jadnok lead demonstrators into the Tha Prachan campus of Thammasat University. (Photo by Wichan Charoenkiatpakul)