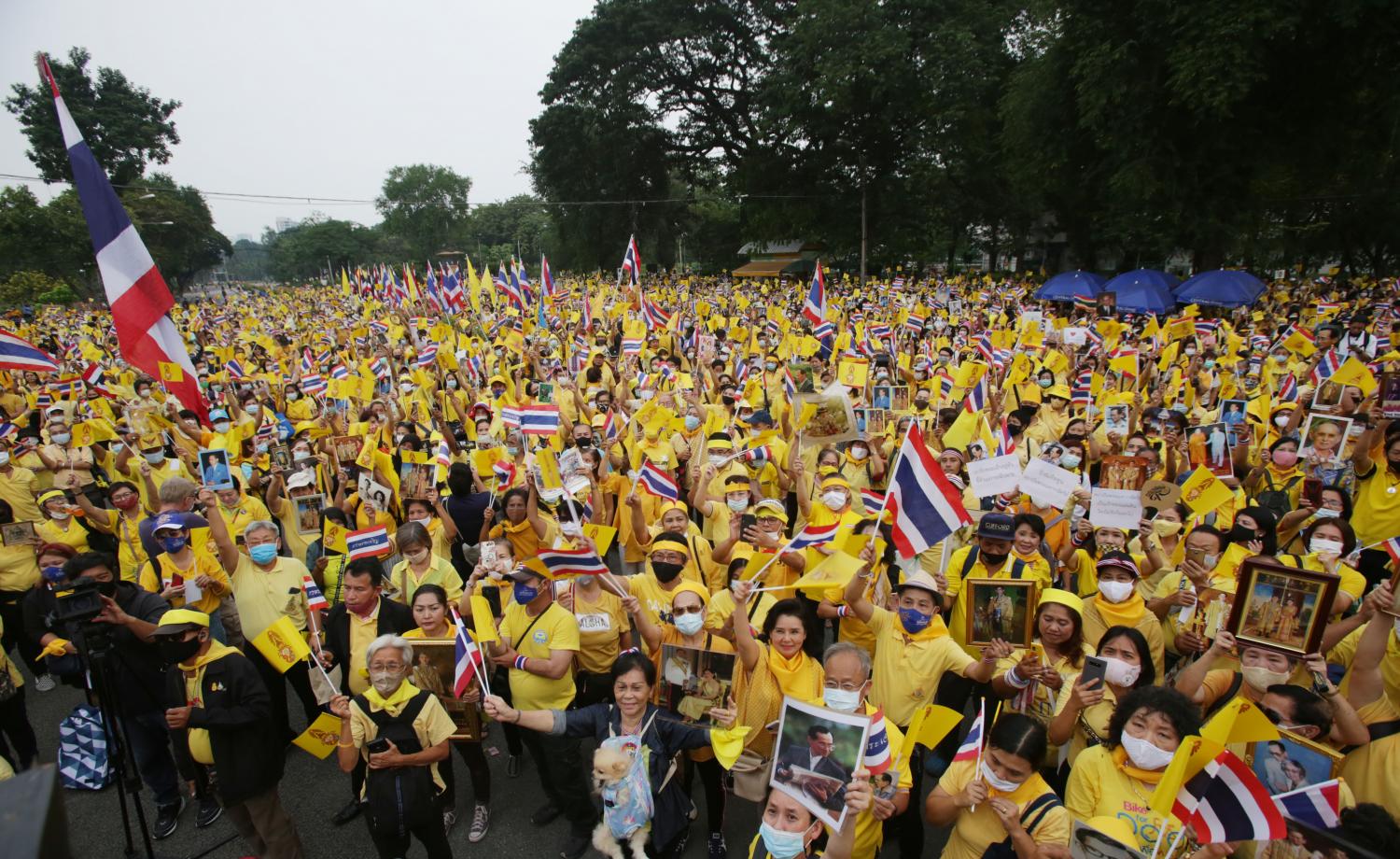 Yellow-clad people converge at Lumpini Park in Bangkok yesterday in a show of support for the royal institution. Many carried photos of His Majesty the King, His Majesty King Bhumibol Adulyadej The Great and national flags to show their determination to protect the monarchy and the nation. Apichit jinakul

Parliament is considering a proposal to form a reconciliation committee consisting of representatives of all stakeholders to resolve the ongoing political conflict.

Mr Chuan said he would also ask representatives of political parties, the government and senators whether they wanted to wait for the charter amendment bill proposed by the civil group iLaw.

If they decide not to wait, he said parliament would debate the six versions of charter amendment bills proposed by other parties when it reconvenes its regular sessions from Nov 1.

If the representatives agree to wait for the iLaw’s version of the bill, however, they will have to wait until the names of the signatories to the iLaw-proposed bill are verified, Mr Chuan said. That must be completed by Nov 12.

Mr Chuan said he and Prime Minister Prayut Chan-o-cha had not yet discussed the subject of a national referendum to decide whether the PM should resign.

Deputy Prime Minister Wissanu Krea-ngam said the government would hold talks with all those involved to find a solution to the political conflict and said “Yes” when asked if this meant setting up a reconciliation committee.

Chief opposition whip and Pheu Thai MP Sutin Klungsang said Gen Prayut must invite both coalition and opposition parties, as well as representatives of the public, to discuss the proposal so that the committee’s findings are accepted by all sides.

He called for the constitution to be amended first to ensure an election is held under new rules but said that if the House is dissolved immediately, the current charter would still still in force and the problems would remain unsolved.

The momentum for charter amendment was thwarted in late September when parliament decided to set up a special committee to study draft constitutional amendments and thus delayed the vote.

Leader of the Democrat Party Jurin Laksanawisit said his party’s proposal to set up a reconciliation committee had received a positive response from everyone involved.

He said that it would comprise representatives of the government, coalition and opposition parties, senators, protesters, those who disagree with the protesters, as well as experts.

“If parliament agrees with it, the parliament president is expected to proceed with the establishment of the committee so that parliament plays a crucial role as a democratic mechanism to resolve the conflict,” said Mr Jurin, who also serves as deputy prime minister and commerce minister.

He also stressed the importance of charter amendments as a solution to the conflict, saying all involved had agreed that the charter change procedure should go ahead.

During the special parliamentary session which ended yesterday, Gen Prayut insisted that he did not want to cling on to power but had to stay on to complete his tasks.

“You only talked about a coup but you did not mention the parliamentary dictatorship that preceded it?” Gen Prayut said in response to a grilling from opposition MPs. “Did you already forget what you did? Just look back at what happened in 2014 and before that.”

The two-day special meeting was convened on Monday in the wake of escalating street protests demanding Gen Prayut’s resignation.

The meeting was convened under Section 165 of the constitution, which says the government can request a joint House-Senate sitting for a general debate without a vote to listen to members’ opinions on issues of importance.

Bhumjaithai Party MP Supachai Jaisamut told the special session that his party was ready to support the proposed formation of the reconciliation committee to ease the political tensions.

During yesterday’s session, however, parliamentarians were in shock after Wisarn Techathirawat, a Pheu Thai MP for Chiang Rai, used a knife to slit his left wrist three times, saying it was in protest against Gen Prayut’s handling of the street protests. He was then rushed to hospital.