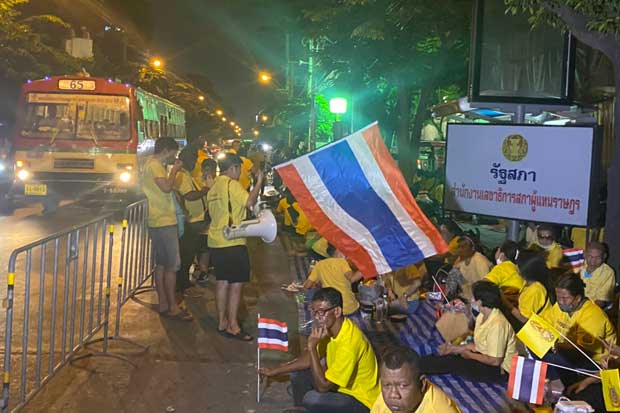 Royalists have been called to converge for a mass gathering at the statue of King Rama VI at the entrance to Lumpini Park on Tuesday for a show of solidarity and support for the monarchy, amid continuing protests calling for reform of the institution.

Taya Teepsuwan, a former core member of the now-defunct People’s Democratic Reform Committee and wife of Education Minister Nataphol Teepsuwan, on Sunday wrote on her Facebook page urging people to wear yellow shirts and congregate in front of the park at 5pm as a symbolic act of support for the monarchy.

Yellow-clad supporters of the monarchy on Sunday converged in gatherings across many provinces.

In Phangnga, over 700 people showed up around the statue of King Rama V in Muang district, holding images of His Majesty the King and His Majesty King Bhumibol Adulyadej The Great while waving the national flag. One of them was the province’s Democrat Party MP Kantawan Tanthian.

They also shouted condemnation against anyone who disrespects the monarchy, before announcing their plan to gather at 4pm on Tuesday at the province’s government complex.

A number of royalists camped out overnight outside parliament to “protect” the legislative compound amid speculation that it might be surrounded by anti-government protesters seeking to pressure Prime Minister Prayut Chan-o-cha to resign.

In Lop Buri, about 1,000 people came together and swore to protect the monarchy. They read out a statement demanding anti-government protesters to stop offending the monarchy.

In Khon Kaen, more than 2,000 village headmen and health volunteers gathered in front of Ban Phai district office, calling for the enforcement of the law against individuals who insulted the monarchy.

Suwit Kalasin, chairman of the local leaders association in Ban Phai district, said the youth-led protesters must not cross the line.

Meanwhile, the Facebook page of the Royal Thai Volunteers on Sunday explained His Majesty the King’s remarks to a man who held up a portrait of King Rama IX at an anti-government rally.

The page said the man was “very brave” for standing up for his beliefs, while “very good” referred to his ability to remain composed in the face of pressure. By saying “Thank you”, the King commended him for believing in the royal institution and not resorting to violence, it said.