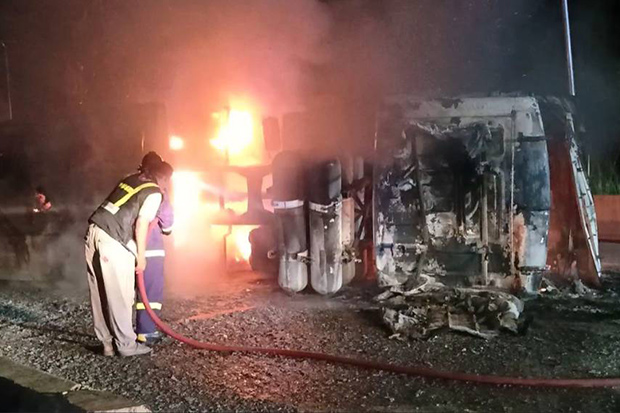 Firefighters extinguish the burning trailer truck that had overturned on a hill road in Nidi district of Prachin Buri province early no Wednesday. A two-month-old child travelling in the truck was killed. (Photo by Manit Sanubboon)

PRACHIN BURI: A two-month-old child passenger was killed when a trailer truck overturned and went up in flames on a downhill road in Nadi district in the small hours on Wednesday.

The driver and his wife, the baby’s parents, were seriously injured.

The accident occurred about 12.30am while the trailer truck was on a winding downhill section on Highway 304 in a mountainous area through Thap Lan and Khao Yai national parks in tambon Bu Phram, Nadi district.

Police from Wang Khon Daeng police station, rescuers and a fire engine were rushed to the scene  They helped the driver and his wife out of the burning vehicle. Both were seriously injured. Their baby, about two months old, was found dead in the truck’s cabin.

The fire was put out in about 10 minutes.

Police were investigating the cause of the accident. Brake failure was suspected.

There are signs along that road warning truck drivers to engage low gear.