Prime Minister Prayut Chan-o-cha and other cabinet ministers targeted for the censure grilling greet each other in the chamber after they survived the no-confidence motion yesterday. The vote followed a four-day debate which ended on Friday.

The future of three cabinet ministers hangs in the balance following the no-confidence vote in parliament on Saturday, despite the government surviving the motion, political analysts say.

The coalition government has a clear majority in the House of Representatives, so they were expected to sail through the vote. Yet the number of no-confidence votes they received, as well as abstentions, is seen as a sign of trouble for the three ministers.

The votes were cast despite reports that Deputy Prime Minister and PPRP leader Prawit Wongsuwon ordered the party’s MPs to give an equal number of votes to each scrutinised minister.

Stithorn Thananithichote, director of the Office of Research and Development at the King Prajadhipok’s Institute (KPI), told the Bangkok Post the results do not bode well for the trio, who are at risk of being reshuffled or removed from the cabinet.

Mr Jurin is in a more precarious situation than the two PPRP members because he faces internal and external challenges, according to Mr Stithorn. 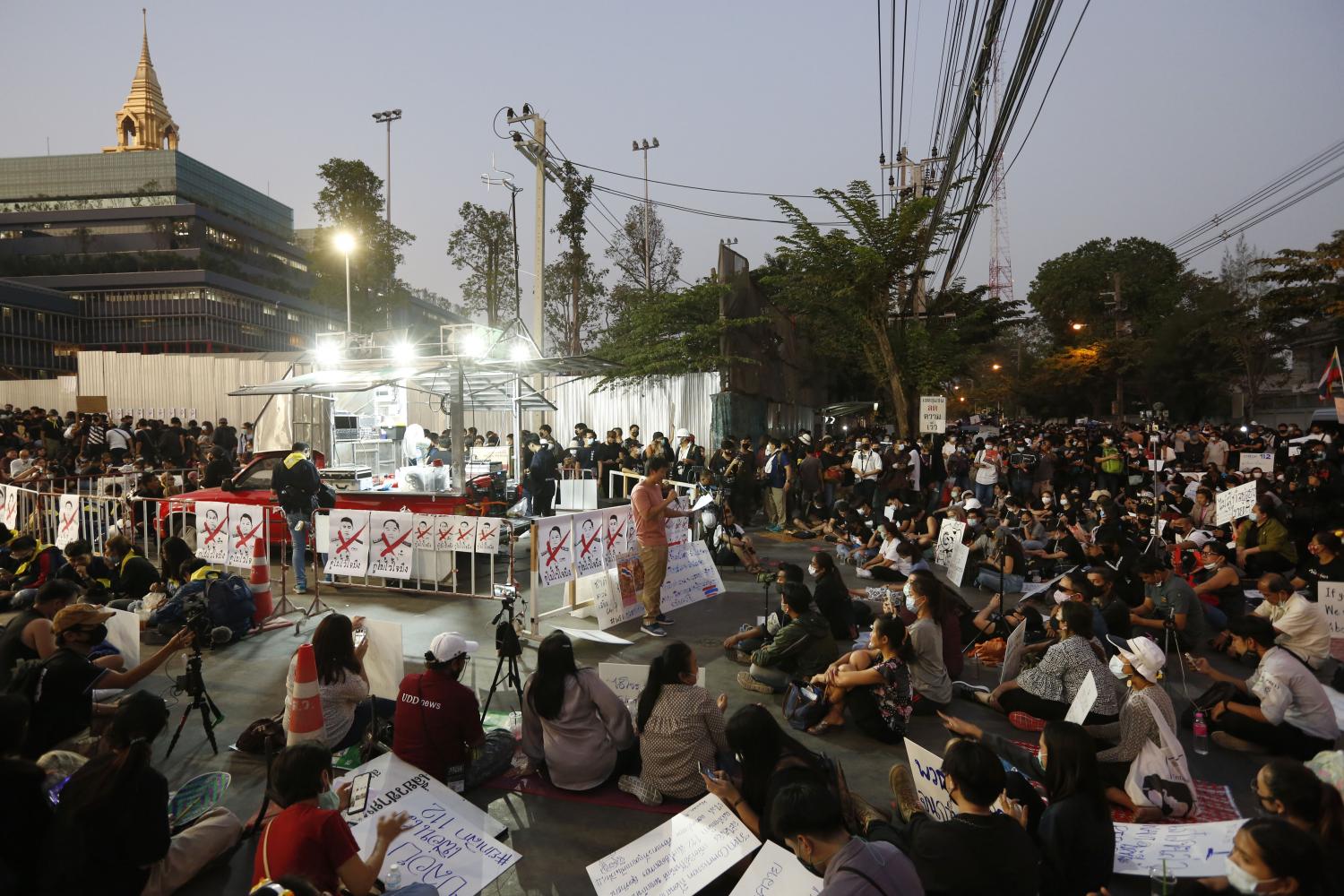 having their say: Anti-government protesters organise a mock censure debate against the government outside parliament on Saturday afternoon. They repeated their calls for Prime Minister Prayut Chan-o-cha to resign.

The first challenge stems from coalition partner PPRP, which reportedly wants to take over the Commerce Ministry, one of the key economic ministries, from the Democrat Party.

Mr Jurin’s performance as commerce minister is far from impressive as he does not have a proactive approach. As a result, the ministry cannot drive the government’s economic policy, especially exports, as expected, Mr Stithorn said.

Mr Jurin did not fare well during the censure debate when addressing the opposition’s questions about irregularities. This will increase pressure on Mr Jurin and make him a potential target during a cabinet reshuffle, he added.

The other challenge comes from within the Democrat Party, as the vote result could be used against him by colleagues unsatisfied with his leadership, the academic said, adding the leader will have to clear the air with key PPRP and Democrat Party members.

Mr Stithorn said although Mr Nataphol received the worst scorecard — the least votes of confidence and the most no-confidence votes — the ministry may still keep his cabinet seat if he can clear the air with key PPRP figures.

It has been reported that a faction consisting of PPRP MPs is unhappy that Mr Nataphol’s wife, Taya Teepsuwan, plans to stand as the PPRP candidate in the upcoming Bangkok governor election against another potential candidate backed by the faction.

Mr Stithorn said if the vote highlights the internal rift over the gubernatorial contest, Mr Nataphol can negotiate and keep his post.

The academic said the vote result also speaks volumes about the undercurrent against Mr Suchart, whose labour portfolio is being targeted by some PPRP figures.

Phichai Ratnatilaka Na Bhuket, a political scientist at the National Institute of Development Administration, said he sees the vote result for Mr Jurin as a sign of persistent internal conflict.

He said several Democrat MPs do not want the party to join the Prayut administration and the vote is likely to be used to demand the party’s withdrawal from the coalition.

Prime Minister Prayut Chan-o-cha ruled out a cabinet reshuffle, saying he has no plan to make changes for the time being.

“No reshuffle. I haven’t considered it yet. I evaluate [cabinet ministers] based on their performances. The useful information in the censure debate will be reviewed,” he said.