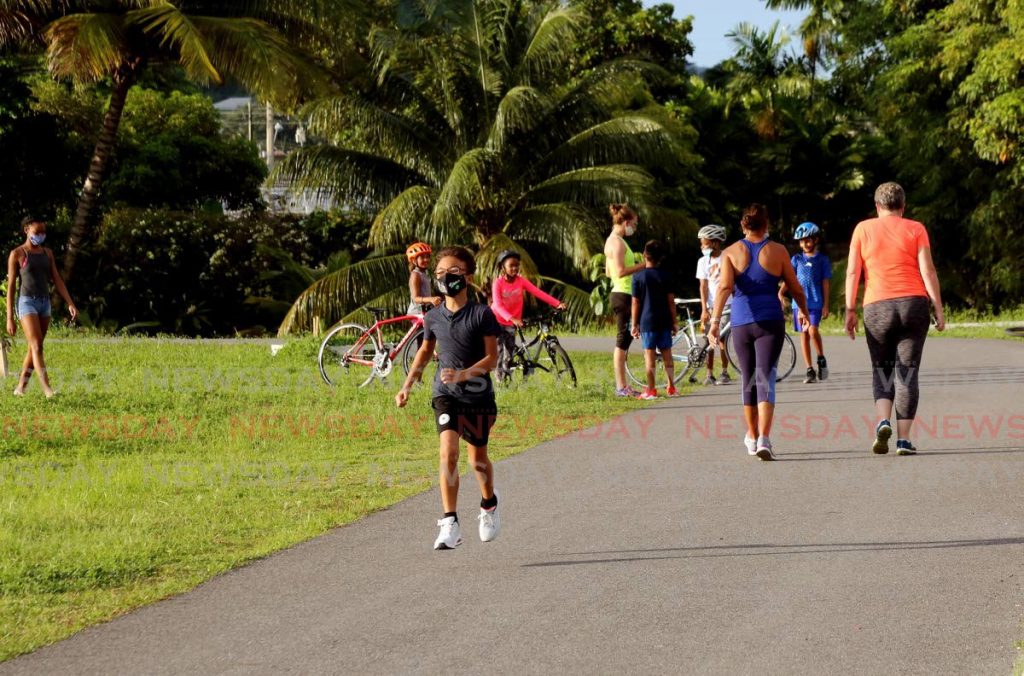 OLLIE is a friendly, shaggy, salt-and-pepper German Shepherd Husky. He will let anyone play with him.

Every time Ollie rolls over for a stranger to pet him, Ivana, his owner, says, “You’re not supposed to be friendly, you’re supposed to protect me.”

Ivana and Ollie were walking around West Park Savannah in Diego Martin for the first time two Fridays ago when Sunday Newsday visited.

“I feel safe here. My brother is walking Ollie’s sister right now, and he does not have a problem with me walking alone.”

Ivana’s accustomed to walking around the Queen’s Park Savannah, but never with Ollie. She lives with her family and was happy for the convenient drive from home to West Park Savannah.

Wedged in the corner where the Western Main Road meets the Diego Martin Highway, West Park Savannah borders the Diego Martin River and Victoria Villas. The ground on which the park stands is an aquifer: there is water under its permeable rock, and it includes two wells and a pumping station. Next to the station is a shallow pool of water near the main road.

In 1922 the pumping station was built to send water to people in Port of Spain by Charles Richards Farrell, who became the first local city engineer in 1918. At that time, much of Diego Martin was not developed.

Farrell was responsible for water and sewerage works. He designed four pumping stations throughout the city: in Woodbrook, Belmont, St Clair and Westmoorings.

West Park Savannah has the only surviving pumping station. His granddaughter Rosemary Stone is advocating for the building to be turned into a museum. The National Trust intends to list it as a heritage site.

By the 1960s, the aquifer’s water had turned brackish and the pumping station went out of use. For decades, the land remained untouched, overgrown and occupied by squatters. The 23-acre site has been owned by the Port of Spain City Corporation for approximately 100 years. Mayor Joel Martinez said it was called Cocorite Farm Land.

But the city corporation had to prove land ownership in 2011 when it took the Water and Sewerage Authority (WASA) to court. Former mayor Louis Lee Sing saw the importance of green space in urban development and wanted the land used for a park.

“We agreed all of the west was either glass, concrete, mortar or steel…Green spaces are integral to the city and life in communities,” he told Sunday Newsday.

“We invited them all, with the intention to have full participation. At the end of it, we proposed a plan which would include a jogging and cycling area around the perimeter.”

The Prime Minister describes that plot as the “most desirable piece of land” in the country. Dr Rowley became MP for the area, Diego Martin West, 29 years ago. Since then, people have been lobbying to use that space.

“They were good ideas, but limited use. I always believed because of its location and its value to the entire wider community, it should be put to public use,” Rowley said.

Initially, he wanted to build a school there. Many pushed against the idea, as nearby residents feared more traffic. Data showing a decline in the birth rate and residents sending their children to Port of Spain schools dissuaded him.

Rowley describes Diego Martin as one of the most densely populated parts of the country. The most recent census data from 2011 says Diego Martin has approximately 103,000 people in 127.53 square kilometres of land. However, more housing developments have been constructed in nine years.

He said there was no major park area in south Diego Martin, in the Westmoorings, Pt Cumana and Cocorite areas.

“If you look at the number of people who live in and around that piece of land, you will appreciate the value of an open space…That piece of land was so ideally located.”

“Anyone can get to it easily and safely. It is probably the best location that could have been provided to the people of south Diego Martin.”

Rowley says West Park Savannah has been
one of the success stories of his time as an MP.

The Urban Development Corporation of TT (Udecott) was the park’s project manager and oversaw the landscaping, jogging track, car park and administration building. A new building for the regional corporation and a First Citizens branch is under construction. The only area not leased to the regional corporation is parcelled off for a new intersection between the Western Main Road and Diego Martin Highway.

The park has a 24-hour guard and is lit by solar panel lamps donated by First Citizens.
When Sunday Newsday visited around 6 pm, the car park was almost full.

Gary Voss and Stuart Dalgliesh are community organisers who have been lobbying for the park for almost 12 years. The two are administrators of the park’s Facebook group, which discusses park issues and plant donation.

“We are so proud, after years of lobbying to get people involved, we got the park. It could be bigger, but say what,” Voss told Sunday Newsday during a tour of the park.

Voss, 75, retired as chairman of Unilever 20 years ago. When he used to work, he would walk around Queen’s Park Savannah, but bumper-to-bumper traffic coming in and going out of Diego Martin could be stressful and “terrorising.”

“You have to walk early. Once the traffic builds up, all the exercise gets cancelled off by the carbon monoxide.

Though grateful for the space, Voss wants park rules.

“There would be a lady with a pram and toddler, going alongside her are a couple men on racing bikes. It needs some control, some order. People who allow their dogs to do business in the park don’t pick it up.”

Even before the park officially opened on July 3, Voss and Dalgliesh were planting trees. There are now 125, of 31 different varieties.

“The community really got together. These trees, I put them in, but people donate them. People come in and say, ‘I have a flamboyant,’ and I say, ‘Bring it.”

“It’s going to be a botanical garden in a few years,” Voss said.

Voss’s favourite is the samaan tree. Also known as rain trees, samaans provide cover when it rains and sprinkles people with water droplets after the rain stops. Voss hopes he lives long enough to take shelter under that fully grown samaan tree.

The Giants Multi-Sport Club has been using the park as their running ground since it opened in July. The group is an after-school athletic programme for children and teens. Before West Park Savannah opened, they would run around neighbourhoods in Diego Martin, encountering cars, barking dogs and complaining residents.

After training, the teens stood and chatted away in the car park, relaxing with their friends.

Melenlle, 14, and Jenae, 13, have been home since schools closed in March, and miss their friends. Melenlle goes to St Joseph’s Convent, Port of Spain and Jenae to Providence Girls’ Catholic School in Belmont.

“I’m really enjoying the park, I never had a place like this before,” Jenae said.

The two train with Giants and are grateful for the chance to get out of the house together.

“As much as we can talk to our friends on social media, it is not the same. I miss seeing my friends and spending time with them,” Jenae said.

A couple rode around the track on bicycles. A father taught his daughter to ride and how to pick herself back up when she fell down. A young couple played with their toddlers in the grass, while other children played together in their parents’ sight.