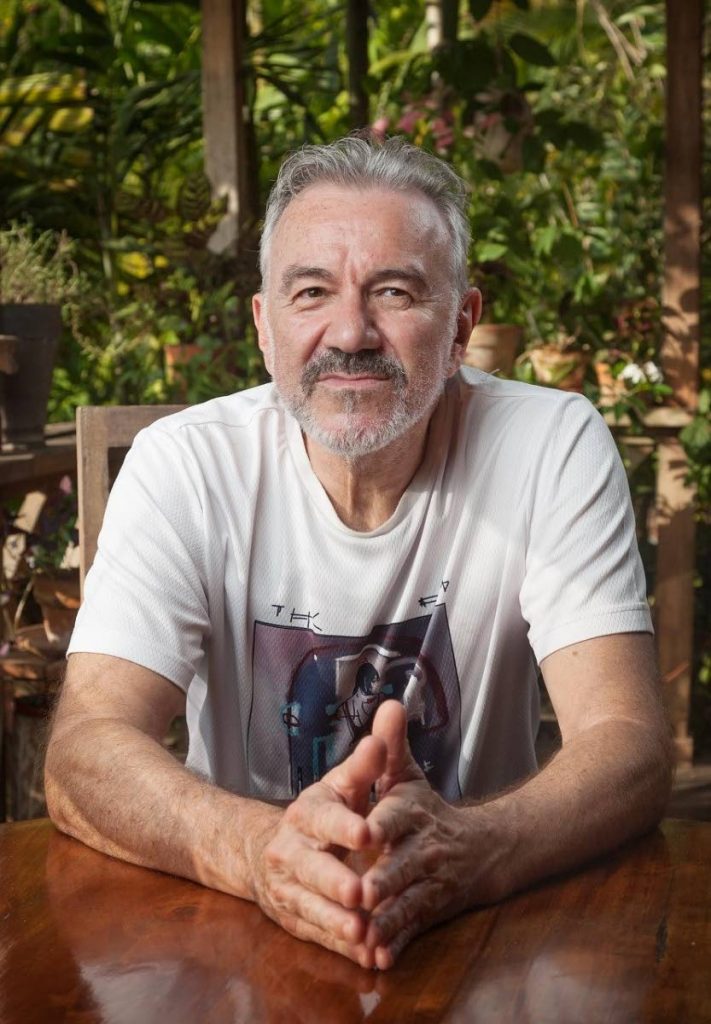 AS TOLD TO BC PIRES

My name is Jean Michel Gibert and I feel honoured – and lucky – to have produced Calypso Rose’s new album, Forever, at her sweet age of 80.

I am born in South of France, in Nice, a Niçoise. It is through French Trini, Lorraine O’Connor, who become my first wife, and is still a business partner, that I discover that Trinidad and Tobago exist, in January 1986. In 2014, I became a citizen.

I consider myself as coming from, not a particular part, but from TT as a whole.

I am happily remarried since 15 years to Helen Carrington.

I attended the best commercial school in France, Hautes Etudes Commerciales, a kind of French Harvard. Being part of the Seventies “Beat generation,” I went backpacking all over the world, especially Asia.

I was raised Catholic, holy communion, etc, but from the time I start to read the French philosophers and political consciousness grew in my teens, I didn’t follow any more any established faith.

I can go to a beautiful Indian temple, visit a mosque in Morocco, meditate with monks in Japan or trek to a church in the mountain in the Alps – but I will not follow a preacher.

I believe in Mother Nature and mankind. I believe there is a meaning in what we do.

In the Seventies, my Beat generation rejected the system and dreamt of a different world and a more open life. To allow us to grow, personally and spiritually.

In Asia, Buddhism influence my perception of life and I became a vegetarian at age 20. I still eat fish.

Since 1992, I live full-time in Trinidad, spending my energy to promote abroad our musics and our culture. I represented TT in many major music and film markets – this guy trying to convince people passionately of the potential of TT lifestyles and entertainment industries – but with a French accent!

I had major international successes such as gold single, Sweet Soca Music, silver single Follow the Leader and, the ultimate, Rose’s platinum album, Far from Home. My movies, such as [email protected] Dirty Jims, Rose the Lioness of the Jungle and Pan! Our Music Odyssey, were awarded in various international film festival.

In Trinidad, the musical talents were there, but not the entrepreneurs to expose these unique styles beyond the diaspora. Along with business partners Lorraine O’Connor and Rosemary Hezekiah, I decided to try to fill the gap.

While working on the movie [email protected] Dirty Jims in 2004, I was blessed to meet with Rose and it changes my life.

Sixteen years, three albums, two movies, several videos and many singles later, and after becoming her international manager (and spending every day more than five hours of my days solving problems), see where we are today!

I have never wear in my life a jacket and a tie, except to climb the steps at Festival de Cannes with Rose, for the preview of the documentary Calypso Rose: The Lioness of the Jungle. I borrowed a tuxedo and a bowtie as it was compulsory.

I (prefer) my son Sebastien’s urban clothing. At age 65, I feel I am looking myself in his trendy short pants, jeans and T-shirt, with my THC sandals…And maybe it makes me feel still young.

I have countless beautiful memories of my music involvement in Trinidad, so many great artists and human beings.

The talent of the artists and the producers is not enough. You need a lot of different ingredient for an international hit.

In South of France, we say “Pour que la mayonnaise, prends”: “For the mayo to raise, you do it yourself, with eggs.”

The release of Forever next month may be the proudest moment of 30 years immersed in TT music. It is a statement of the love Rose shares and the energy she spreads.

Today’s Carnival is highly seasonal and topical. It’s like wearing an elaborate mas costume that you just dump on Ash Wednesday. Maybe (modern) Carnival musics do not have the longevity other styles can create.

Calypso Rose, with her charisma, her story, her collaborations, seems to be an exception. And not just because she is keen to take risks, but also because she reincarnate and rejuvenate a style – calypso – which is more palatable that the actual Carnival music genre for mainstream music lovers.

When I experience how difficult it is for our local team to put together a show for Rose, or release her new songs, I am not sure these aspects of our culture are sufficiently appreciated by the society.

So I always wonder, if a highway in Trinidad could be shortened by just 30 metres, that would change the game and enable us to dynamise a sector which addresses the dreams of the most fragile growing sector of our society: the youths.

My favourite film is The Godfather, Parts I and II. Three Colours is my number two. And then The 400 Blows and
Au Hasard Balthazar.

It’s difficult to pick one song on Rose’s new album because she is exploring different distinct styles – the ska style One by One with Kobo Town and Mr Vegas, eg, will be a classic – but I really enjoy Watina.

It is a Garifuna, Afro-based anthem, originally sing by the great Andy Palacio, reproduced with a modern twist, a great melody and a catchy hook in Garifuna dialect.

To me, a Trini is someone who has a Catholic father, a Hindu mother, a Muslim brother and a sister who is Rasta. Or could have Chinese, Carib, African, East Indian and “Syrian” in them.

To me, TT means my chosen home since close to 30 years!

Here is a link to the lyrics video of the new international release Same Boat by Calypso Rose featuring Patrice and Kobo Town remixed by Guts and Izem, available from 8 July:
https://youtu.be/ExFop4dqSmM

Read the full version of this feature on Saturday at www.BCPires.com