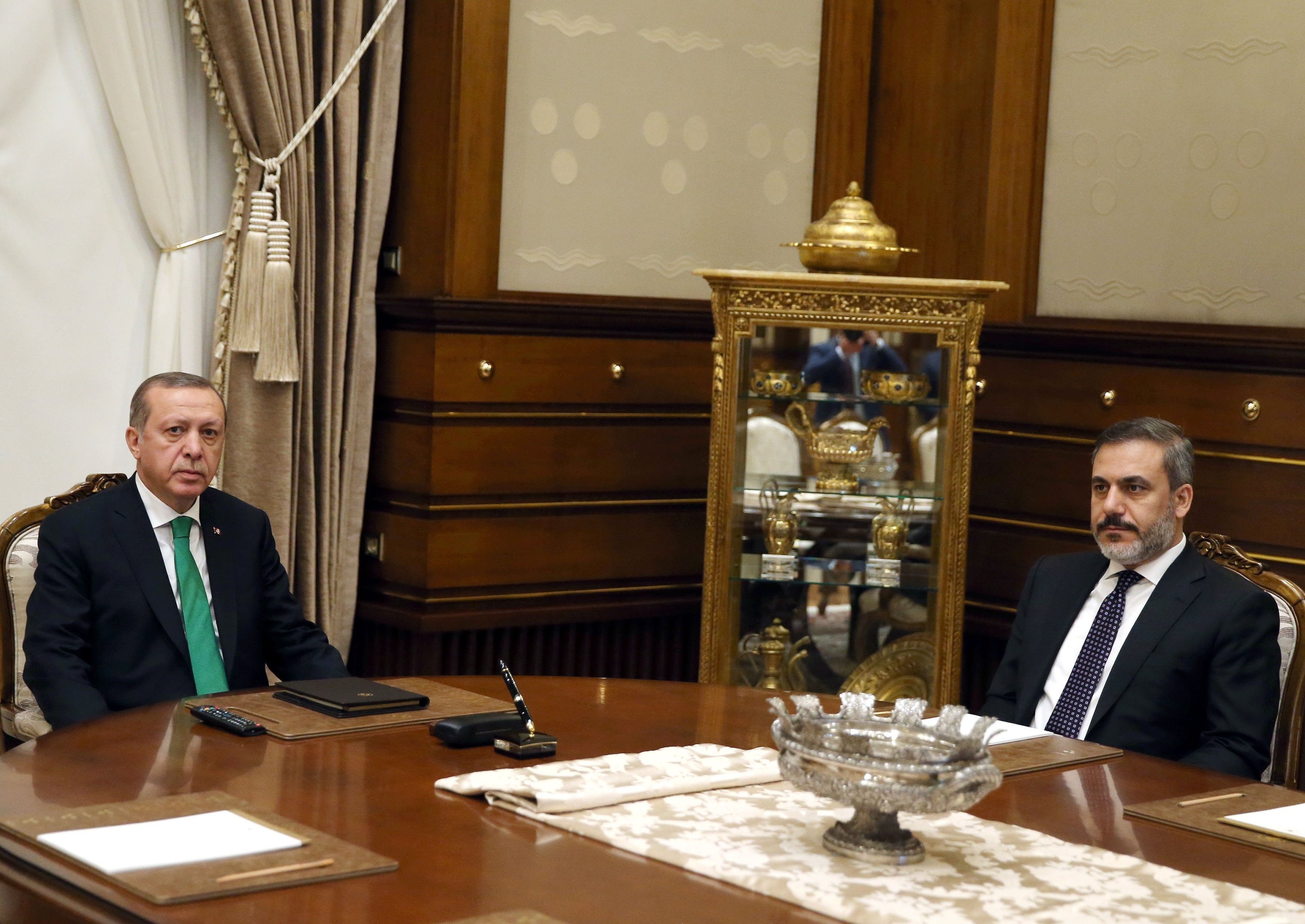 Ten suspected members of the Gülenist Terror Group (FETÖ) involved in a plot that targeted Hakan Fidan, the director of the National Intelligence Organization (MIT), were sentenced to life terms on Wednesday.

Defendants, including former police chiefs, associated with the terrorist group were already serving time for other crimes involving FETÖ. According to prosecutors, they were the “police leg” of a wider plot orchestrated and executed by the group’s civilian members and infiltrators in the judiciary. The trial is publicly known as the “Feb. 7 MIT plot” against MIT.

Feb. 7 refers to that day in 2012 when Fidan, director of MIT, found himself at the center of an investigation by prosecutors. He was summoned by prosecutors to give testimony but decided to skip it at the last minute, upon the instruction of then-Prime Minister Recep Tayyip Erdoğan. Indeed, it turned out to be an attempt to imprison Fidan based on forged evidence and trumped-up charges. Prosecutors say it would be a win-win for the terrorist group who had difficulty in infiltrating the intelligence service and tarnishing the image of the government.

Nowadays, it is known as the first attempt to damage the government by FETÖ, which tried a similar plot by detaining those close to the government in 2013 and finally, attempted to stage an all-out coup by using its infiltrators in the army. All failed and the group faced heightened scrutiny by authorities.

The case involving Fidan, built by prosecutors with ties to FETÖ, sought to link the intelligence service with the terrorist group PKK. A sham investigation was launched after audio recordings leaked to the media that indicated there had been talks between MIT officials and PKK members. The talks were originally part of the government’s “reconciliation process” designed to put an end to PKK violence. However, the leaked tapes ended up being fodder for anti-government propaganda, with FETÖ-linked media outlets claiming collaboration between the PKK and the government.

The court ordered the defendants – including prominent police chiefs Yurt Atayün, Ali Fuat Yılmazer and Erol Demirhan – to be sentenced to aggravated life on charges of “attempt to overthrow the government,” while a journalist tried in the case was sentenced to eight years and four months in prison for membership of a terrorist group and violating the secrecy of an investigation.

One of two prosecutors behind the plot, Sadrettin Sarıkaya, remains in prison and a separate trial is in process for him over the plot, while the other prosecutor Bilal Bayraktar remains at large. Other trials against FETÖ’s civilian fugitive members, including the terrorist group’s leader Fetullah Gülen, are also ongoing.

“It is understood that the FETÖ terrorist group sped up its efforts by trying to question Fidan after their sham trials and conspiracies such as the Ergenekon, Balyoz, Poyrazköy trials; Izmir military espionage and the Tahşiye, Selam Tevhid, the Dec. 17-25 and MIT trucks cases,” an indictment against the defendants read, referring to a series of investigations and trials launched by FETÖ-linked prosecutors, police chiefs and judges.

Two years after the incident, the terrorist group had tried to deal a blow to the intelligence service with another plot. In January 2014, prosecutors affiliated with FETÖ ordered gendarmerie, also linked to the group, to stop a convoy of trucks belonging to MIT in Adana and Hatay provinces on their way to Syria, despite government orders to let the trucks pass. The supplies in the trucks were seized and the MIT agents were handcuffed and detained. The incident caused an uproar. Last year, a court ruled that the incident was a plot planned and executed by FETÖ “to harm the state” by disclosing activities of the intelligence service. A separate investigation was launched into Can Dündar, the journalist who published the photos of the trucks’ contents, for his role in the plot. The investigators say the MIT truck case was an attempt to discredit the intelligence service and tarnish the government’s image by accusing it of supplying arms to militants in Syria.

FETÖ maintained a large network of infiltrators in the judiciary, law enforcement, bureaucracy and military for a long time. In the past years, hundreds of investigations were launched across the country to unveil this intricate network. Criminal probes revealed police chiefs and prosecutors were at the forefront of the group’s efforts to imprison its critics or plotting against anyone deemed an obstacle to FETÖ’s goals. Yurt Atayün and Ali Fuat Yılmazer, who were sentenced to life on Wednesday, also figured in other FETÖ plots like the Tahşiye case where a religious group was targeted and had its members investigated based on fabricated evidence. In December 2020, both men were sentenced to life for the Selam-Tevhid case, which involved illegal wiretapping of hundreds of people under the guise of an investigation into the “Selam-Tevhid terrorist group” concocted by FETÖ-linked police officers to justify wiretaps.