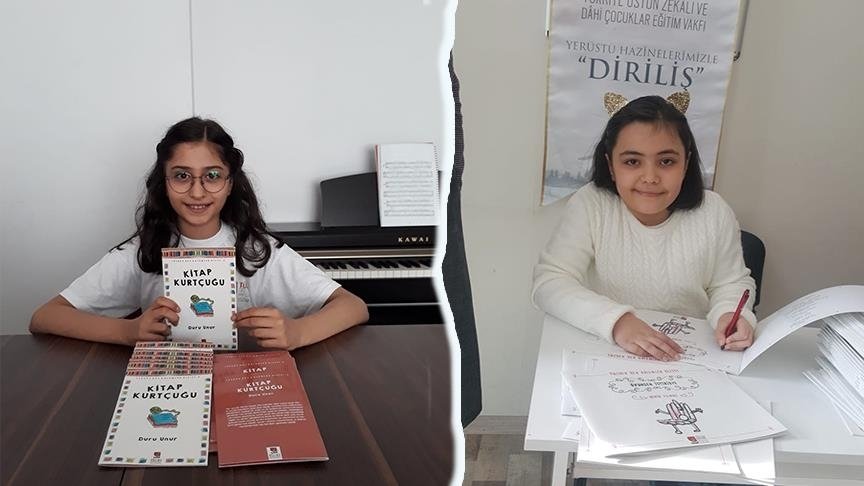 Duru Unur and Nehir Yılmaz found their calling in writing at a very early age. First relying on their parents to convey the stories they conceived, two girls now pen their own.

The girls’ writing ability was recently discovered when they attended workshops of the Turkish Gifted and Genius Children Education Foundation (TÜZDEV).

When she started writing her first book “Kitap Kurtçuğu” (“Bookworm”), Unur was just 8. Last year, she published one book and now is working on her second. She said that her book includes eight short stories – most featuring animals – which provide a moral at the end. Her second book will be action based and will also use mathematical formulas she learned, said Unur. “I’m planning to publish my second book this year,” she stressed. She went on to say that she was planning to do book signing events but was unable to due to the COVID-19 pandemic. In writing her stories she is inspired by daily life and other books she reads, she said. “I read a lot of books, I love reading books,” she added, stressing how they inspire her.

Yılmaz, who is now in sixth grade, started writing stories at the age of 8. “I’ve written nearly 60 stories so far,” she said. She completed her first book titled “Övüngeç Istiridye” (“Boastful Oyster”) two years ago, and it was published in 2020. The book includes 15 short stories and illustrations by her own hand. “My book is made up of stories, one by one. I tried to give people lessons in each of them,” she stressed. She said that her surroundings inspire her to write, adding: “For example, when one of my fish died, I wrote a story about it.” Urging other children to write as well, she underlined the importance of reading. “They should read lots of books if they want to write a story. If they don’t read, they can’t write anything,” she explained. “Also they shouldn’t worry if they wrote bad stories, they will improve gradually.” The 10-year-old said in the future she wants to be an author.