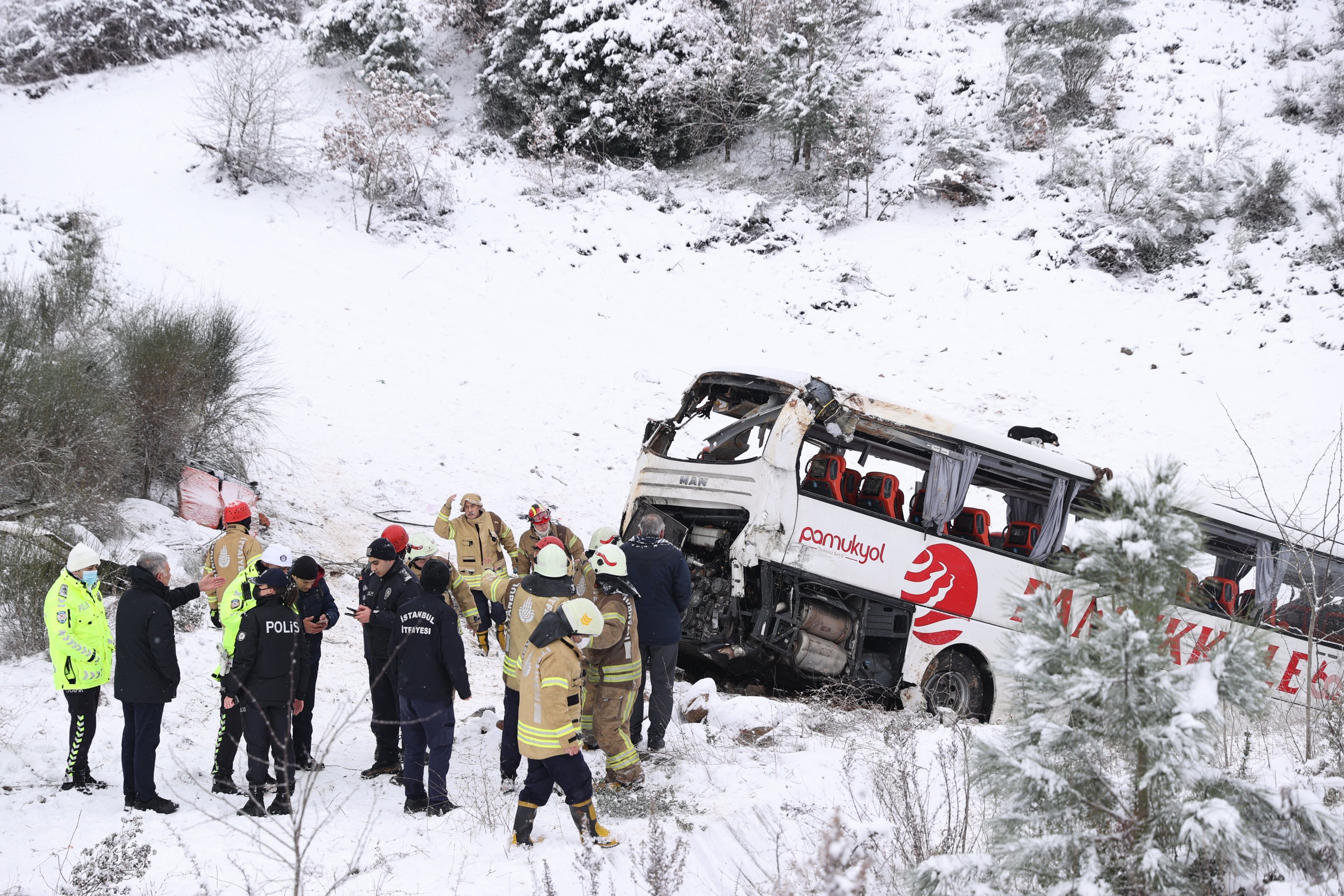 It was reported that the bus driver was among the three people killed. Ambulances were immediately dispatched to the spot on the Northern Marmara Motorway.

According to Anadolu Agency (AA), the bus was en route to the Aegean Denizli province.

Due to heavy snowfall, the bus rolled into a 30-meter (98-feet) deep ditch near the Çamlık Tunnel area on a road connecting the Trans-European Motorway (TEM) to the Northern Marmara Motorway.

In addition to the ambulances, fire squads, the National Medical Rescue Team (UMKE) and Disaster and Emergency Management Authority (AFAD) crews and security forces rushed to the area.

The 18 wounded passengers were taken to nearby state hospitals for treatment after receiving first aid at the scene. The bodies of the deceased have been sent to the Institution of Forensic Medicine for autopsies.

The majority of accidents result from reckless driving or pedestrian negligence. Some 37,631 accidents occurred as drivers violated speed limits, overtook other vehicles at dangerous spots and violated rules while changing lanes.

Figures provided by the Traffic Department of the Turkish police show 217,462 accidents took place in Turkey in the first seven months of 2021. The accidents also injured 139,448 people. In July alone, 297 people died in 43,166 accidents, injuring more than 34,000 people.

The highest number of traffic deaths this year was in the southern province of Antalya, with 75 deaths since January. It was followed by the central province of Konya with 66 death. In Istanbul, the country’s most crowded city with more than 15 million people, 51 died in accidents between January and July.

Earlier this year, the country launched a new action plan and strategy for road safety. Turkey was one of the signatories of the United Nations’ global road safety improvement plan in 2010. The next year, it implemented a strategic plan for road safety and gradually updated it. Authorities credit new measures, such as speed limits for the drop in accidents and fatalities.

The number of fatalities per 100,000 people dropped to 5.9 in 2021, from 13.4 in 2010. The construction of divided roads that ensure vehicle safety against those attempting to overtake other vehicles and improved road infrastructure are also credited for bringing down the number of accidents and fatalities.

Turkey plans to boost traffic inspections and redesign “black spot” roads where most accidents occur as part of its strategy to decrease accidents. An awareness campaign to educate the public about dangers on the road is also underway.

The Interior Ministry also holds events to highlight the “pedestrian first” rules on streets, conveniently ignored by callous drivers who do not slow down at pedestrian crossings.