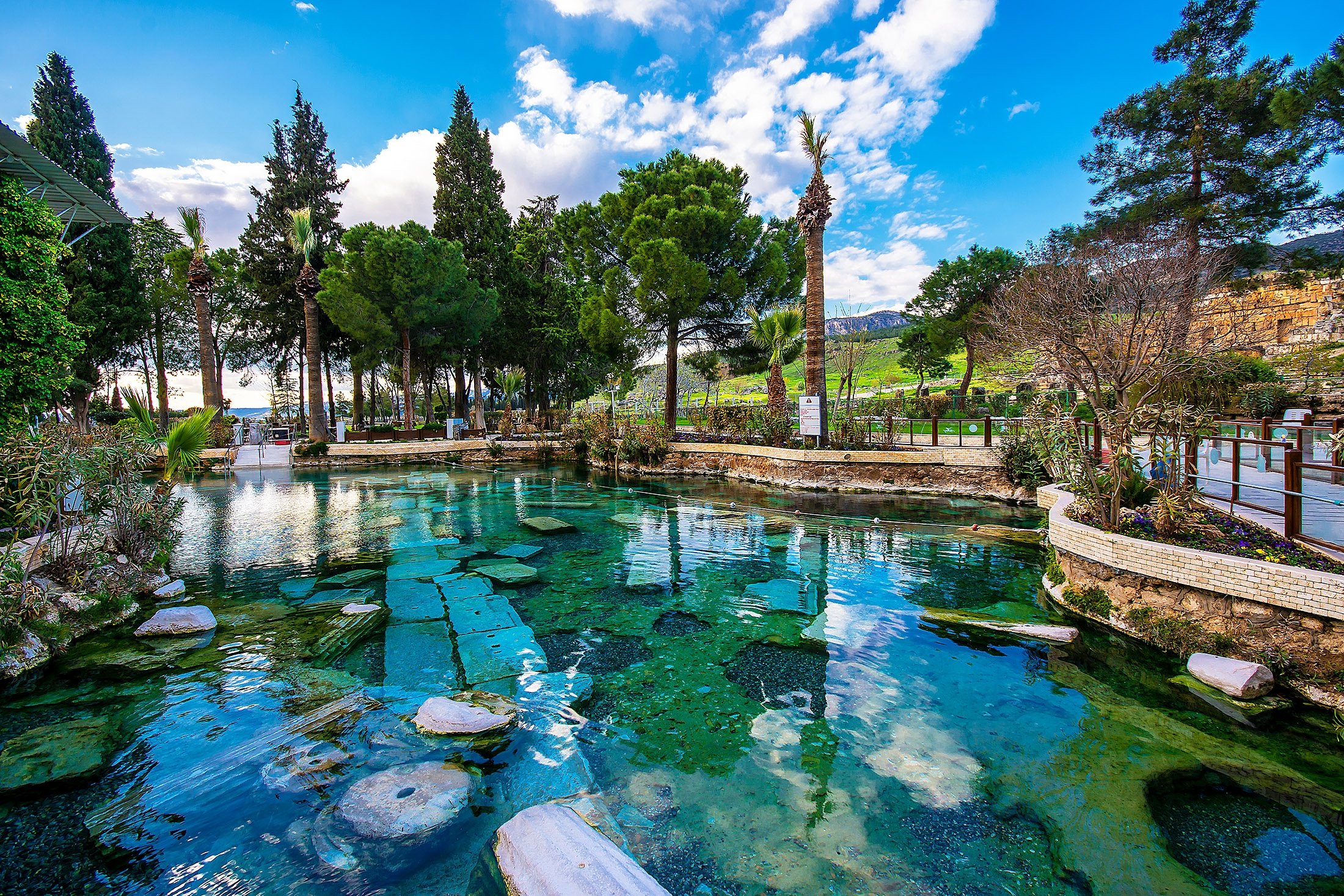 With the height of the summer frenzy behind us and the weather starting to cool, there is no better time than now to take part in a relaxing and healing mud bath in one of Turkey’s many beloved yet off-the-beaten-path vacation destinations.

Turkey has a number of historical and well-known mud baths and thermal springs spots that can easily be incorporated into a holiday or weekend getaway. Accessible by boat, plane, train and automobile, check out some of Turkey’s most wonderful towns that host historical and medicinal mud baths, immersing in which is a detoxifying and curative beauty regiment that has been common in this region for eons.

The natural mud baths in Turkey are mainly created from the thermal spring waters rich in sulfur and minerals believed to be an elixir of youth for the skin. The tightening effects on the skin as the mud dries can help decrease the appearance of wrinkles and stretch marks and heal certain skin disorders. Mud baths are also believed to cure rheumatism and joint diseases and the overall experience of playing in and being lathered up in mud is both exhilarating and relaxing at the same time.

Egyptian Queen Cleopatra was famed for enjoying a number of Turkey’s thermal springs and in fact, her whirlwind love affair with Marc Antony was delightfully marked by them. The Roman general must have been well aware that soaking in the thermal sulfuric pools of water and lathering in its mud, were very much a part of the Egyptian queen’s beauty regiment. He is even said to have gifted the queen the thermal bath named after her in Denizli’s Pamukkale.

Getting muddy in the ‘Cotton Castle’

Denizli’s UNESCO World Heritage Site of Pamukkale, which translates from Turkish into “Cotton Castle,” consists of the miraculous formation of leveled white travertine saucer-shaped pools created from the calcium and minerals of thermal springs. Visiting this destination is a must and while it is not by the coast, Denizli is easily accessible via plane, car, bus and even train! Although a train ride is the longer option time-wise, I used to make it part of any tour with friends around Turkey. The charming sleeping cart with a window from where you can watch all the towns you pass would make the journey an equally interesting part of the adventure. In Pamukkale, there are loads of bed and breakfasts that line the town with the stunning vista of the pools as a backdrop. The mud bath part of the excursion takes place in the very calcified terraces themselves, and you will see the terraces where mud has developed as you walk through the designated path, barefoot no less as required by the protective measures.

The site of Pamukkale also has a Hierapolis, which was an ancient spa city built by Romans in the second century B.C., equipped with an amphitheater and impressively preserved column walls as well as the famous “Cleopatra’s Ancient Pool,” an expansive thermal pool with ancient columns in the water that was a gift from Marc Anthony to the Egyptian ruler. For a walk on the wilder side, head to Karahayıt, a town located less than 8 kilometers (5 miles) north of Pamukkale, which serves as a miniature version of its historical neighbor as there is a smaller version of leveled travertine pools, thermal springs, mud baths and fish foot massages, in which little fish eat the dead tissue off of your feet!

The Sultaniye mud baths and thermal springs, located along Köyceğiz Lake in between the town of Köyceğiz and Dalyan in Turkey’s southern Muğla province, are the country’s most visited mud baths and are said to have been visited occasionally by the Egyptian queen back in the day. But in this case, Cleopatra is in good company as headlines have cited the likes of Spanish Prince Felipe De Carlos, Sting, David Bowie, Jack Nicholson, Dustin Hoffman and Robert Maxwell to have bathed in the mud and thermal springs at Sultaniye, which continues to be a popular tourist stop today.

Literally lining Köyceğiz Lake, the Sultaniye mud baths and thermal springs are most regularly visited by one of the quaint ferry boats that set sail from Dalyan and Köyceğiz. The boats have been specially designed to have shallower bottoms and covered propellers due to the connecting Iztuzu Beach being a popular nesting ground for Caretta carettas, also known as loggerhead sea turtles. The sea is connected to Köyceğiz Lake via a maze of reeds that lead to the channel that borders Dalyan. The thermal baths and the beach are well-serviced by the area’s unique ferry boats, which are actually adorned with signs saying they are “Captain June approved,” referring to the famous British expat who still lives in Dalyan and is well into her 90s. Decades ago, she along with others rallied to protect the beach from development.

While also accessible by vehicle via Ekincik, arriving by boat you get the mystical view of the green domes that house the thermal baths. The mud bath is outdoors in a huge pool that you can wade in. Once you’re covered in mud, you can lie down on the edge of the lake and see if you can spot giant turtles passing by. I know I did! After the mud bath, then head for the thermal baths, of which there are a few serving as hot water pools both outdoors and housed inside domes.

Gökçeada, Turkey and the world’s first island to be named a Cittaslow slow city, has just as much history as its spectacular nature including a salt lake that leads into the sea at Eşelek, which neighbors the beaches of Aydıncık and Kefalos, a region famed for its roaring winds, making it one of the country’s top windsurfing and kitesurfing destinations.

The island is located in Turkey’s western Çanakkale province and is accessible via boat from the city of Çanakkale or Eceabat, if driving from Istanbul. There are remnants of a castle built during Suleiman the Magnificent’s reign, a running waterfall at Marmaros, Turkey’s first-ever underwater marine park and the Peynir Kayalıkları rock formations that resemble blocks of cheese. With a coast spanning 95 kilometers, it is Turkey’s largest island. The town itself shows harmonious remnants of its Greek and Turkish heritage and has the cuisine to match, plus the fact that the agricultural practices on the island are nearly exclusively organic.

A view of the island Gökçeada. (Shutterstock Photo)

As for the mud, the mud baths in Gökçeada are all natural, you just go to where the salt lake meets the sea, let your skin seep in the mud as you lie on the beach and watch the colorful kites and sails of the daredevils chasing the wind on the water and then take a refreshing soak in the sea to wash it all off.