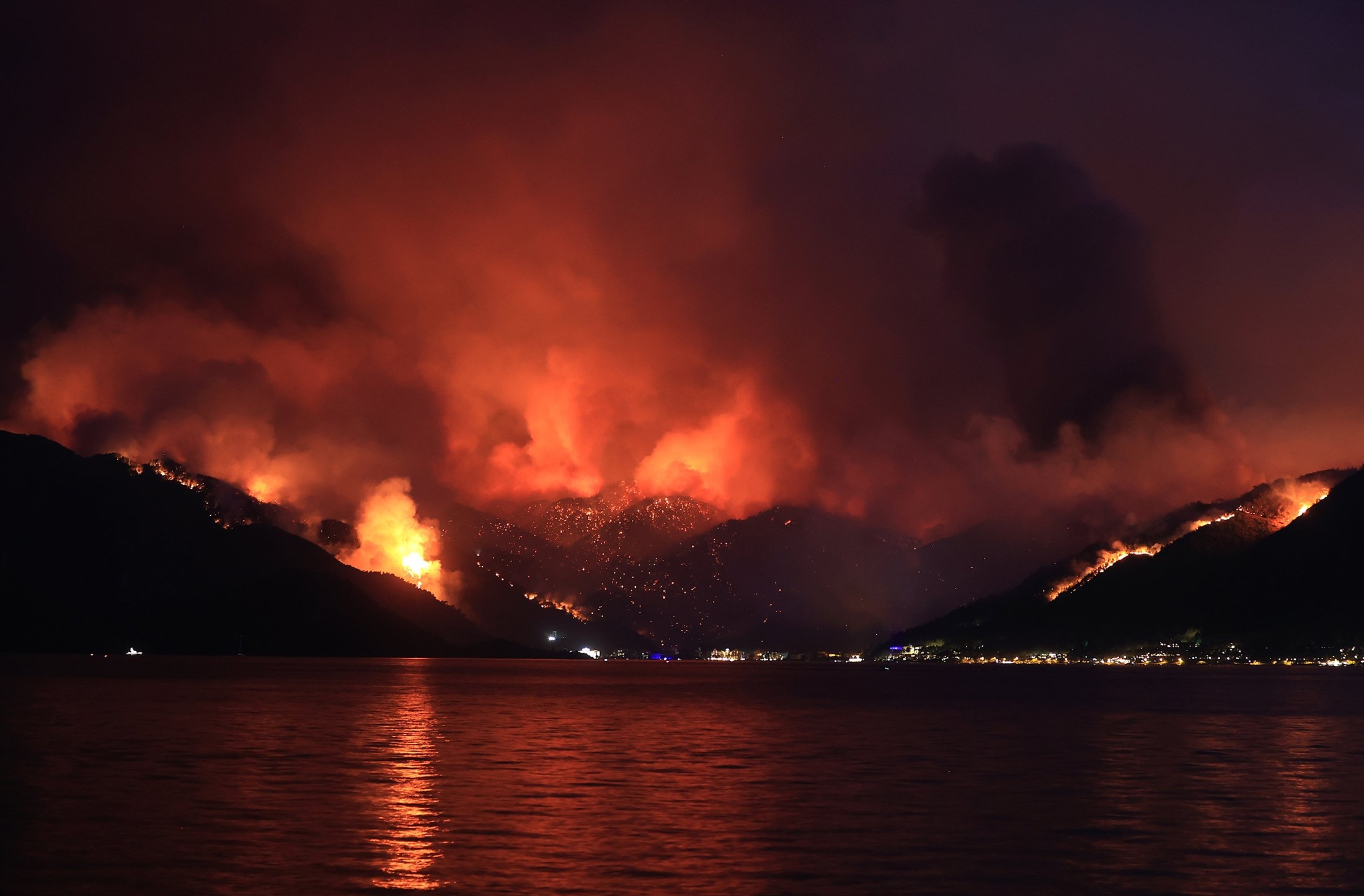 A small number of the forest fires that started on Wednesday and Thursday, mostly in Turkey’s south, are still raging on Friday while dozens of others are “under control,” authorities say.

Fires erupting one after the other are usual during forest fire season when temperatures are at their highest, but the damage was unprecedented this time, with flames devastating entire villages. They raised suspicions that the PKK terrorist group, which was involved in similar fires in the past, might be behind them, though investigations are still underway.

The wildfires were particularly damaging in the vacation resort towns of Antalya and Muğla and quickly spread due to strong winds. Mersin, Adana and Osmaniye, three neighboring provinces in the south, also witnessed massive fires since mid-week.

The death toll from the fires rose to four late Thursday when a young man trying to aid firefighters died after getting caught in the middle of a fire in Marmaris, a vacation resort town in the southwestern province of Muğla. The other three deaths reported on Thursday were residents of Antalya who were unable to escape from fast-spreading fire in villages.

The wildfire that started in Antalya’s Manavgat on Wednesday left a trail of destruction in its path, burning down houses, especially in villages. It grew by Thursday when another blaze broke out in Akseki district neighboring Manavgat, further fanning the flames. Strong winds are challenging the extinguishing efforts carried out by firefighters on the ground and from planes and helicopters.

A delegation of ministers has been in Antalya since the first fires started. Ministers assured the public that fires were largely under control at a press conference in the province on Friday. The Minister of Agriculture and Forestry Bekir Pakdemirli said 57 out of 71 fires were “brought under control” and that they were using three airplanes, 38 helicopters and 680 fire trucks to battle the flames. He said some 4,000 workers were on the ground for extinguishing efforts.

Pakdemirli said the fire that broke out in Marmaris caused “minor damage” and was not a threat to residential areas. He noted that the flames “were heading towards the sea.” Footage and photos from the town showed thick smoke and flames rising over a forest behind an area dotted with hotels on the shore. Similar scenes were also witnessed in Bodrum, another popular vacation resort, where flames reached trees behind a large seaside hotel. Tourists in the hotel were evacuated via boats.

Pakdemirli also said that law enforcement agencies and the judiciary were launching investigations into the causes of the fire and they would make statements based on the course of the investigations. In the Marmaris fire, two children accused of starting the blaze were brought to a police station to testify. The children told police that they were burning old books in a forest when flames started to spread and they could not put them out and fled. Turkey’s Presidential Communications Director Fahrettin Altun tweeted on Thursday that “those responsible will have to account for the attacks against nature and forests.” Following the fires, several provinces ordered a ban on visitors to the forests.

The minister also dismissed allegations that Turkey did not have enough planes to fight the fires. He said helicopters were more efficient in containing the fires. “It is not important what you have in the air. What matters is their capacity of dumping enough water to the ground to put out the fires,” he said. He also said burned areas would soon be open for forestation again, noting that the public sought sapling and tree donations in the aftermath of the blazes.

Pakdemirli underlined that all people affected by the fires were being aided and that all their debts to the state, from social security payments to loans, will be postponed. The government will also start delivering cash on Saturday to people whose residences were damaged or destroyed in the fire.

Foreign Minister Mevlüt Çavuşoğlu, a native of Antalya, also pledged state aid for locals, noting that coordination centers were set up in the region for aid efforts. He said that the ministries already started funneling money to the region and so far, a budget of $2.7 million (TL 23.5 million) had been allocated and more would be delivered. He said individual donors also mobilized and the Antalya Governorate designated an account for donations to the survivors.

Though casualties were low, survivors say the ordeal was unprecedented. Most victims were people living in villages and rural parts of provinces. Some lost their houses and others lost livestock, their main livelihood. Fires also destroyed farms and fields.

Süleyman Düzenli, a 64-years-old bedridden man, was among the victims who suffered burns and smoke inhalation in Manavgat. Düzenli was with his daughter in their home in Ulukapı neighborhood. “We never thought the flames would reach as far as our house but all of a sudden, the back of the house caught fire,” Düzenli told Anadolu Agency (AA) on Friday from his hospital bed. His daughter failed to carry him outside but a gendarme unit coordinating evacuations came to their rescue. Düzenli said he does not remember the minutes after he was evacuated as he passed out. He later found out that his heart “stopped” when he was taken to the hospital and he was resuscitated. “I lost everything, even my medicine. I could only grab my cellphone. But I thank God for being alive,” he says.

Ibrahim Aydın is hospitalized for smoke inhalation as he was trying to put out the fire by himself, like other villagers who used their tractors and water tankers to confront the flames. “The gendarmerie warned us to leave but we did not heed their call and tried to save our belongings. I failed anyway. Everything I had was burned to the ground. I lost lambs and other animals,” he said. Aydın said he has “never seen such a fire before … This is not normal. This was like hell. Many people fell ill of smoke inhalation. We are glad to be alive but we lost many things.”

Hatice Tekin was hospitalized for smoke inhalation and says nobody has seen such a big fire. “There were flames everywhere. One fire broke out in some place and then, another came from somewhere else. We had 100 houses in our village and 70 of them were completely burned,” she said.

Mehmet Uysal suffered burns to his hands and feet while trying to set his livestock free. Uysal says his 40 sheep and goats and 25 cows were killed in the fire. Hayriye Öksüzoğlu says she could grab only a few clothes and a bottle of water before fleeing her burning house. She lost her four goats in the fire. “I feel very sorry for them. I tried to release them from the stable but I could not,” she lamented.

Turkey, which seeks to increase the number of its forests, faces a heightened threat of fires, especially in the summer. The causes of fires vary, and along with arson, stem from the haphazard disposal of flammable material in the forests. In recent years, the country has modernized its fire response crews and has improved training for firefighters. Last year, fires across the country damaged 20,971 hectares (51,828 acres) of forests. Earlier this month, two forest fires that continued for days gutted forests in Hatay and Mersin.