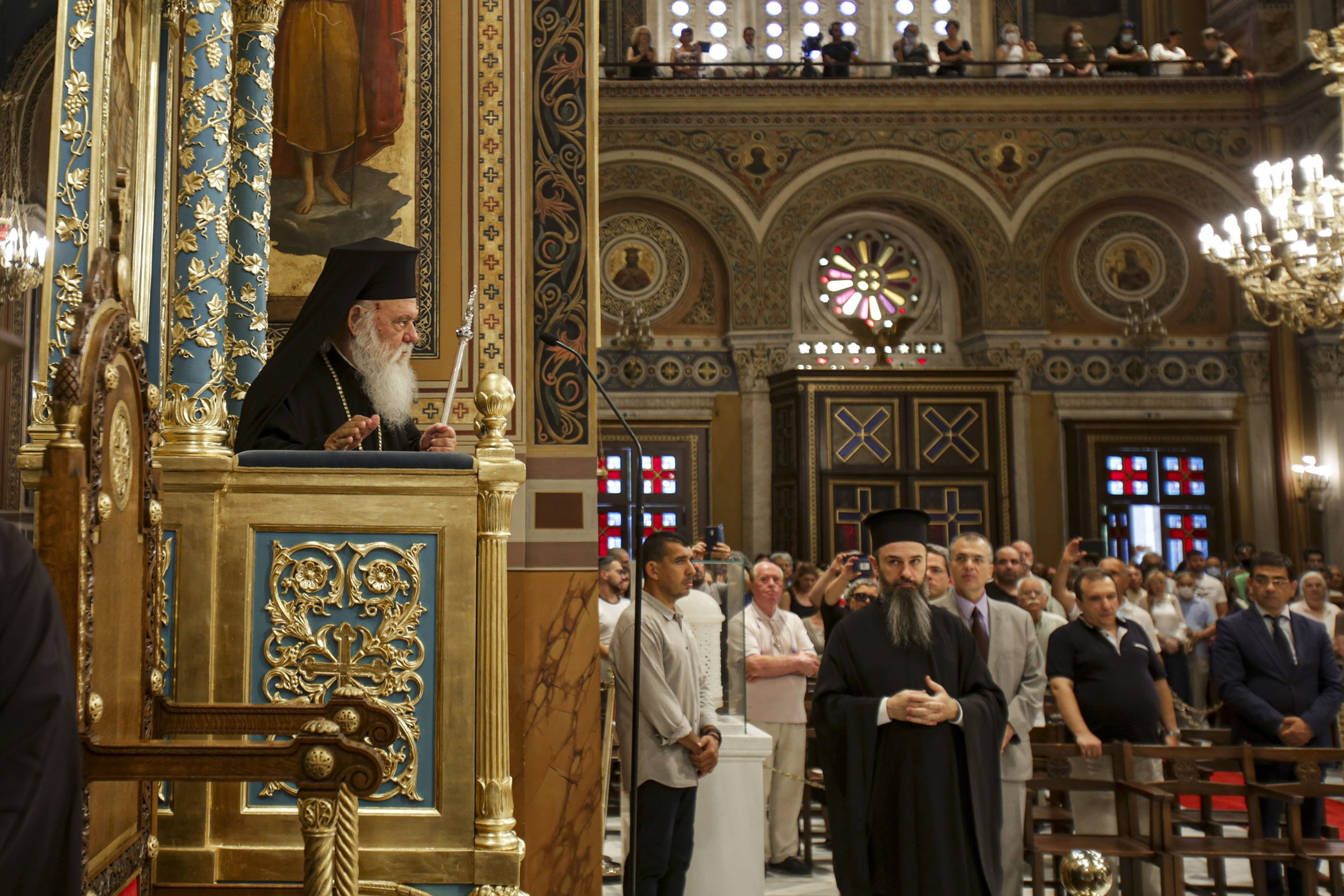 Greek Muslims condemned Archbishop Ieronymos II of Athens for attacking Islam on Saturday, stating that a more “constructive” rhetoric is needed for a peaceful environment, especially in contemporary days plagued by the pandemic.

In a statement shared on the council’s Twitter account, the council said: “We hope a more peaceful language to be used instead of anti-Islamic discourse in such difficult times of pandemic.”

(2/2) We hope a more peaceful language to be used instead of anti-islamic discourse in such difficult times of pandemic.

Xanthi Turkish Union, on the other hand, said that Ieronymos’ remarks are not only an “Islamophobic attack” but also a “hate crime.”

“The fact that these statements, filled with insults, came from the number one name in the Greek church increases the gravity of the situation,” the union said in a statement shared on their website.

“We see this move as one of the typical examples of the rising Islamophobia and xenophobia in Greece in recent years,” the union continued, adding that Ieronymos needs to correct his words and apologize sincerely.

Similarly, the Western Thrace Imam-hatip Schools Graduates and Members Association (BIHLIMDER) referred to the archbishop’s words as an outcome of “ambition and jealousy.”

“We are leaving the examination of the psychological state of this person, who uses words that even the most ordinary people wouldn’t use, to the experts. We are condemning such a hostile attitude,” the association said, calling on Ieronimos to apologize to not only Muslims but also all of humanity for his hate crime.

The Association of Western Thrace Minority with High Education (BTAYTD), in their statement, highlighted that the archbishop’s remarks have no relation to any theological or historical facts.

“We would like to express that the fact that such a thought was mentioned by a man of critical and important position, especially a man of the clergy, created sadness and surprise among us,” the association said.

Ahmet Ibram, deputy head of the province of Eastern Macedonia and Thrace, also reacted to the statement, referring to them as “unacceptable.”

“One of Islam’s basic beliefs is to have life based on peace between religions. It can never be accepted to have grudge and hostility against other religions’ members,” Ibram underlined.

The archbishop said on Saturday in a televised speech that “Islam is not a religion but a political party and pursuit, and its followers are people of war.”

“They are the people who spread, this is characteristic of Islam,” he continued, referring to Ottoman Sultan Mehmed II, known as Mehmed the Conqueror, who conquered Istanbul back in 1453, causing the Byzantium Empire to collapse.

The opening of Athens’ first official mosque, in Athens, Greece, on Nov. 2, 2020. (Photo by Getty Images)

The country’s unwelcoming stance toward its Muslim population is not a new phenomenon. For instance, up until recently, Athens was known as the only European capital without a mosque, even though there are an estimated 300,000 Muslims in the greater Athens area. Back in November 2020, for the first time since the 19th century, Athens witnessed the inauguration of an official mosque, as years of efforts by the Muslim community finally paid off.

Greece was under the rule of the Ottoman Empire for centuries, until 1829 when the Greek population succeeded in gaining independence from the empire. At the time, there were many mosques and other Ottoman architecture all over Greece. However, the riots and independence triggered a wave during which all such architecture was damaged or removed, eventually leaving Athens without any mosque.

In fact, Athens’ lack of mosques is a norm for the majority of the Greek cities as the only officially sanctioned mosques in the country are in the northern border region with Turkey where up to 150,000 members of a Muslim minority live.

Greece’s move to finally open a mosque in Athens took place months after Turkey’s decision to revert Hagia Sophia into a mosque.

The iconic structure was first built as a church before it was converted into a mosque after Istanbul’s conquest by the Ottomans in 1453 and remained as such for nearly 500 years until it was converted into a museum in 1934. On July 10, a Turkish court annulled a 1934 Cabinet decree that had turned Hagia Sophia into a museum, paving the way for its use again as a mosque after an 86-year hiatus. Thousands streamed into the mosque, now called Grand Ayasofya, on July 24, from the country’s leaders to visitors from around the world.

As a response, Greek Prime Minister Kyriakos Mitsotakis said at that time that what was happening in Istanbul was “not a show of force but proof of weakness.”

Turkey has long decried Greek violations of the rights of its Muslim and Turkish minority, from closing down mosques and letting historic mosques fall into disrepair, to refusing to recognize Muslims’ election of their own muftis.

These measures violate the 1923 Treaty of Lausanne as well as the European Court of Human Rights (ECtHR) verdicts, making Greece a state that flouts the law, say Turkish officials.

Similarly, the election of muftis, or Islamic clerics, by Muslims in Greece has become yet another point of issue that caused trouble for the Muslims in the country. Even though it is regulated by the 1913 Treaty of Athens, a Greek-Ottoman Empire pact that was implemented by Athens in 1920, that the community will be able to elect their own muftis, in 1991, in violation of international law, Greece annulled the treaty and unlawfully started to appoint the muftis itself. The muftis appointed by the Greek state have since usurped local Muslims’ right of jurisdiction on family and inheritance matters. The majority of Muslim Turks in Western Thrace do not recognize muftis appointed by the Greek state and instead elect their own.