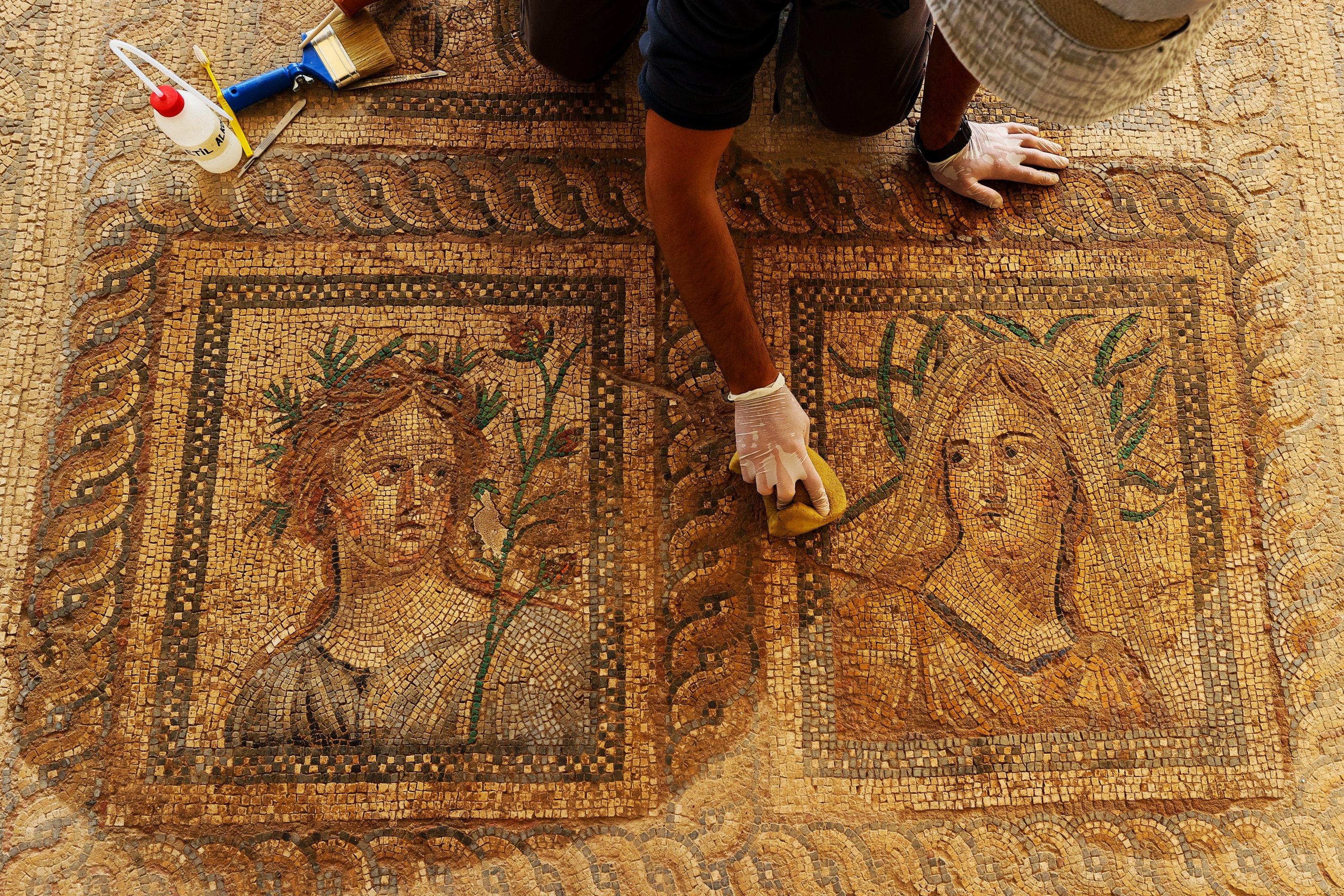 Thanks to the diligent work of restorers, mosaics depicting Eros, the Greek god of love, Dionysus, the Greek god of fertility, theater and merriment, and his wife Ariadne have been restored to their former glory in the ancient city of Metropolis in the Torbalı district of the western Izmir province.

While excavations are sustained throughout the whole year in Metropolis by the Ministry of Culture and Tourism and Manisa Celal Bayar University to unveil the secrets of the city, the restoration of the spellbinding mosaics was completed with the use of modern techniques. The state-of-art techniques have provided the mosaics with a fresher look and also ensured the preservation of their stones and colors.

The mosaics that have been restored also feature depictions of masks, the symbols of theater, and fish and bird figures that describe the fertility of the region along with Eros, Dionysus and Ariadne.

The head of the excavation in Metropolis, Prof. Serdar Aybek told Anadolu Agency (AA) that Metropolis, which has fertile lands, unites Central Anatolia and the Aegean, and therefore has hosted many civilizations in the past. Noting that Metropolis stands out because of its mosaics, Aybek said: “We found the mosaics in the area (that) we believe to be a guesthouse and sustained their restoration here as well.”

Stating that the guesthouse where the mosaics are located is connected with the theater, Aybek added, “We think that the guests who came to the Metropolis for the theater were hosted here. Therefore, Dionysus, who is known as the god of theater and entertainment, his wife Ariadne and Eros were often used in the mosaics on the floor of this house. We see great delicacy in the mosaics. In these mosaics, which are almost like a painting, shadow, toning and even facial expressions are conveyed very successfully and strongly.”

According to the excavation head, love is emphasized in the mosaics. “Dionysus and Ariadne are looking at each other in the mosaics. There is Eros between them. This is actually a message of love transmitted from about 1,800 years ago.”

The history of Metropolis, known as the “City of Mother Goddess,” stretches from the first traces of Late Neolithic settlements to the Classical Age, from the Hellenistic Age to the Roman and Byzantine periods, the Anatolian beyliks (principalities) and the Ottoman era.

Through the excavations carried out to date, a Hellenistic theater, a Bouleuterion (parliamentary building), a stoa (columned gallery), two bath structures built during the Roman Empire, a bath and palaestra (sports area) complex, a special hall with mosaics, a peristyle house and cisterns that form the historical texture of the ancient city have been found.

In addition, during the excavations of these places, more than 11,000 historical artifacts, including ceramics, coins, glass, architectural pieces, figures, sculptures, bone and ivory artifacts along with various metal items, were unearthed. The artifacts obtained during the excavations are exhibited at the Izmir Archeology Museum, Izmir Museum Of History And Art and Selçuk Ephesus museums.