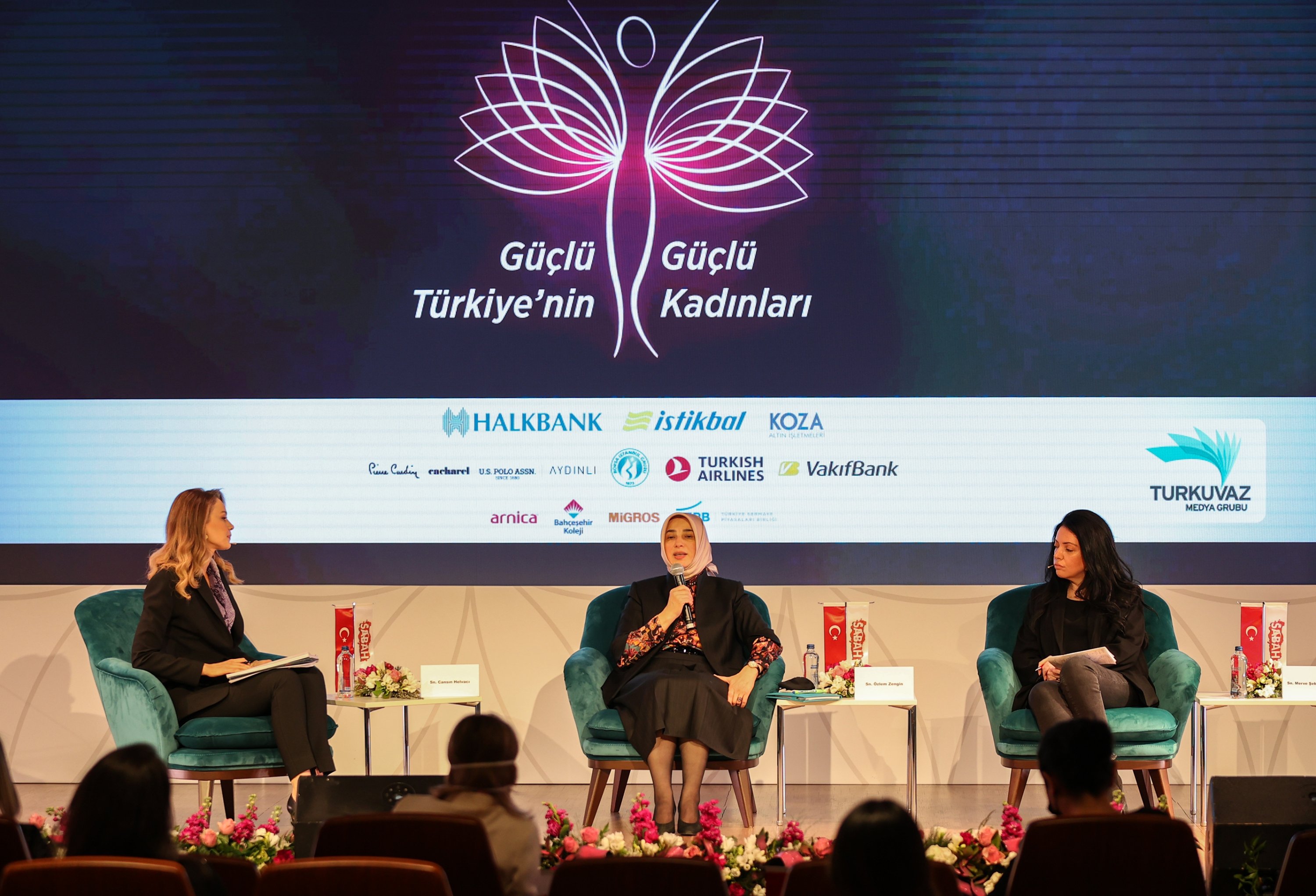 Ahead of International Women’s Day, a summit in Istanbul brought together prominent women from all walks of life on Thursday. From first lady Emine Erdoğan to politicians, businesspeople, actors and sports figures, they discussed the role women play in the country’s progress and growth.

Women still lag behind men in terms of employment and pay but Turkey, pursuing economic growth, is seeking to change this trend. As awareness to gender equality rises, they also inspire young girls with their success stories. The Strong Women of Strong Turkey summit, hosted by Turkuvaz Media Group’s Sabah newspaper, delved into women’s roles and progress in various fields, from sports to politics and business.

In a video message to the summit in Istanbul, Erdoğan said she believed that increasing “woman power” in Turkey would also help resolve global problems.

“Turkey achieved progress recently in multiple fields and became a leading country in the world. It owes much to women in this success. We draw the power for decisive steps toward our 2023 goals from women,” she said, referring to the centenary of the Republic of Turkey. The country pursues an ambitious, multipronged plan with a 2023 deadline as part of its goals, from economic growth to the improvement of rights. “All of the women who attended this summit are a source of inspiration for all of us and what they’ve done so far is a sign of the bright future awaiting us,” she said.

“Women have been at the forefront of accomplishments throughout our history, from their work in national defense to their contribution to the economy. We won our War of Independence with women fighting alongside men. Women had the right to vote and to be elected long before other countries granted those rights to women,” she added.

Turkey strives to boost women’s roles in society, and it has succeeded in largely changing a patriarchal mindset that hurt the progress in some parts of the country. Women are still getting paid less than men no matter how educated they are. Turkey, like the rest of the world, strives to close the pay gap between men and women, as well as to include more women in the workforce. Gender equality and affirmative action for women are high on the government’s agenda.

Speaking at the summit, Pekcan said that tapping into women’s potential would definitely help Turkey to reach its growth goals. “This year’s theme set by United Nations for International Women’s Day is ‘women in leadership: achieving an equal future in a COVID-19 world.’ Enterprises and leadership run by women bear significance for women to have more equal opportunities,” she said. The minister noted that although Turkey has seen accomplishments in the field, more needs to be done. “We focus on having women in every field, from social life to economy and culture, in a more efficient, equal way, to sustain their lives and achieve their ideals without having to deal any discrimination, exclusion or mistreatment,” she said. The minister noted that digitalization in the global economy and easier access to information and sources brought forth new opportunities for easier empowerment for women. “We have back those new opportunities with legal infrastructures and set the proper ecosystem to improve the status of women,” she said.

Pekcan said her ministry cooperates with the private sector and nongovernmental organizations to improve women’s role in economic life. “We are trying to create a network of female entrepreneurs and reach out to entrepreneurs in all provinces. So far, our network brought together 1,400 entrepreneurs in 47 provinces. We also run an Export Academy program to train and advise women seeking to export goods they manufactured and have trained more than 4,000 entreprenerus so far,” she said.

Along with employment issues, women face another obstacle: domestic violence. Though legal measures and police protection curbed the cases of violence, which occasionally ends with fatalities, it still plagues women’s efforts for more inclusion in social and working life, according to Selçuk who spoke at the summit. Selçuk said the government has a zero tolerance policy on violence and sought to eliminate the murders of women. “We believe we can overcome it with the support of nongovernmental organizations, the entire society and media,” she said.

Selçuk stated that women have come a long way in overcoming obstacles on their paths, giving the example of the cruelty headscarf-wearing women suffered during the period before and after the infamous 1997 coup. “Thousands of girls could not attend school because of their headscarf. They were deprived of the right to education and faith. But this dark period has been buried deep in history now thanks to the resolute struggle of women,” she said. She also noted that girls’ education has seen progress, with schooling campaigns and education aid. “In higher learning alone, the schooling rate has tripled for women in the past 18 years,” the minister said.