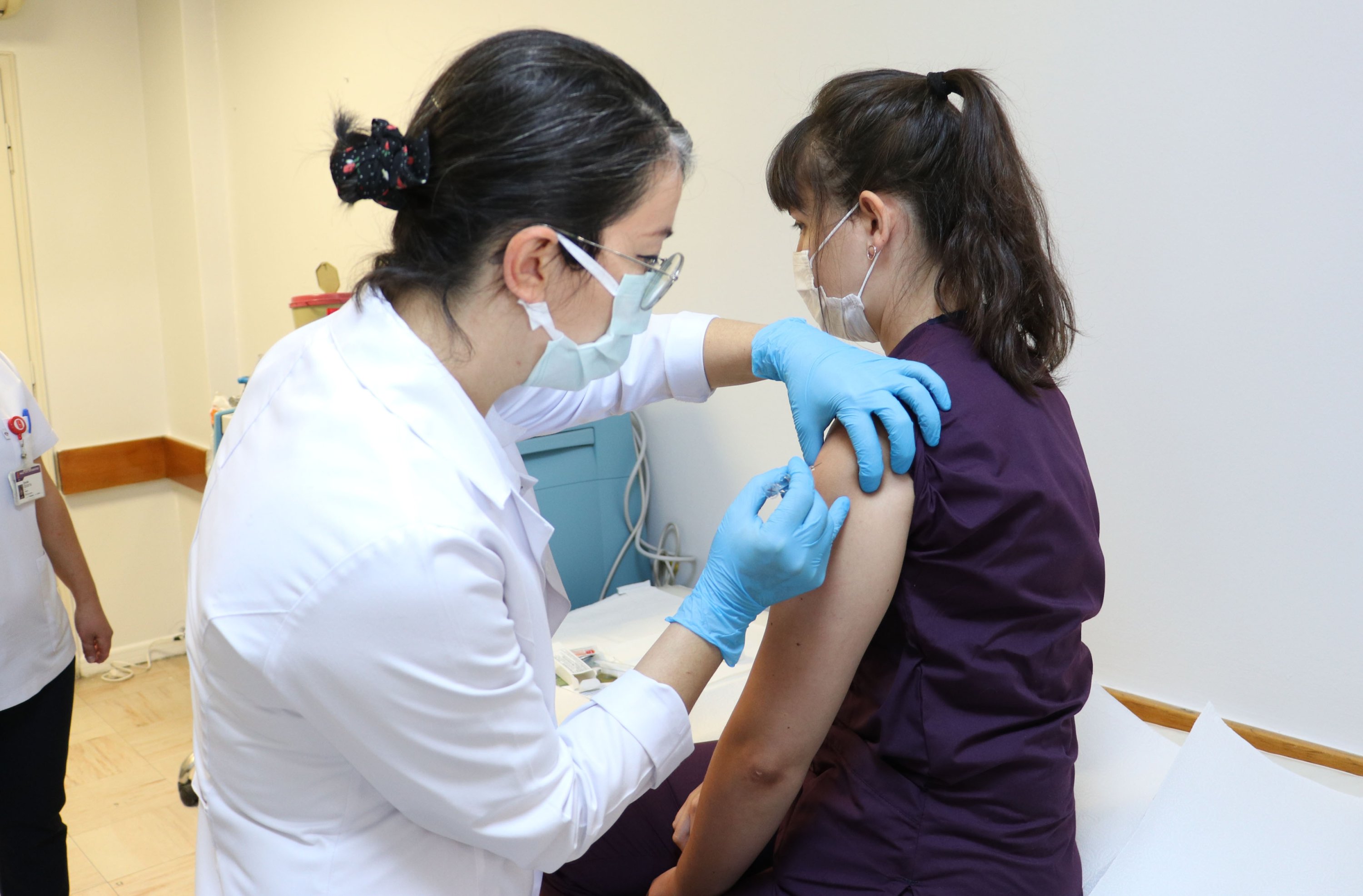 The vaccine will be administered to between 1,200-1,300 health workers over 10 days, with a second dose given 14 days after the first, broadcasters CNN Türk and Habertürk said.

The results of the trial will be sent to the World Health Organization (WHO). The vaccine candidate will later be administered to volunteers with chronic diseases, with the aim of vaccinating 13,000 people, the broadcasters said. The Health Ministry did not comment on the reports.

Demirören News Agency (DHA) reported that the first volunteers, a group of health care workers, were vaccinated with an inoculation developed by Sinovac at Hacettepe University Faculty of Medicine. Sinovac executive Helen Yang and Health Ministry Coronavirus Scientific Advisory Board member professor Serhat Ünal were among those who observed the vaccination work. Ünal said it was “a historic moment.”

“This is a vaccine tried on at least 10,000 people around the world so far,” he told DHA. Ünal said the trials had been approved after two months of evaluation by the Health Ministry’s ethics committees.

Meanwhile, he said another vaccine, which has been developed by Hacettepe University, will also be ready for animal trials soon. “The (Chinese) vaccine will be tested on more than 10,000 volunteers, and if it passes the tests, production will begin,” Ünal said.

Yang told DHA that they had first launched Phase 3 trials in Brazil after development began in January, while another Phase 3 trial was underway in Indonesia.

Health Minister Fahrettin Koca announced last week that Phase 3 work had begun on the Chinese candidate vaccine, as well as another developed by Pfizer. Russia’s application to conduct Phase 3 trials in Turkey for its experimental vaccine was being evaluated, while a decision would likely be made this week, he said.

China is administering experimental coronavirus vaccines to tens of thousands of its citizens to great international interest. China launched a vaccine emergency use program in July, offering three experimental shots developed by a unit of state pharmaceutical giant China National Pharmaceutical Group (Sinopharm) and U.S.-listed Sinovac Biotech. A fourth coronavirus vaccine being developed by CanSino Biologics was approved for use by the Chinese military in June.

Turkey seeks to develop a vaccine itself, with three studies having gone beyond the animal testing phase so far. Authorities recently announced that a vaccine could be available in early 2021. Some 18 studies are underway in the country, eight for vaccine development and 10 for drugs. A government-backed platform coordinates the studies.

Public negligence remains a key concern in the fight against the coronavirus pandemic. Authorities are juggling between expanding normalization measures and implementing stricter rules aimed at containment, with the Interior Ministry leading the way. The ministry announced Wednesday that more than 3.3 million inspections had been carried out nationwide since Aug. 22, while 20,094 people have been caught violating self-isolation rules for COVID-19 patients.

Though measures against the pandemic have been largely relegated to governorates, often specific to each province, the government frequently issues new instructions to coordinate a more efficient struggle against the disease.

Weekly nationwide inspections have been a staple of daily life since last month. Each province has also set up inspection centers working around the clock against violations of rules, from social distancing to mask requirements. Centers are staffed with personnel specialized in each type of trade for more effective inspection, while “neighborhood inspection teams” check areas with potential crowding, using security footage and patrols of potential trouble spots.

The Interior Ministry said hotlines and an app allowing the public to give authorities tip-offs regarding people and businesses violating anti-pandemic rules have received more than 116,000 calls so far.

Along with those violating self-isolation orders, inspection crews have issued warnings to more than 40,000 people/businesses against violations, and another 9,974 people/businesses have been fined. Some 178 businesses were temporarily closed down for violations, with the ministry implementing a three-strike system.

The first strike is accompanied by a warning, while second-violations incur a fine, and for businesses, a third strike leads to temporary closure.

Turkey reported 1,742 more cases of the coronavirus and 1,202 recoveries Tuesday. “The number of our active patients and patients in critical condition continues to increase,” Health Minister Fahrettin Koca said on Twitter.

The country’s overall infection count now stands at 294,620 – including 261,260 recoveries, according to Health Ministry data. The death toll from the pandemic in Turkey has risen to 7,186, with 67 new fatalities reported since Monday.

A total of 110,412 more coronavirus tests were conducted over the past 24 hours, pushing the total up to over 8.74 million.

The number of patients in critical condition now stands at 1,327, the data showed. Of those infected, 7.1% suffer from pneumonia, the ministry figures showed.

“The number of those who have recovered can exceed the number of our losses only with caution,” Koca added.