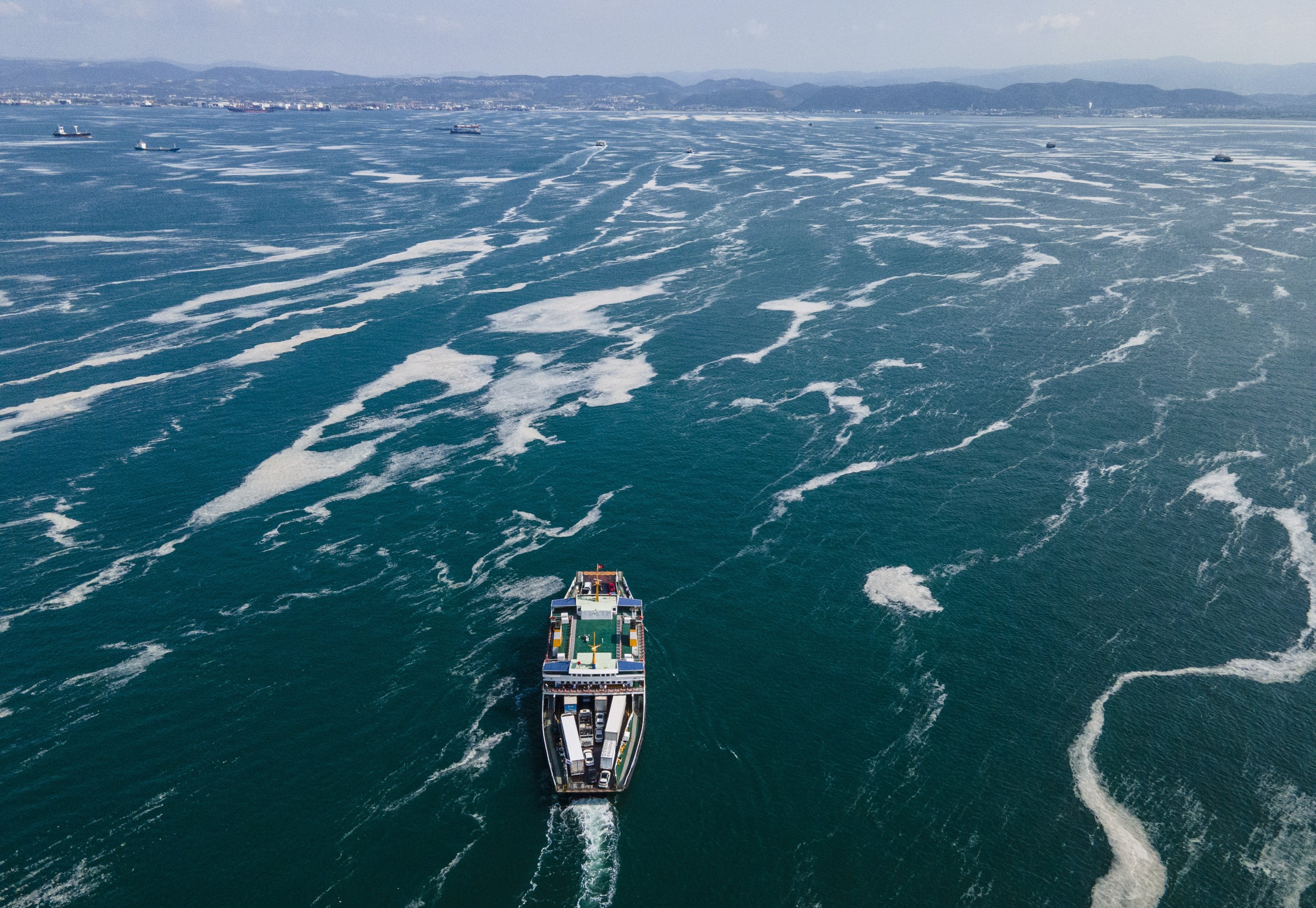 Turkey has cleaned 1,197 cubic meters (42,271 cubic feet) of mucilage from the Marmara Sea, Environment and Urbanization Minister Murat Kurum said in a statement on Sunday.

Kurum said that operations to clear the sea of the substance, known colloquially as “sea snot,” are ongoing at 77 locations, adding that the collected mucilage had been sent for disposal.

Turkish authorities this week announced a 22-point action plan to clear a surge of mucilage covering parts of the Marmara Sea in the country’s northwest.

Kurum, who launched the cleanup campaign on Istanbul’s Caddebostan coast, told Anadolu Agency (AA) that it was the biggest maritime cleanup campaign in Turkey. “Our work will eliminate the visual pollution and the smell in the Marmara and help sunlight reach the bottom (for growth in the underwater ecosystem). Our work will be helpful to keep it clean, and I want to assure the public that we will make the Marmara clean again, with a spirit of mobilization,” he said.

Meanwhile, Turkey’s Parliament has also agreed to set up an all-party committee to investigate the slimy, floating mass of yellowish-white sea mucilage.

The mucilage has also infiltrated portions of the adjoining Aegean and Black Sea.

In a rare show of unity, the five parties represented in Parliament agreed to a joint committee that would investigate the cause of the outbreak and propose measures to combat it.

The 19-member committee is to complete the probe within three months.

President Recep Tayyip Erdoğan, who has vowed to rescue the Marmara, has blamed the outbreak on untreated waste dumped into the sea and on climate change.

The circular showed that all state institutions – including governorates and municipalities of provinces in Marmara such as Istanbul, Kocaeli, Bursa, Balıkesir, Tekirdağ, Yalova and Çanakkale – and environment-focused foundations like the Turkish Marine Environment Protection Association (TURMEPA) plus other institutions will participate in the committee, the document added.

According to the circular, the committee will meet at least once a month and will also gather if invited to the table out of necessity.

“All support and assistance that may be needed will be meticulously provided,” Erdoğan concluded in the official document.

Istanbul, Turkey’s largest city with some 16 million residents, and five other provinces, factories and industrial hubs border the sea.

A clean-up effort was launched this week with teams skimming and removing some of the sea snot from the water.

Sea snot has dealt a huge blow to fishing, the main income for thousands in the Marmara, with fish turning up dead in areas affected by the mucilage. Although experts say the snot does not leave “poison” inside the fish as previously presumed, fishermen have complained of a drop in sales. Sabah newspaper reported that fish sales in the Marmara provinces decreased 70% after the news of the sea snot. Though fishing season, which otherwise started out well, is now over, fishermen say that if the mucilage lingers, the new season may see a further drop in sales. Authorities say it may take at least one year to clean up the sea snot. Elsewhere, sea snot also threatens tourism, with reports of mass cancellations of bookings at hotels and similar venues in popular vacation spots, from Istanbul’s Prince’s Islands to Erdek and Çınarcık on the southern shores of the Marmara Sea. Real estate agents also report a lull in sales and rentals of summer residences in areas along the shores.

The mucilage – mostly accumulated in Mudanya, Gemlik Bay, Gebze and its surroundings, the coastal areas of Istanbul’s Anatolian side and around the Princes’ Islands – also partially covered the shores of the Marmara Sea.

The substance covering the central coast of Turkey’s northwestern Yalova province was dispersed by the wind to coastal areas of the Çınarcık and Armutlu districts as well as the town of Esenköy, which are important touristic hubs.