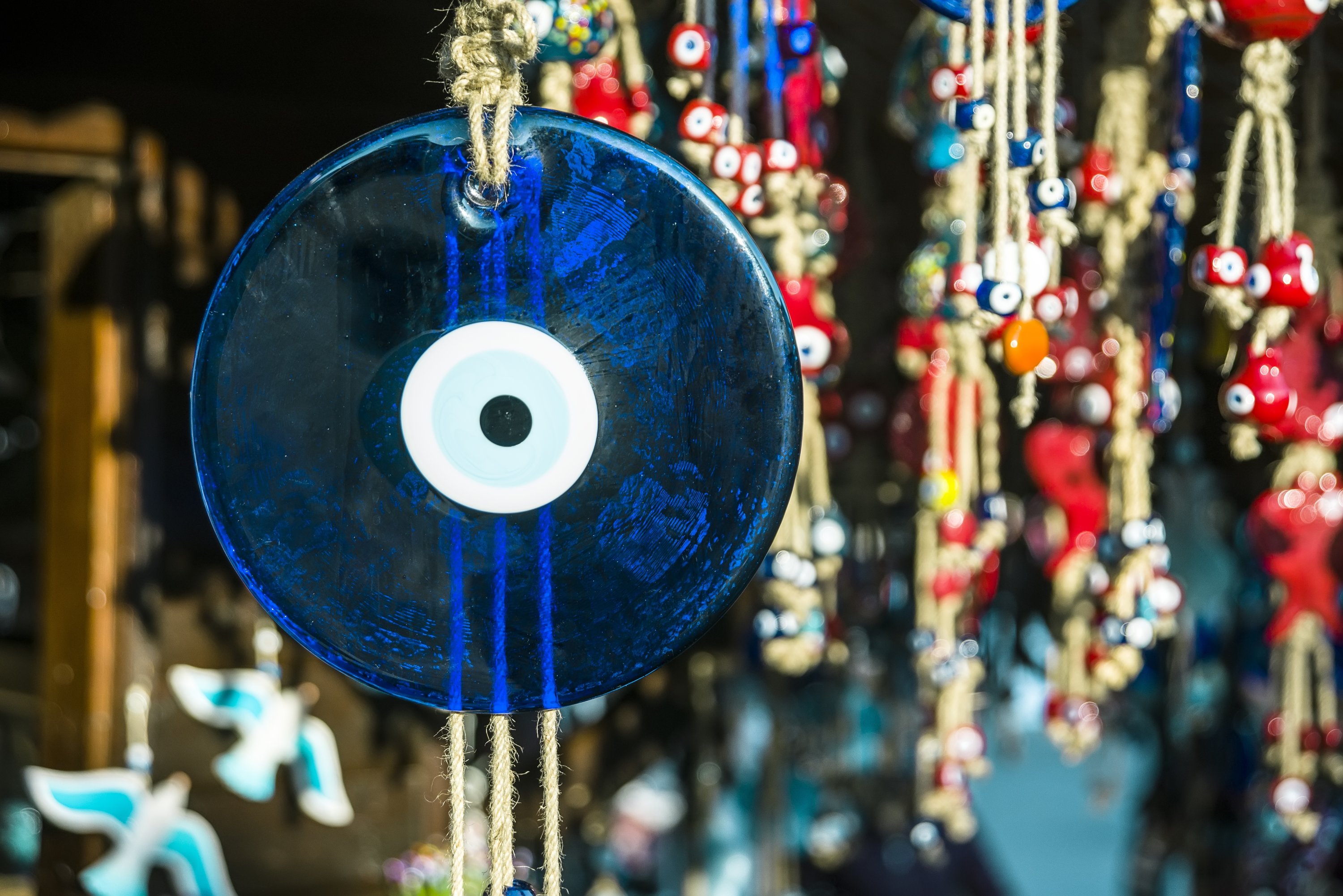 Luckily in Turkey, there are a number of beautiful ways to protect oneself and others from the ever-present “evil eye” and “nazar,” the term used to describe the negative consequences resulting from its gaze. Overlapping with these concepts central to the country’s culture, there are a wide variety of talismans and amulets across Turkey that are worn as jewelry or used to decorate homes.

The following is a list of the most significant “good luck charms” in Turkey and the traditions and superstitions that surround them.

The evil eye is everywhere

Dating back to at least the sixth century, the concept of the evil eye as a protective talisman persisted throughout Greek classical antiquity, the Phoenicians the Persians, the Roman Empire and the Ottoman era. While it is also the most popular souvenir among tourists, the evil eye in some shape or form adorns practically every home or place of business and can be found in the jewelry box of every Turk there ever was. The “evil eye” is generally a blues glass bead or object with a white and black eye at the center. The theory is that they distract from malevolent or jealous gazes, which according to superstition could result in harm or bad luck.

There are a variety of beads available in an assortment of shapes and sizes, with some made from recycled glass. The most minute can be used to adorn jewelry, while beads 1 centimeter in size are fastened to clothes with a safety pin, a regular practice for babies. Larger evil eyes are hung as is or incorporated into wall hangings and can often be spotted hanging from trees.

The evil eye can also be seen hanging in trees. (Shutterstock Photo)

A popular evil eye talisman in Turkey’s Mardin province is the Assyrian evil eye, which either comes in the form of an oval turquoise bead with two horizontal holes to resemble eyes or a circular seven or nine-holed bead. They are often wrapped or embedded in silver or gold and are said to never crack when smashed or dropped. These beads are traditionally worn on necklaces.

In the Mount Kaz (Ida) region of Çanakkale and Bayramiç, there is a popular good luck charm carved from terebinth wood. The terebinth, or turpentine tree, is widely used in Turkey, including as an aromatic for coffee and as a soap used to shampooing hair, but it also serves a more spiritual purpose. The wood is carved into a tiered totem that is said to be the “life tree,” a reference to the wood’s ability to endure all difficult conditions. Smaller versions, which are about 2 centimeters in height, are used as charms on necklaces, while larger versions can be hung up on walls.

On every New Years’ Eve households across Turkey smash a pomegranate in front of their door, a superstition thought to bring prosperity in the year to come. According to superstition, having pomegranate imagery in the home, in whatever form, can be symbolic and will also encourage prosperity.

The Hand of Fatima

Known as “Fatma Ana Eli” in Turkey, the Hamsa in Arabic and the Hand of Fatima in English, the imagery of a hand with an eye in the palm has been used as a talismanic symbol throughout the Middle East. The symbol is believed to protect against the evil eye and encourage goodness, abundance, fertility, luck and good health. This signature hand imagery can be found in ceramic form or in the Iznik Çini style of Turkish porcelain but also as necklace charms and earrings made out of filigree. In Turkish “Telkari,” this form of intricate metalwork in which thin threads of silver or gold are arranged in artistic motifs is a style of jewelry-making traditional in Turkey.

A gold bracelet with a Hand of Fatima pendant. (Shutterstock Photo)

In southern Turkey’s rural areas such as Adana and Mersin, there is a tradition to empty out an egg and place the eggshell on a stick next to planted produce as protection. There is also an art form of carving intricate designs into eggshells that can also be used as good luck talismans and decorative items.

In Turkish “hurma,” the beloved date fruit has always held important significance in Turkey, especially as it is the first food consumed every evening to break the daily fast during the holy month of Ramadan. However apart from religion, there is another superstition that carrying a date seed, especially in one’s wallet, will attract good fortune and prosperity.

“Çörek otu,” which is referred to as black cumin or fennel flower in English, has always been renowned for its health properties and understandably adorns countless pastries and breads throughout Turkey. These seeds can also be carried on someone’s person as a form of protection.